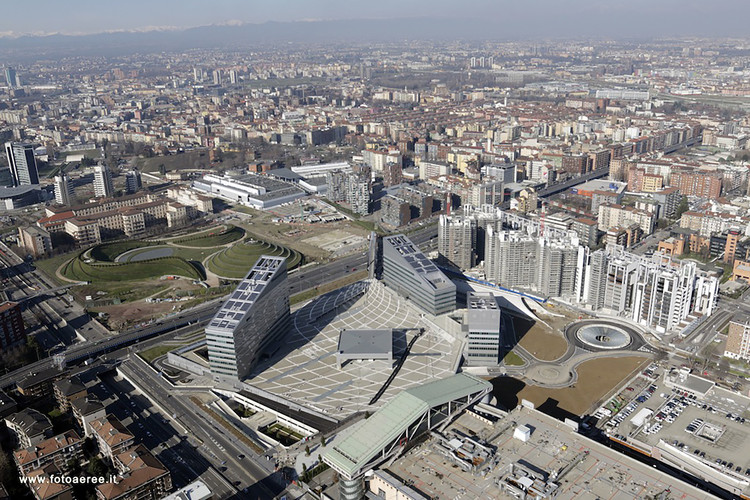 Text description provided by the architects. The new square dedicated to Gino Valle, the focus of the urban development plan of the Portello area, opens to the public at the same time as the inauguration of Expo 2015. The square, the largest in Milan, can now be reached by a cycle path that starts in the CityLife park and which, crossing all the pavilions of the former Fair, passes through it projecting itself towards the parks of the western belt and the area dedicated to the World Fair.

Public space and pedestrian movement are the settlement principles that connect different architectural structures, arranged around a large sloping square that opens up in front of the former building of the Milan Fair.

The square has a wide base, the surface of which rises at a gradient of 5% along the diagonal line oriented at 45 degrees with respect to the bearing of the former exhibition area from where it starts. This diagonal continues along the walkway which leads to the park and defines the main axes of the entire plan of the Portello. The base is structured into two underground levels and one above ground. It houses car parks, services, building entrances, commercial spaces and a restaurant. Therefore it is not a mere walking surface, but a structure equipped with functions, dotted with open air courtyards: a flexible matrix serving all the structures above.

The base supports three buildings which define the square and produce, along with the surrounding buildings, visual overlaps that vary constantly due to their ascending or descending profile. As hinted at by the designers, they thus create three “urban mountains” that mark the profile of the Portello.

Used as offices and for commercial functions, the three buildings irregularly enclose the square, thereby giving rise to a contained space that is at the same time open to the surrounding areas. Their volume, emphasized by the form, is then characterized by an effect of lightness. The panels that clad the façades are opaque on the lower part of the buildings and gradually become clear the higher up they are placed, tending to dematerialize the perception of the upper part of the envelope.

The design of the paving in the square was generated by overlaying the pattern of a regular grid on the walking surface covering it entirely. The grid was then deformed by making it narrower towards the opening that leads to the park, where the space is compressed like a bottleneck and expands in the square to mark its width and expansion. In this deformation the straight lines of the grid become large concentric curves that form a regular pattern without emphasizing the axis of the main direction.

In recent months a bas-relief by Emilio Isgrò titled “Grande Cancellatura per Giovanni Testori” (Great Erasure for Giovanni Testori) was added to the square. The imposing installation (23.40 by 2.47 metres) stems from the elaboration of an excerpt from the book Il ponte della Ghisolfa (The Ghisolfa Bridge) by Giovanni Testori.

The city divided into parts proposed by the plan is confronted with the definition of public space and what designers define as a “kinetic figuration” which establishes relationships between various elements starting with the movement of pedestrians and the times that define the perception of emptiness in relation to the spaces of the built city. 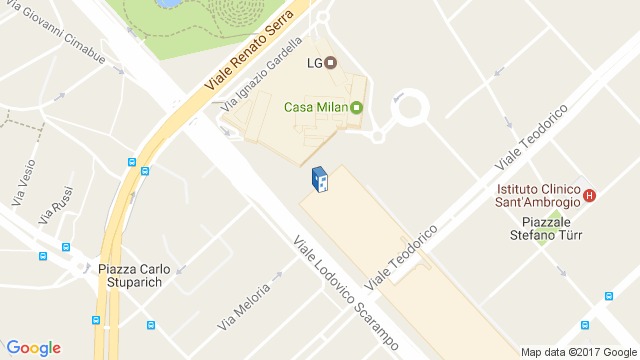 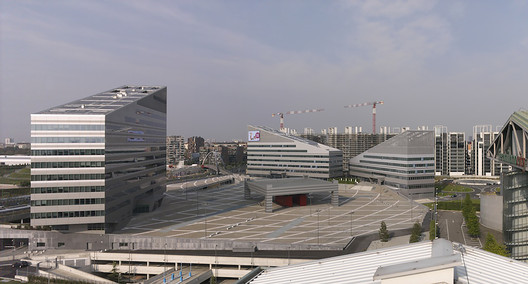 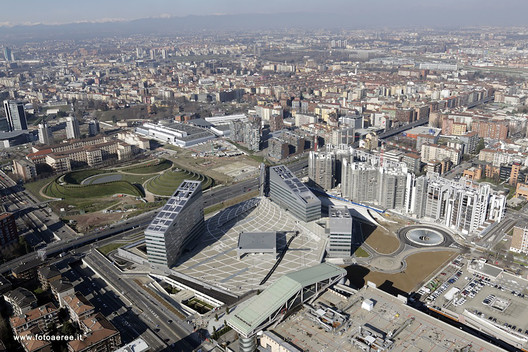