HPP Architects has won a competition to extend the campus of Cologne's University of Music and Dance. Chosen over 13 entries, the winning design will enclose a site in the Kunibertsviertel, close to Cologne’s railway station, and transform it into an "attractive" urban area. The plan, deemed by the jury to be a "clear example of a successful urban remedy," also calls for the conversion of an existing building into an animated concert and dance hall.

"The new building, a compact large format structure, will have its own character. The two new city spaces created, with their clear contours will aid the enmeshing with the existing structures and underscore the campus concept,” says HPP Partner Remigiusz Otrzonsek.

Enveloped with a perforated aluminum skin patterned after the perforated cards used to store electronic music in the early part of the 20th century, the refurbished building will be punctuated by large openings that place dancers on display. Inside, light warm tones of the wooden interiors will emulate the “light atmosphere" of the scheme's public spaces.

In total, the building will be comprised of a 400-seat concert hall, dance studios, additional space for the university library, rehearsal spaces, classrooms, and administration space. It will provide Germany's largest conservatory and serve as a landmark on the site.

Construction is slated to being in 2018. 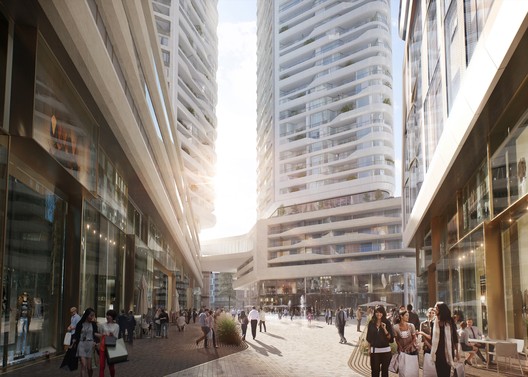