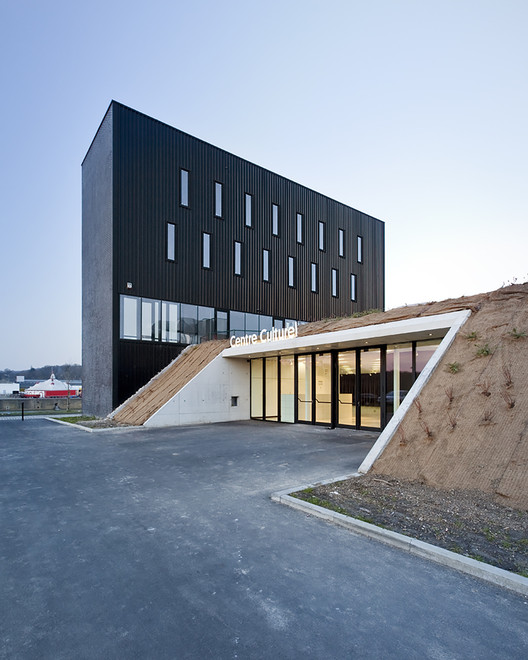 Text description provided by the architects. Andenne's Cultural Center's extension has not been designed as a single appendice filling a lack of space but was rather thought as an opportunity to deal with complex problematic which were restraining the fullfilment of the building. Indeed, its situation in a disparate urban fabric, between supermarket and parking area, didn't give approriate visibility and accessibility to the Center. At the same time, this location reveals a great potential on the landscape scale.

On the banks of the river, the site is perceivable from the main road between Liège and Namur. Label architecture, therefore, choose to have a situated approach capitalising the suburb's condition. By setting a tall volume on the banks, the project initiates visual relationships with its environment, as a signal on the road.

A first low volume, as a base, links the existing performing arts hall to the new building. Hidden below a bank, it offers a new entrance and lobby to the Cultural Center. Above, the new functions – a dance studio, a music classroom, an administrative department and facilities – are combined in a four-floor unit, giving to the Center its architectural identity.

This project has been designed to allow harmonious cohabitation between the different users – the audience of events, the staff's center and Andenne's associative sector. It proceeds to a gradation of privacy which ensures an independence of uses.

The picture on the main facade is part of a public intiative whereby one percent of the budget is devoted to an integrated piece of art. For the Cultural Center, photographer Marc Wendelsky suggested to strengthen the building's visual impact by printing out a large scaled picture on the main facade. Label architecture decided toelaborate a curtain wall with patterned stripes of the picture conveying a kinetic perception of the building from the express road. 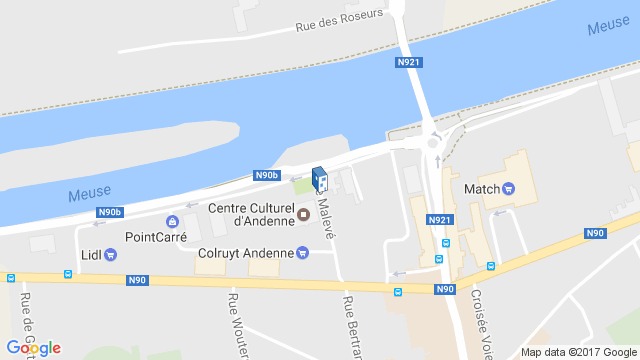