Save
A Bauhaus Façade Study by Laurian Ghinitoiu

While studying for his Masters in Architecture at DIA (Dessau International Architecture), Romanian photographer Laurian Ghinitoiu was inspired to capture Walter Gropius’ Dessau Bauhaus at different times of the day and throughout the four seasons. Taken from the same vantage point over the course of two years (September 2012-July 2014), Ghinitoiu’s photos show the school as snow covers its perfectly-manicured lawn and skateboarders and construction workers come and go.

“The building has been framed in direct relation with the dynamic process of daily life. Lights and shadows, changing during the day and during the year, underline the always-different elements of the silent, but potent building. It almost protrudes out of the scene, imposing its strict lines, its regular rhythm and the functionalism of its geometries. The surroundings play the most important role of the entire photo project: they create the atmosphere, establishing an intimate connection between the architecture and its context." - Francesca Lantieri

View the full photo series after the break. 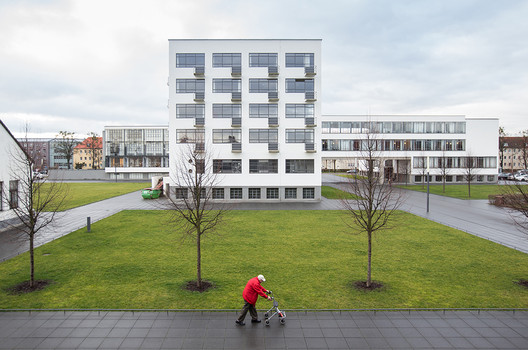