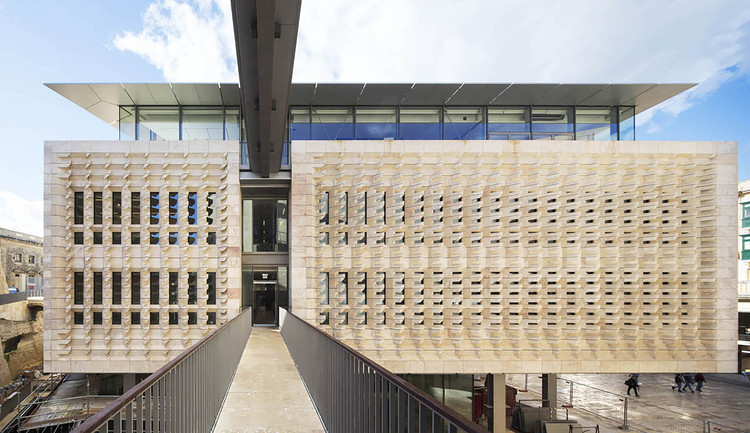 Text description provided by the architects. The ‘City Gate’ project takes in the complete reorganisation of the principal entrance to the Maltese capital of Valletta. The project comprises four parts: the Valletta City Gate and its site immediately outside the city walls, the design for an open-air theatre ‘machine’ within the ruins of the former Royal opera house, the construction of a new Parliament building and the landscaping of the ditch.

The gate, the ditch and the city walls.

A bridge’s width is usually defined in relation to its length. However, the bridge leading across the ditch to the Valletta City Gate had been repeatedly enlarged over time until it had lost both its initial shape and function, becoming more city square than bridge.

With the aim of resolving this rather unsatisfactory transformation, the project focuses on returning the bridge to its 1633 ‘Dingli’s Gate’ dimensions, by demolishing later additions. This allows passers-by to once again have the sensation of crossing a real bridge, and gives them views of the ditch and fortifications.

Valletta’s first city gate, which was probably a single tunnel through the city’s ramparts, has been remodelled through the years, considerably altering the image of a fortified city gate. The most recent modification, completed 50 years ago, involved demolishing 32m of the city wall, distorting the impact of the entrance into the city.

The first objective of the project was therefore to reinstate the ramparts’ original feeling of depth and strength and to reinforce the narrowness of the entrance to the city, while opening up views of Republic Street. The new city gate is a ‘breach’ in the wall only 8m wide. The relationship between the original fortifications and those that have been reconstructed is made clear by the insertion of powerful 60mm-thick steel ‘blades’ that slice through the wall between old and new.

The key element of this redevelopment was opening the gate to the sky. The section of Pope Pius V Street that formerly ran immediately inside the gate at a raised level has been demolished and replaced by two wide, gently sloping flights of steps to each side of the new gate, inspired by the stairs that had framed the gate before the construction of Freedom Square. These stairs link the bastions of St James’s Cavalier and St John’s Cavalier to the lower level Republic Street. This rearrangement frees the fortifications from the arcade that formerly obscured them, allowing them to be seen to their full height and power.

The gate and the ditch will be linked by a stairway and a lift with panoramic views, allowing visitors to descend to the depths of the ditch, now planted with gardens. The car park that formerly occupied the ditch has been replaced by lush, refreshing gardens – an ideal place for a stroll or relaxation, a very pleasant new space to explore. Open-air events can also be organised here against the historical backdrop.

The architecture of the new city gate is very restrained, giving an impression of strength and austerity, stripped of extraneous decoration that would undermine its timeless, honest quality. Its tapered shape and the two great steel poles, each 25m high, are enough to lend this breach in the wall the status of the Valletta City Gate.

The gateway is made of immense blocks of stone, delimited and framed by the tall steel ‘blades’ that are used to highlight the junction of old and new – steel and stone in a dialogue of nature, strength and history. A new ‘hard stone’ quarry on Gozo was opened up specifically to provide stone for this project.

The Parliament, an environmentally responsible building

The parliament building is made up of two massive blocks in stone that are balanced on slender columns to give the building a sense of lightness, the whole respecting the line of the existing street layout. The northernmost block is principally given over to the parliament chamber, while the south block accommodates members of parliament’s offices and the offices of the Prime Minister and Leader of the Opposition.

Creating a porous urban block was at the forefront of the building’s volumetric design. The two blocks are separated by a central courtyard, which also serves as the main entrance to the building. The courtyard is conceived in such a way that views through to St James’s Cavalier from Republic Street are not obscured. The new parliament building is detached from the St James’s Cavalier bastion, highlighting the latter’s structure and historic size as part of the city’s fortifications.

The parliament’s facades are finished in solid stone. This stone has been sculpted as though eroded by the direction of the sun and the views around it, creating a fully functional device that filters solar radiation while allowing natural daylight inside, all the while maintaining views from the building. Each of these blocks of facade has been sculpted by a numerically controlled machine. The result is a stone architecture that is fitting for its historic context but also the product of cutting-edge technology.

Generally it is the density and dynamism of a building’s ground floor that brings it to life, driving a hive of activity in the rest of the building; this is how the ground floor was conceived here, as a flexible cultural space, fully fitted out with a full range of multimedia services.  It is an ideal space for temporary or permanent exhibitions, all fully visible from outside the building, serving as a sort of cultural outpost at the entrance to Valletta.

Certain organisations and parliament-related activities will be housed on the building’s basement level, which opens onto a planted, shaded courtyard. The old Malta railway tunnel is also connected to this lower level garden space, restoring the old underground structure that had been used as a garage, and making it accessible to the public.

Energy use and environmental considerations are principal components in the design of this building. On the one hand, stone is used for the building’s facade to diminish solar heat gain and to allow natural ventilation. Stone is also effective as part of the building’s geothermal heat exchanger, with 40 geothermal boreholes sunk into rock to depths of 140m, 100m below sea-level.

In addition, the roof is covered with 600 sq m of photovoltaic panels – an ambitious energy strategy that allows the building to generate 80% of the energy required to heat it in the winter and 60% of its requirements to cool it in the summer months. 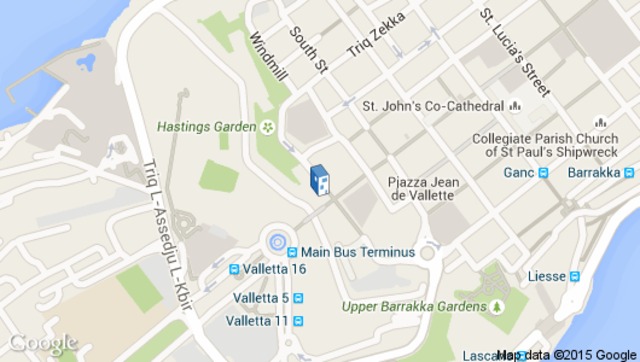 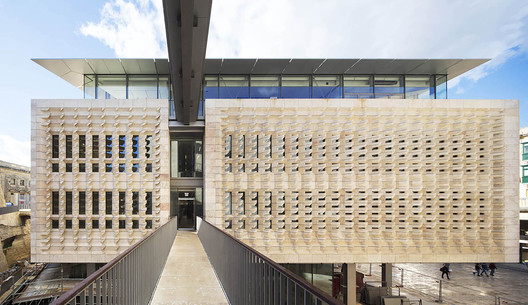