Save
House in Kamisawa / Tato Architects 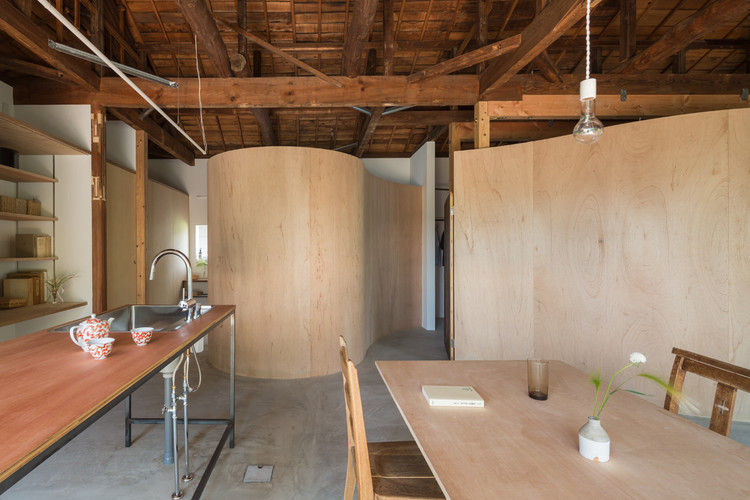 Text description provided by the architects. This building is a reconfiguration of a traditional Japanese wooden house. Its wooden frames were exposed after the removal of unnecessary parts. Only by inserting curved walls into it, spatial functions were created. A similar challenge was experienced in the process of designing “Hut with the Arc Wall”, a public toilet in Shodoshima. There, space was defined by a 9mm steel curved wall, which was built under the wooden roof structure by reference to traditional soy sauce factories in that area. An inspiration from cedar barrels of say source was formalized in the curved wall, which showed an aesthetic of self- supporting structure. The only thing to be regrettable was newly built wooden frames. Ideally, it should have been moved from an old house around that area and rebuilt in a new place, but the required tight schedule didn’t allow us to spend time to look for a suitable existing building. However, since then, we have seen it as a distinctive potential for reconfigurations to divide space with curved walls, which is not related to the outer structure.

The project presented an opportunity to test it, commissioned from a couple who owned a well-preserved one-storey wooden house. The existing house contained many rooms in pure Japanese design, which seemed to be not suitable for a young couple who started a new life there. Unnecessary parts were removed supported structurally, and the curved walls were positioned on the new mortar floor, in which underfloor heating was embedded. Guest room, bathroom, and bed room are surrounded by the curved wall. The rest of the space is devoted to the kitchen, storage, dining and living spaces. A part of the space above the curved wall is used as a loft.

Constructing the walls with 20mm curved plywood was the solution to the limited budget. However, once the construction started, the much less accuracy of those panels didn’t help to realize the desired space. It forced us to change the construction method to frames of 25mm squared rods sandwiched with curved plywood panels. The expected budget overruns were solved by the builder’s effort.

Door and window fittings in the existing house were reused. The interior space of the bathroom was finished with fiber reinforced polycarbonate, on which a double layered polycarbonate ceiling was positioned. The exterior wall was newly cladded with burnt cedar boards, and some windows were replaced by wooden fittings. The simple gesture created a new space, while the history of the house remained.