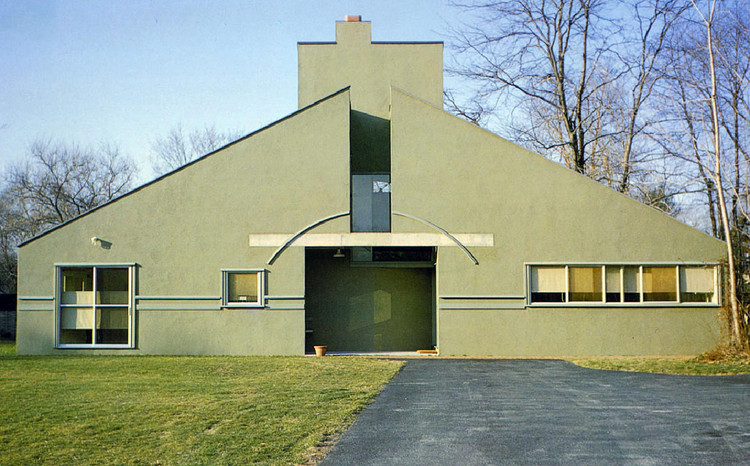 Text description provided by the architects. Most critics usually regard consistency in architecture an important aspect of the design. However in the Vanna Venturi House Robert Venturi took the road less travelled and tested complexity and contradiction in architecture, going against the norm.

Located in Chestnut Hill, Pennsylvania on a flat site isolated by surrounding trees, Venturi designed and built the house for his mother between 1962 and 1964. In testing his beliefts on complexity and contradition (for which he also wrote the book Complexity and Contradiction in Architecture), Venturi went through six fully worked-out versions of the house which slowly became known as the first example of Postmodern architecture.

Approaching the Vanna Venturi house, one can detect the symbolic imagery of shelter through its exterior with its wide symmetrical gable like a classical pediment, which in this case is split, and the chimney poking out in an exaggerated manner from the back.

The main entrance is in the center, creating a sense of symmetry that both is and is not there due to the placement of the windows. These windows are located based on function in the interior. For instance, there is a Modernist ribbon window for the kitchen and square windows serving the bedroom and bathroom on the other side of the front facade.

The interior is centered around the fireplace, the hearth of the home, but still Venturi's design is a "generic" house with unusual twists. The plan contains only five functional rooms, and on the outside it relates to public scale, seeming much larger than it actually is. The "generic" fireplace is actually placed next to a stair that competes with the fireplace to be the core of the house. The fireplace is void, the stair is solid and both vertical elements contort in shape to make room for the other.

Upon entering there is the main living space. Also located on the first floor due to a request from Venturi's mother are the kitchen and the bedroom. The second floor contains another bedroom, storage space, and a terrace. A "nowhere stair" on the second floor also integrates itself into the core space. It rises up at an awkward angle, and its function on one level is completely useless due to its steep slope, while on the other level it serves as a ladder to clean the high window on the second level.

In order to create more contradiction and complexity, Venturi experimented with scale. Inside the house certain elements are "too big," such as the size of the fireplace and the height of the mantel compared to the size of the room.

Doors are wide and low in height, especially in contrast to the grandness of the entrance space. In the rear elevation of the house is an oversized lunette window, which follows the main elements of the exterior that are exaggerated in size. Venturi also minimized circulation space in the design of the house, so that it consisted of large distinct rooms with minimum subdivisions between them.

Venturi referred to the exterior as a layering system. The effect intended was to make the exterior walls both walls and screens. For example, the east glass wall is recessed in order to form a covered yard screened by the back wall. This same idea is used on a smaller scale for the bedroom on the other side of the house.

A manifesto for Postmodern architecture, the Vanna Venturi house is a composition of rectangular, curvilinear, and diagonal elements coming together (or sometimes juxtaposing each other) in a way that inarguably creates complexity and contradiction.