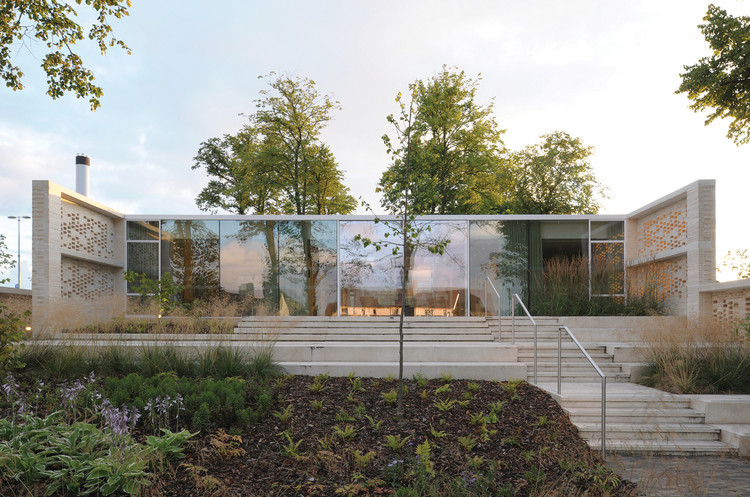 Text description provided by the architects. Generations of Hamiltons, Aitchisons and latterly Wilsons occupied Airdrie House and its estate for over five hundred years. The house and its immediate policies were once defined and protected by a belt of lime tress. Inside this green stockade a cultured and enlightened world played out. Its owners were always closely identified with charitable work within the local community. Ultimately in 1919 Sir John Wilson bequeathed Airdrie house and its lands to the people of Airdrie and it subsequently became a maternity hospital.

In 1964 Airdrie House was demolished to make way for the Monklands District General Hospital. The new hospital is typical of its time, a stratified economic diagram of concrete and glass. While the tree belt survived the demolition of the old house, over time the hospital’s insatiable car parking needs spread, invading the once verdant northern edge, leaving it eroded and vulnerable. The site for the Maggies Cancer Caring Centre is located on one of these Northern car park areas.

In a gesture that attempts to reinstate the idea of a boundary to the hospital estate, the new Maggies embraces two detached stands of mature lime trees with a finely articulated brick wall, once more bringing a sense of continuity and enclosure to this northern edge.

At its heart, the design of the Maggies Centre at Monklands General Hospital is simply a tale of enclosed gardens. A garden is a civilised place, a cultivated place. The word paradise entered the English language from the French paradis, inherited from the Latin paradisus, from Greek parádeisos and ultimately from an ancient Persian root, pairi.daêza. The literal meaning of paradise is a "walled enclosure" from pairi- "around" and -diz "to create a wall".The word garden also has its roots in the idea of making an enclosure. The Old English word geard means a "fenced enclosure, garden, court’’ or a "patch of ground around a house."

Early garden enclosures were simply woven fences. The brick walls of the new Maggies take up these ideas of paradise, enclosure and fence. The brick is a beautiful Danish hand-made brick that at moments in its peregrination around the site opens up to form a delicate perforated lattice. The wall is designed to offer a degree of separation from the hospital grounds but through its pierced nature, its human scale and the haptic quality of its materiality this break is subtle and in places even marginal.

Tom De Paor writing of the sublime church in Bjorkhagen by Sigurd Lewerentz talks of its brick walls thus''the wild bond makes the wall seem like a thick textile, weaved and supplely stretched, renouncing rigidity while enhancing solidity.  The format was vocabulary, the language articulate in its soft birch meadow. Brick is the new ground, harder than clay and denser than soil, but warm as earth.  It creates firm civic order in an empty nondescript setting.'' We too aimed for this sense of groundedness and rich material quality in the making of the garden walls with their irregular handmade brick, patterned coursing and thick mortar joints.

An important and recurring idea for our practice lies embedded in Crichton Castle near Edinburgh whererough ancient walls enclose a paved court. The court is lined with an astonishing Renaissance nailhead moulded stone façade. The exterior gives no clue to the wonders that lie within. The idea of something discovered, something only revealed through crossing a threshold appeals to us.

The garden walls of the new Maggiesconceal a modest low building that gathers together a sequence of domestic scaled spaces, both internal and external.The external courts catch sunlight, creating sheltered sitting out places, sitooteries.

Visitors enter a quiet simple space, an arrival court, defined by brick walls and two lime trees. At once there is a sense of dignity and calm. A linear rill, a spring, animates the space with the sound of running water, a refreshing source and an intimation of beginnings. A simple piece of text, allt beag, little burn,has been cast into the rill by poet Thomas A Clark heightening the sense of tranquility and reflection. A simple bench offers the opportunity of a pause.

A simple steel framed structure disciplines the plan, defining and creating an intimate scale. The plan configuration and the detailed design of the timber partitions allows more private spaces and rooms to either open up to the central sequence of public rooms or close down to create confidential moments. The steel frame is in-filled in timber. The overall material palette is muted and soft, blonde Finnish birch to walls, limed oak to floors and white stained pine to ceilings.

The journey through the building emerges out into a large walled garden that slopes down to the east; generous terraces give way to a richly planted garden that in time will create its own pockets of space for quiet reflection or conversation.

Maggies centres are always graced by fine art. While the carefully selected furnishings add comfort, the art adds culture to the bare architecture armature. In designing the building we are have always been immersed in the ideas of our artist friends. Three artists particularly have influenced the design of Maggie’s Lanarkshire. They have not only contributed works to the new building they have influenced the design of the building at a fundamental level. The works are autonomous from the final building. We, however, see in them the fundamental motives behind our design.

Alan Johnston, our closest collaborator over many years, has gifted a piece to the library, a major drawing in gesso, charcoal and beeswax on raw linen. Alan’s work always sits in relation to architectural space, the composition a response to proportion and line, solid and void. The white gesso lines describe a kind of framing suggestive of the garden walls or the steel frame while the black charcoal and the raw linen perhaps speak of the building mass in relation to the garden void. The materials that Alan works with are fundamental in their nature, they have an elemental quality.

Steven Aalders is a Dutch artist based in Amsterdam. His work can be seen to make a direct line back to Mondrian. Steven’s work is at first glance extremely rigorous, meticulous but, like Alan’s, on close inspection the hand of the artist is revealed in the personality of the marks made on the canvas. Again Steven has gifted a major work, an oil painting, Ultima Thule, for the entrance porch. The three bands within the painting can be seen to relate to the three zones within the building plan. The white panels convey as in Alan's the discipline of the steel frame and the colour pieces signify the courtyards that bring colour, movement and light into the interior.

Thomas A Clark is a poet. His work is reflective, quiet, dignified. He is concerned with being in a landscape. One of his best known works In Praise of Walking was influential from the beginning, the very idea of a garden as a place apart, an enlightened space that would welcome and lend support to all. In the end only one part of Tom’s proposal was realized in the final building. We have included the full proposal for Maggies by Thomas A Clark. 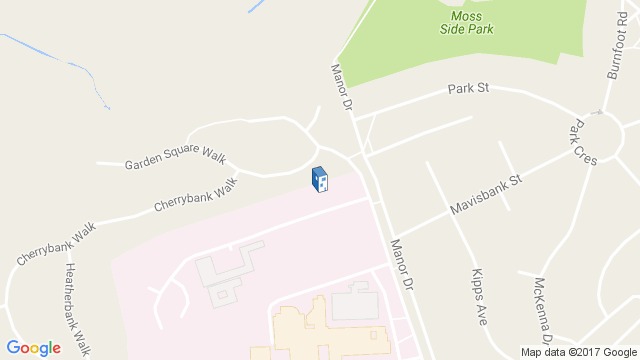