Where the Panamerican Route passes along Rancagua, Chile, it does so in a seemingly interminable straight line, intersecting with the H-35 toward the Pacific and the Andes. At this junction between two of Rancagua's arterial roads German practice raumspielkunst has envisioned "The Cloud," a new form of self-sufficient gas station.

Responding to the nature of its site as a meeting point between the industrial and the touristic, the environmentally efficient gas station would cater for thousands of commuters each day.

raumspielkunst's gas station of the future aspires to sustainability, availing of solar and wind energy to generate its own power. Solar panels are embedded in the eponymous cloud-like roof, whose surface is comprised of a white, translucent textile. Slender steel pillars up to 12-meter in height support the roof structure, and themselves contain wind turbines for electricity production. Rainwater collected in the dips and troughs formed by the textile surface passes through the pillars and is used to meet the water requirements of the facilities below.

At ground level the station assumes an orthogonal L-shaped plan, into which several programs are arranged. Though predominantly a gas station, The Cloud is projected as a hub for commuters and travelers, also featuring a restaurant, bakery, pharmacy, wine shop, and supermarket. 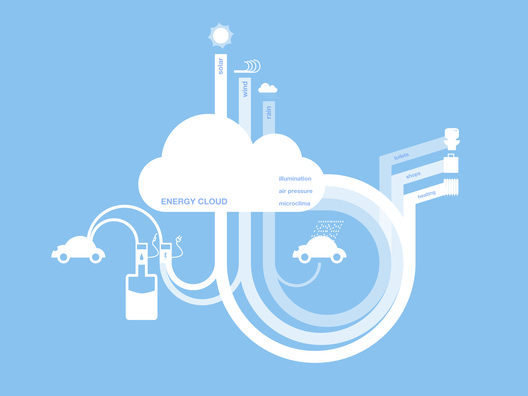