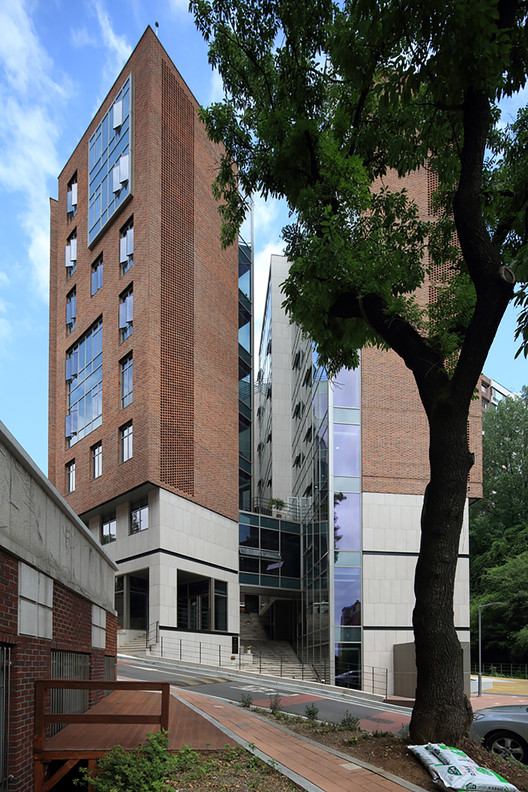 Text description provided by the architects. The campus of the Presbyterian University is located in the foothills of Acha-san overlooking the Han River. Despite its location at the urban center, the surrounding environment gives the campus a ‘retreat’ (피정, 避靜) atmosphere due to the wooded forest. In consideration of the campus’ size, the high proportion of the dormitory occupied could be considered as one of the university’s characteristics.

The new seminary hall was placed in replacement of the demolished previous seminary hall. The spaces needed in the campus, such as the professors’ laboratory and club rooms, were combined within the space program and placed in this seminary hall. The site of the newly planned building didn't have the suitable characteristics of a dormitory, such as building height limit, floor plan composition, natural light and distance between buildings. However, due to the narrow topographical conditions the new seminary needed to be bigger in height.

The design started from the construction of the smallest unit of the seminary: the dormitory. Seminary hall of the Presbyterian University, a religious institution, was founded from its differences with the recently built university seminary halls. The trend of the recent seminary halls focuses on convenience and privacy, accommodates small groups of people in their dormitory units and has separate bathrooms.

On the other hand, the purpose of Presbyterian University seminary is not to accommodate larger groups relative to its size but to educate users for a group life among other users, which is thoroughly reflected in the composition of the public shower rooms, toilets and other public spaces. The key of this design challenge was to design a pleasant seminary where the multi-room units were distributed among the spaces available, without altering the required space. Moreover, what was hoped from the university was to build a residence hall with spiritual fullness.

The composition of the four-man flat units was carried out by compromising the constrained elements such as ventilation, lighting, privacy, health and view of the building site. The basic scheme of the plan started by placing the corridors around the courtyards(중정, 中庭). The courtyards' curtain wall windows solved issues of natural ventilation and lighting. Also, by facing the resident rooms’ corridors to the courtyard, the spaces within could keep a pleasant environment.

The outdoor stairs in the courtyard were connected to the circulation flow in the rear of the building. From the outside, people can look students walking or resting in the stairs. Rooms that students use frequently such as, club room and fitness center were located in the basement due to the building height restrictions, but doorways to the ground floor and window were installed all around for sunlight and circulation.

The intention was to integrate the agreement with the future and sympathy for the past. By blending with the surrounding campus buildings, another message was intended to be delivered. The traditional finishing brick covered the entire exterior and by adding details such as projected parts and retreated curtain wall windows, two meanings were delivered: the coexistence of the past and the future, and the unity of diversity. Unlike the exterior finish, the finishing materials of the courtyards were given a livelier image by adding curtain wall windows, exposing the interior corridor to the outside. Furthermore, this particular space was intended to be a medium for the users, in order to give a feeling of community connection between the outside and the inside.

The granite finishing in the lower levels serves to reduce weight of a stable building, in comparison to the ground slope. Campus-facing residents’ room with balconies, used as laundry drying and multi-purpose space, consisted of an interior double-walled structure in consideration with the aesthetics. In the opposite façade, the balconies were projected to enable views of the forests and the river. The end of the mass and part of the elevation are viewed from the campus entrance, leaving an impression to the students. 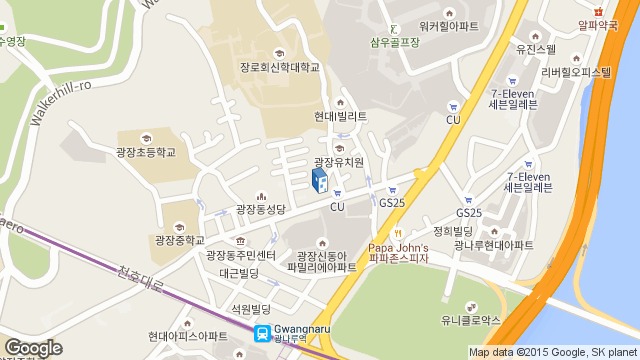 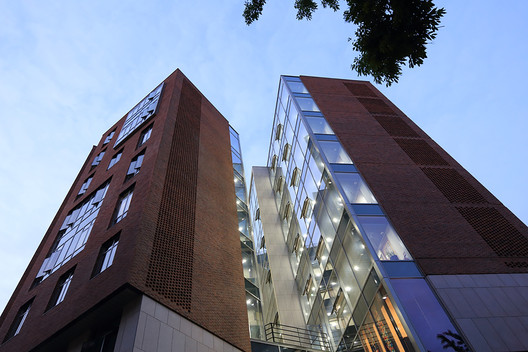