Save
Playing with Balance and the Balance of Play: Hello Wood's 2014 Camp
Share
Or
Copy

A shortened version of this article by ArchDaily's Managing Editor Rory Stott appears in HW 1-5, a book by the organizers of Hello Wood about the camp's first five years.

Arriving at Budapest’s international airport on a warm Saturday in July, I confess to being unprepared for my week ahead at Hello Wood 2014. Hungary was the third country and Budapest the fourth city I had been in in 72 hours, and thanks to this (uncharacteristically) chaotic week, I hadn’t had the chance to research anything about the camp. All I knew was what could be learned from the photos of the 2013 camp which I had published almost a year earlier: that is, that the camp is held in an idyllic rural setting, presumably a significant distance from Budapest; and that the quality of work seems unusually high for a week-long architecture workshop, presumably indicating a serious, focused atmosphere at the camp.

The first of these assumptions was absolutely right. But the second could hardly be more wrong. In fact the atmosphere at the camp was so far from being serious that by Tuesday, Gábor Betegh - a friend of the organizers and coincidentally Cambridge University’s new Laurence Professor of Ancient Philosophy - told me how fascinating it was to compare the “centripetal madness” of the philosophers he knows to the “very centrifugal madness” of the architects at the camp. This remark was made in response to one of the team leaders screeching like a monkey from the top of his team’s half-completed tower. 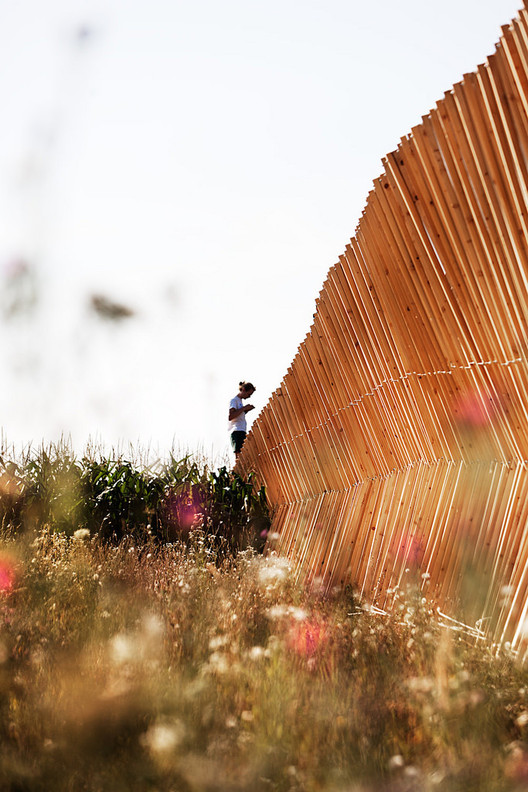 The “anything goes” atmosphere of the camp wasn’t only visible in the eccentric personalities of the participants either. Throughout the week the organizers had invested considerable effort in creating a full calendar of social events, with bands and a temporary bar. In this vacation-like atmosphere, how is it possible to produce such quality installations in just 8 days?

The key lies in two factors: firstly, in the natural propensity of architects to simply be busy and make things; secondly in the particular style of construction employed by most teams. The phrase used by some tutors was “improvised architecture” - in other words, they would start building something before they really knew what the final outcome would be.

For some projects, this improvisation was by design. For example in “Shower Power,” a project led by Suzana Milinovic and Rufus van den Ban, the team built an elevated water reservoir first, then designed showers and baths to catch the reservoir’s inevitable leaks - something which became a particular challenge when it turned out all the leaks came from the reservoir’s edges.

Other projects were improvised due to a freedom of spirit based upon the belief that, at least in this context, improvisation is simply better than meticulous planning. Perhaps the best example of this was Oliver Sales and Bence Pap’s “Spikefort” where, having watched the team agree on the height of the tower, I came back later to find its size almost doubled. Presumably at some point in the construction it just felt right to go higher, and (Freudian jokes aside) I think by the end of the week most people in the camp agreed that the extra height added a confidence to the design which was crucial to its success.

Of course for architecture students, who often spend months painstakingly designing a project that they know will never be built, this approach is incredibly liberating. But it also adds an educational dimension to the experience which students rarely get elsewhere. By leaving the design open to such radical adjustments during construction, the resulting projects become a negotiation with the building material, with students learning to appreciate the particular capabilities of the wood they are using.

This learning outcome does not happen by accident. Hello Wood “complements the traditional university systems because when you're studying architecture the way you learn is really abstract,” explains Péter Pozsár, Co-Founder of Hello Wood. “You're making drawings, you're working with the computer… If you would like to put up exactly what you've got on the computer screen, at some point you're going to realize ‘oh shoot, somehow it's different.’ This camp is full of these kinds of experiments.”

Reflecting this spirit, many projects conceptually privileged the process of construction over and above the completed result. One example of this is Salvador Gilabert Sanz’s “Labyrinth,” where the goal to construct without the help of screws, nails or other fixings was as important as the form of the project overall. Another example is Frank Havermans’ “Barny,” a project inspired by the communal activity of barn-raising, about which Havermans told me “I think doing things with your bare hands teaches you a lot about the basics of mechanics… by doing it and feeling it they can learn, because that's something you cannot get rid of; you'll never get rid of gravity.”

It is clear that with a different atmosphere - one that stresses control over a project and precise outcomes, for example - something of what makes Hello Wood a success would be lost. In a sense their most recent camp’s theme, Play With Balance, gives us the perfect opportunity to review what they have achieved, as many of their most successful attributes rely on a delicate balance between serious aims and the freedom, charisma and light-heartedness required to make these goals a reality.

Take for example the challenge of finding the right balance between scale and intimacy: “We have 160 people here,” Pozsár tells me. “We had the camp with more than 200 people three years ago, and we realized that it wasn’t as good because we lost this personal layer. We're never going to do that again.”

Or take the balance between Hungarian students and the foreign students who in 2014 represented around 30 countries: “It's just really refreshing to see what's going on elsewhere - especially to do this in Hungary is exciting because we're kind of outside the places where everything is happening,” explains Orsi Janota, Hello Wood’s Project Manager.

But while these internal logistics are an important element of Hello Wood’s immediate success as a summer camp, their long-term success - both as a camp and as an architecture practice throughout the rest of the year - depends on how they balance these considerations with the wider context and aims of the organization.

In Hungary, the effects of the 2008 financial crisis are still plain to see. A significant number of stores lie empty in Budapest, where on my Tuesday daytrip to the city my guide Kristóf Pataricza seemed to take a perverse pleasure in pointing out the “typically Hungarian” elements of the cityscape: usually things that are either poorly organized, incomplete or slowly decaying. Amid this backdrop, large scale architectural commissions are few and far between.

In this context, small-scale works become a necessity for many architects who wish to remain in the profession. “We have less and less traditional architecture work,” comments Janota. “We still do some houses, but about 80% of our work in the last year and a half or two years was installations.”

“Since the financial crisis, what we've seen is the surviving mode of practice is really coming down, crashing down,” confirms Samu Szemerey, a Budapest-based architect, curator and researcher who founded the KÉK-Hungarian Centre for Contemporary Architecture. “In the last five, six, ten years, very few have had the chance to do architecture in the way that you get educated to do it… a lot of people are experimenting with ways to achieve this kind of practice, which means many things: it means business models, with many small groups working in very flexible networks, and it also means implementing their knowledge in very different areas, from publications to social work.”

Hello Wood has therefore become a key player in this new generation of Hungarian creative enterprises. The office was even included in a campaign by the Budapest government encouraging people to make creative use of the city’s empty shops. The campaign highlighted one of the few bright spots in Hungary’s economy, Budapest’s nascent start-up culture (though both Pozsár and Janota are quick to dismiss the “start-up” label).

Despite these positive signs, the Hello Wood program still faces an uphill battle in a country where “brain drain” is the norm - a result of the country’s financial situation but also a nationalist political turn, which seems to have hit Hungary as strongly if not more so than many European countries and is seen as a regressive step by the young and generally progressive creatives in question.

“In Hungary there is this very strong negativity and a dilemma, especially among my generation, about whether to leave or not,” says Janota. “Some people say, ‘screw it, let's just leave and go somewhere where you don't have to fight for everything, you're paid properly, and your work is respected’; and then there's some people who say ‘no, let's stay here and actually do something because the only way anything's ever going to change is if we just stay.’”

“I personally really enjoy being a part of a project that's not going away, we're focusing on Hungary and trying to initiate things that may be little steps, but they can strengthen our belief that it's good to be here.”

So can the program at Hello Wood also strengthen others' belief that “it’s good to be here”?

Speaking to a group of six Hungarian students, many of whom were completing their third straight year at the camp, this question was met with lowered eyes and some non-committal mutterings: “I don’t know, I never thought about it”; “it’s a little more complicated in Hungary”. Until Dorottya Czakó quietly, thoughtfully spoke up:

"For us, every summer we come as a group of friends, and I think it can change things. We will be much better as a group, so maybe we will stay together as an office later, and change things in Hungary if we can. Of course it's hard, but it's good for us that we can practice this group thing here."

"It helps a lot that it's international, so that artists from Budapest can see what's happening outside the country,” adds Hanna Gelesz. “And maybe they can adapt from it and be more open-minded, not so provincial - because Hungary is really provincial - and culturally step onto the level of this international movement and way of thinking.”

The Hello Wood camp is of course just one small answer to all of these problems, from the relatively approachable issues of architecture education to large, inscrutable macroeconomic processes. But if there’s one lesson to be taken from this camp’s global reputation, it’s that small interventions can have a much larger impact than you’d expect. The fact that this is best achieved through sweaty days, nights at an improvised underground bar and a liberal dash of 8 a.m. animal impersonations - that’s just part of what makes it special.

You can find out more about the book HW 1-5 at Hello Wood's website.