GRAFT Architects has released the final designs for the APASSIONATA adventure park. The competition-winning proposal aims to become a hub for leisure and entertainment in Munich, Germany, featuring a year-round venue for relaxation, discovery, and interaction with horses.

Check out the design and watch a virtual tour of the park, after the break. 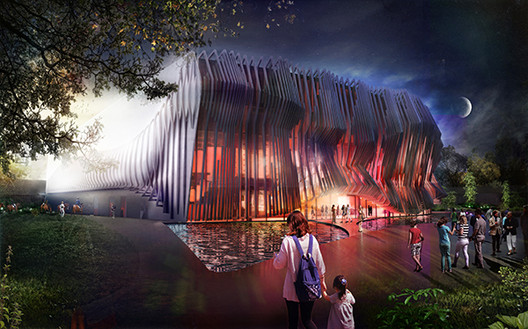 Occupying roughly 12 acres, the park will host 12 themed pavilions grounded by a central show palace. The pavilions provide an interactive atmosphere, housing such activities as a 360 degree cinematic theater, horse museum, foal station, and petting zoo. Although they are distributed throughout the park and differ in function, the pavilions maintain a cohesive relationship through their shared materiality - wood.

The show palace connects the built environment surrounding the park with the natural landscape. Perched in the center of the park, its fluid form pays homage to the motion of running horses, creating a dynamic façade that complements nature with its organic shape. Within its walls, 1,700 visitors can experience a horse show on the 40-meter stage and everyone enjoys a close-up view due to the space’s wide layout.

The show palace is slated to open early next year, while commissioning for the rest of the park is expected by mid-2016.