Dr. Vikramāditya Prakāsh is a professor at the University of Washington and the founder of the Chandigarh Urban Lab. In the following article he discusses the past, present and future of Le Corbusier's vision for Chandigarh, explaining the reasons behind the petition he started against a new residential development to the North of the city.

Le Corbusier’s famous Capitol Complex in Chandigarh, India is about to be ruined by the construction of a gaggle of towers to its immediate north. The new project, called ‘TATA Camelot’, is being developed by TATA Housing, the real estate wing of TATA Group, a major multinational and one of India's largest industrial companies. TATA Camelot’s 27 proposed towers, each between 13 and 36 storys tall, will not only destroy the architectural and urban design integrity of the Capitol, they will also disrupt the fragile Himalayan ecology of the area. In the contest between development and preservation, it is the larger public good and the long term perspective of the ecological that must be prioritized. 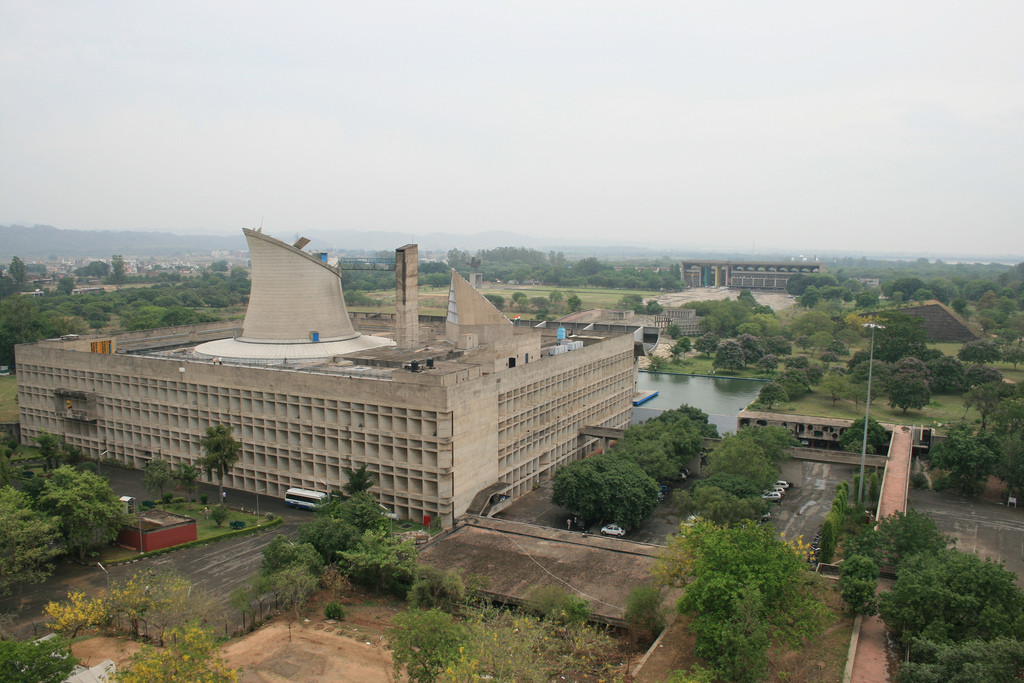 PAST: The Chandigarh Vision

The site of Chandigarh was selected by aerial reconnaissance. Late in 1948, soon after India’s Independence from colonial rule, two Indian Civil Services officers named P.N. Thapar and P.L. Varma flew from Delhi on an old WWII airforce transport aircraft, to survey several possible sites for the new capital city. They picked the site where the city is today because it was a gently sloping plain, nestled into very foothills of the Himalayas. The mountains, they reasoned, would assure the city a spectacular backdrop, and also a perfect slope for natural drainage.

Le Corbusier, after he was eventually selected for the project in 1950, immediately responded strongly to the site conditions. “We are in a plain,” he wrote, “the chain of the Himalayas locks the landscape magnificently to the North. The smallest building appears tall and commanding.” [1] He rapidly set to work drafting a layout for the new city, carefully delineating it between two rivers – the Patiala ki Rao and the Sukhna Choe – that drained from the hills into the plain. A third rivulet, the smallest, Le Corbusier designated as the armature of the prime ecological zone of the city - its “green belt” in modernist lingo - that was later re-christened as the “Leisure Valley”. Unsurprisingly, Le Corbusier located the Capitol Complex that would hold the magnificent buildings of state which he was to design personally, at the very northern edge of the site, carefully articulated into an exclusive protected zone with the mountains on one side and the rest of the city on the other. Within this narrow strip of land, Le Corbusier located the temenos of the Capitol – defined by two squares of 800 meters each.

Le Corbusier wanted to protect the remaining land between the Capitol and mountains as an agro-rural landscape. “The Capitol was placed at the top of the town”, Le Corbusier wrote in a special 1961 issue of the Indian journal Marg (which at the time was coincidentally sponsored by the TATA Group):

…so as to take good advantage of the presence of the mountains, the hills and the agricultural life (villages, sugar-cane fields, wheat fields, colza fields, etc., ploughings and pastures peasants at work, cartings, cows, oxen and bulls), this millennial activity touching the Capitol, separated by one single pit of 4 meters width preventing confusion, but connecting modern times to the magistral bucolic symphony. [2]

Modern times, with the bucolic symphony – mountains, hills and agricultural life; this was the modernist vision of the Capitol, a very distant avatar of the Radiant City from Le Corbusier’s past, an incipient manifestation of the principles of ecological urbanism as we are beginning to recognize it today.

And so unsurprisingly, when an army cantonment was proposed in 1960 on the hills, Le Corbusier fought it tooth and nail, eventually moving Jawaharlal Nehru, the Prime Minister of India, to prevent its construction.

Chandigarh today, 50 years after its inception, is not only fully grown, it is one of the fastest growing cities of India. As a result of its success, real estate values in this erstwhile modernist utopia easily rival those of even a wealthy US metropolis. As a consequence, Chandigarh’s growth is regulated not by a reinterpreted modernist vision but by the exigencies of real-estate investment.

Since ‘old’ Chandigarh has adopted a largely preservationist stance, most of this growth is occurring in the peripheries of the city. Most of these peripheral territories, however, do not come under the jurisdiction of Chandigarh Administration, but that of the State of Punjab, which is understandably focused on maximizing their development potential. GMADA, the state agency responsible for directing this growth, has published extensive development plans (prepared by Jurong Consultants of Singapore) designed to build out all the land that is available around Chandigarh (see here for more information). Actual development in this area is still in its early stages.

GMADA’s plans focus on the South and South-East of Chandigarh, which are the natural directions of growth for the city because that is where all the large parcels of land are currently available. They have published seven master-plans, all of which rely on significant infrastructural investments to catalyze development.

Eschewing these plans, TATA Sons has chosen to develop their mega-project in the precious narrow strip of land between the Capitol Complex and the mountains that is not even earmarked as a major development priority by GMADA. While the real-estate values of this land are obviously very high, it is presumably not a major target of the official development plans because of the difficulty of providing access to it and because it falls within the general protective ambit of the Capitol. However, because of a re-drawing of state boundaries (driven by political exigencies) in 1966, a small portion of the land next to Capitol Complex fell out of the legal jurisdiction of Chandigarh. TATA Sons is using this loophole to drive this project.

Intended to be developed in two phases, TATA Camelot is a gated residential community consisting of 27 towers, varying in height from 13 storys to 36 storys each. While the design of the towers themselves is itself of limited aesthetic quality, it is of course the siting of the project that is the key contention. The project is not only going to mar the precise visual framing the Capitol buildings, it also runs counter to the larger conceptual vision of the city and its relationship to the mountains. While the Chandigarh plan gently nestled up to the mountains and steered clear of the rivers, TATA Camelot butts right up against the mountains (which is also a national reserved forest), and occupies land that is the former river bed and flood plain of Kansali Rao river, one of the two tributaries of the Sukhna Choe river.

The history of Kansali Rao is important to understand. An important part of the original plan of the Capitol and the Lake, the Kansali Rao was diverted into a deep and narrow man-made canal in1971 to try and mitigate the amount of silt it was carrying into Sukhna Lake. This diversion, which ‘freed’ up this land on which TATA Camelot is proposed, has only succeeded in increasing the silt being carried into the Lake because water flows much faster through the canal than it did along its original meandering path. The silting of the Lake is a major obsession in the city today and appears to be a losing battle.

The diversion of the Kansali Rao vouchsafes the ecological case that it is better to learn to inhabit our earth in a manner that is in sync with the logics of nature rather than try to engineer them away. The original master-plan of Chandigarh recognized this value and whether it was intuitive or self-cognizant, the visual transparency that Le Corbusier insisted on between the Capitol and the mountains stands in witness to this fundamental truth of life. The long term view of ecology insists, I would argue, on the importance of protecting the original path of the Kansali Rao against development, or else it will come to haunt us as other buried waterways in other cities of the world have come to haunt them.

It seems to me that thinking of preservation as the process of managing change, rather than just fossilizing the past, is a more productive framework for rethinking Chandigarh’s modernist heritage. Modernism itself, after all, was a great rethinking of the past, of the value of history to the present and future. Preservation as managing change suggests that long shadow of history must not be a threat to the possibilities of the future, but a guiding light. Built as a modernist, utopian state enterprise, an administrative city with ecological master planning, Chandigarh today is a real-estate mecca. In other words, it is the non-privatized larger civic and ecological values that are inscribed in the Chandigarh vision that have fundamentally generated its real-estate value. Good design works, and ultimately adds value to the life of the average citizen, beyond a privileged set of stakeholders.

By contrast, TATA Camelot is focused singularly on profit maximization, exploiting an unintended loophole in the law. Not only is it destructive to the past, it doesn’t offer or participate in alternative urban or ecological vision. In the backyard of Chandigarh, this is incorrigible. The TATAs, and the master-planners of Chandigarh’s future, must be held to a higher standard.

TATA Camelot is currently being sued by a citizen’s advocacy group in the courts, and a decision is pending.

You can sign Dr. Vikramāditya Prakāsh's petition to “SAVE Le Corbusier's Capitol Complex in Chandigarh” here.