In a development that shocked many in the architecture world, on the 19th of January Architecture for Humanity - arguably the world’s leading architectural charity - was reported to have gone bankrupt, closing their San Francisco headquarters. By itself, this news was attention-grabbing enough, but in the aftermath two interesting things happened: firstly, many started to wonder what would become of the organization’s many local chapters in the US and beyond; secondly, some writers began to uncover small but long-standing disagreements about how the central organization had courted publicity - managing director of Architecture for Humanity’s New York chapter Rachel Starobinsky, for example, was quoted by FastCo Design saying that “visibility always went to the disaster relief projects that headquarters was working on” and that “the chapters were not really highlighted or valued as much as they could have been.” All of a sudden many people - this writer included - were talking about the importance of both creating strong networks and of sharing information to the creation of a strong humanitarian design outfit.

None of these ideas, though, would have been new to the members of Architecture Sans Frontières. Though it was founded a full two decades earlier than Architecture for Humanity, beginning in France in 1979, ASF has never really shared the public profile of some of its contemporaries. There are reasons for this - a lack of desire to actively court attention chief among them - but none of them have anything to do with ASF’s ability to do good in the world.

“I would say that it's not about us going and building things,” Rubbina Karruna, the current Chair of Architecture Sans Frontières UK, explains to me. Instead the focus of ASF-UK has been on creating networks, both between themselves and the other branches that make up ASF-International, but also with the local governmental departments, NGOs and smaller humanitarian charities that can benefit from their help and expertise.

“I know it's a term that's used a lot, and especially in international development it can become quite meaningless - but I think capacity development is critical.” Karruna would know about the former point: trained in Economic and Development Planning, she introduces herself as “kind of the non-architect in ASF-UK” adding that in her opinion “what is so great is that it's not just for architects - it's a broad multidisciplinary group of people.”

Dr Beatrice De Carli, another member of ASF-UK who serves on the board of ASF-International, backs her up on this point: “for us, even being called ‘Architecture Sans Frontières’ and not ‘Architects Sans Frontières’ is important because we have always discussed how the built environment in general, it's not about one profession. Of course as architects and designers we have one strong take on the built environment and a certain type of expertise, but that's not the only type of agency that modifies how cities are made and how people live in space. To make cities more equitable somehow we need to be able to engage with all these different knowledges.”

One of the major initiatives undertaken by ASF has been to not just engage with this varied knowledge base, but to bring it to architects in a digestible way. Challenging Practice, an educational course devised through a collaboration of ASF members from Spain, France, Italy, Sweden and the UK, aims to introduce interested architects and built environment professionals to the fundamentals of working within disadvantaged communities.

“Challenging Practice actually started as our own internal reflection from different organizations within the ASF network,” explains De Carli, who helped to develop the course as part of ASF-Italia before moving to the UK to teach at the University of Sheffield. “We had all somehow trained our own way into the organization - often, ASF volunteers do not have a formal education in community and international development issues prior to approaching the organisation. It started as a discussion among the different chapters about the fact that we wanted to be able to train ourselves and also to train the many volunteers and students, who come to our organization wanting to contribute somehow.”

The route through Challenging Practice develops from the first stage, a free online course which educates participants on topics such as different forms of discrimination and how they might manifest themselves in the built environment, different theoretical frameworks, and the way they might help to understand deprivation, poverty or inequality. From this point, learners can participate in a live seminar which “builds a bridge between theory and practice and creates a protected environment for participants to start testing what some of these ideas might mean in a real context.” In the third stage, participants are able to put what they have learned into action, either through one of ASF’s field workshops, or by working an internship with ASF or one of its many partner organizations.

“The idea is that the course doesn't touch on any of the core issues that normally form part of architecture or design education, as we start from the assumption that this is the background of many of the people who approach us,” De Carli says. Fundamental to the idea of Challenging Practice, she adds, is "looking at the gaps in architectural education and recognizing that good intentions don't always result in good practice” - at least, not without adequate knowledge.

But the idea that Challenging Practice is somehow outside the realms of architectural education is beginning to change. Last year in the UK, the course was acknowledged by the RIBA and is now accredited as a recognized form of continuing professional development (CPD) study - and with a total of around 1,300 participants from 70 countries since the course was launched, it’s popular too.

Challenging Practice also feeds into ASF-UK’s other major programs. Change by Design and Resilience by Design focus on addressing socio-spatial and environmental inequalities respectively, and both primarily involve connecting with local communities all over the world - in developed countries as well as developing ones - to help residents, local governments and NGOs address the underlying issues that are causing problems in the built environment. These programs are enacted through a variety of methods, from advocacy to live projects, but the main component of both is regular field workshops - the very same workshops that Challenging Practice participants attend in the third stage of learning.

While ASF-UK, as well as the other member organizations worldwide, do occasionally engage in building projects themselves, this is not the focus of the organization. “ASF-UK has always been about building knowledge and exchanging knowledge with local organizations and it has its own trajectory,” explains De Carli, but increasingly other member organizations are following this example. “This is an ongoing conversation and an important shift in paradigms for ASF-International as a whole, to start thinking that it's not about going to places and building things, but - in our home countries as well as elsewhere - it's about sharing the knowledge that we can generate by working with local communities in different places.”

If the power of ASF’s approach is in sharing knowledge, networks are the means by which they implement that power, and ASF itself is perhaps the most impressive of all these networks. Because while Architecture for Humanity left behind a network formed under the umbrella of a leading organization, ASF is an organization born from the network itself.

“There is no such thing as the headquarters of ASF-International.” Says De Carli. “But there is a board which is always formed by representatives of different chapters, and has the role of creating links between them. In a way ‘chapter’ is not the right word to use, in the sense that ASF-International was created after many of the local organizations; there were all of these local ASFs that knew of each other and at some point they decided to come together to start exchanging ideas and practices, and to collaborate.”

ASF is now also focusing on helping new branches to start up in various regions of the world: the organization has almost 30 member organizations including outfits in India, Nepal, one in Colombia and more soon to come in Latin America, and organizations in Congo and Mali. Also this year ASF’s General Assembly, where all the organizations come together to hold seminars and share their approaches with the other members, will be held in Nepal - the first time the GA will be held outside of Europe.

“I think this is very much in tune with the way we are trying to reach a global impact,” Concludes De Carli. “To support networks of architects and built environment practitioners who are interested in making a strong contribution locally, and then we are trying to grow from that local scale.”

As architects, it is almost natural for us to measure success in terms of buildings. But at some point, we should take the time to admire the invisible things which nonetheless required careful design and construction. Architecture Sans Frontières - the organization, its programs and its approach - are a prime example of this. 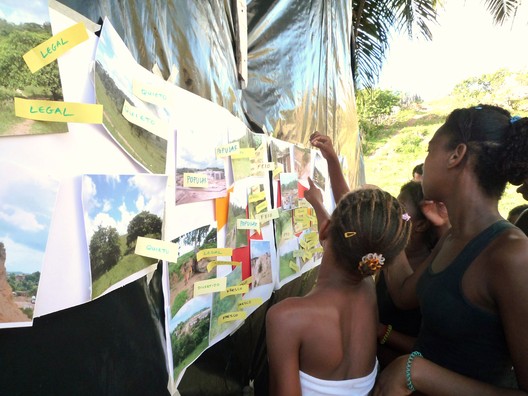