Save
Moscow's High Rise Bohemia: The International Business District With No Business
Share
Or
Copy

The Moscow International Business Center (Also known as Moskva-City) was meant to be Russia’s ticket into the Western world. First conceived in 1992, the district at the edge of Moscow’s city center is intended to contain up to 300,000 inhabitants, employees and visitors at any given moment and, when completed, will house over 4 million square meters of prime retail, hotel and office space to create what the Russian government desired most from this project: an enormous financial district that could dwarf London’s Canary Wharf and challenge Manhattan. Twenty three years later though, Moscow-based real estate company Blackwood estimates that as much as 45% of this new space is entirely vacant and rents have plummeted far below the average for the rest of Moscow. The only press Moskva-City is attracting is for tenants like the High Level Hostel, a hostel catering to backpackers and other asset-poor tourists on the 43rd floor of the Imperia Tower, with prices starting at $25.50 for a bed in a six-person room. This is not the glittering world of western high finance that was envisioned back in the post-Soviet 90s; but what has it become instead? 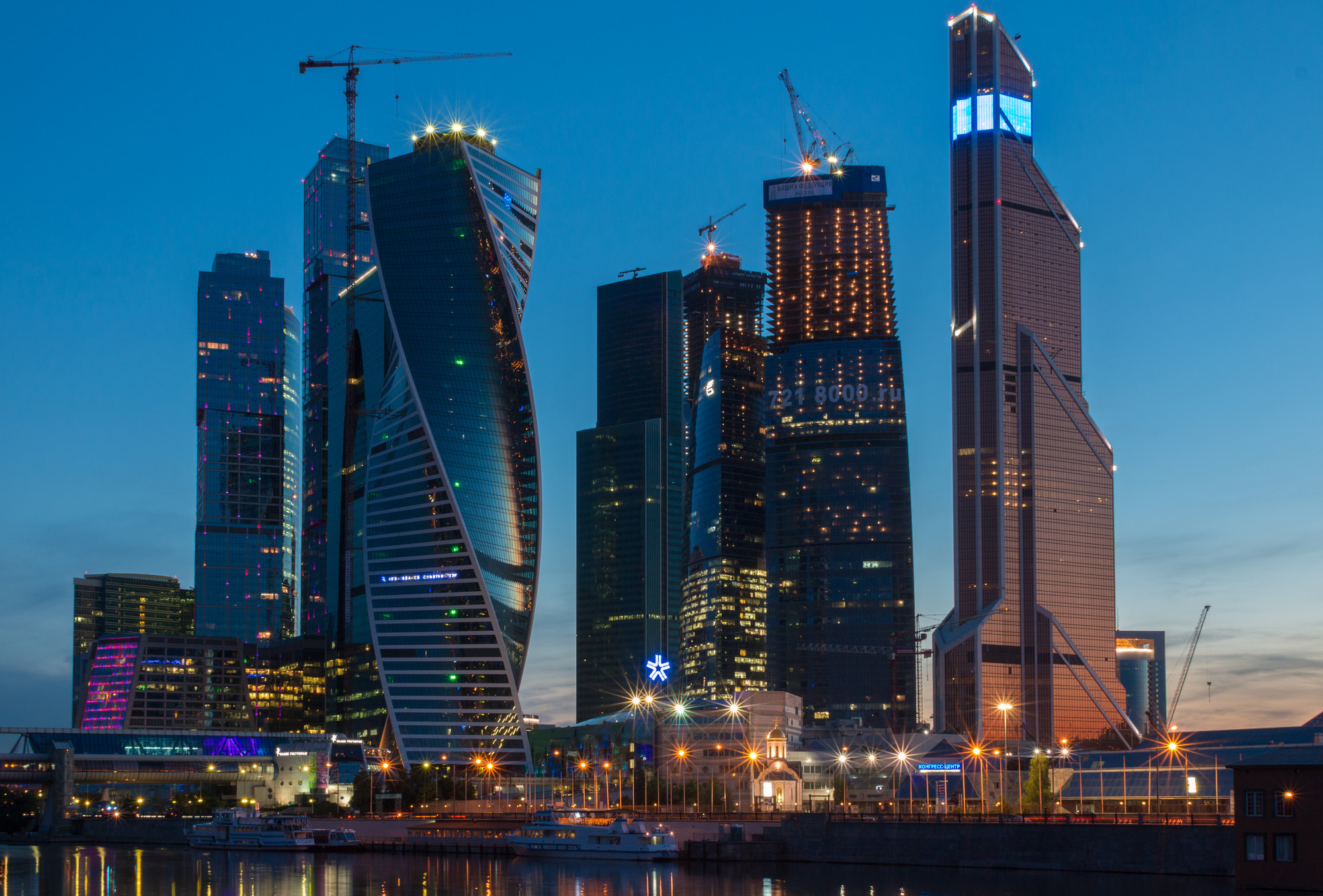 As one might expect from a project of this sheer ambition, Moskva-City has a troubled past. The economic crash in 2008 hit Russia hard enough to evict the previous Mayor of Moscow, Yuri Luzhkov, who had been a cheerleader for the district, and replace him with the considerably more austere Sergei Sobyanin, who famously declared that the whole idea was an “urban planning mistake.” But as recently as 2013, the Wall Street Journal was triumphantly claiming that Moskva-City had risen from the dead, citing 80% occupancy rates and glowing quotes from industry insiders claiming that Moskva-City was the "place to be." Driven by record highs in oil prices, Moscow looked poised to become the next Dubai.

Instead, Moscow is now in the grip of an economic winter prompted by western sanctions and drops in the price of oil. The large financial groupings that Moskva-City was meant to shelter have been warned off by their inability to issue credit to international markets, for example - but Moskva-City isn’t just an Empire State Building left empty by the Great Depression.

A fundamental problem that is holding Moskva back compared to the rest of Moscow is the simple fact that currently, getting to Moskva-City is nigh-on impossible at peak hours. Moscow has long been plagued with transport problems, ever since the government failed to match the dramatic expansion of the city with a dramatic expansion of the transport system after the Second World War. Despite being only 2.5 miles from the Kremlin, Moskva-City is only just inside the ring road that bounds the city center and which acts as the only real transport link to it (and as a result, is clogged by construction vehicles.) A railway and metro hub has been finished, but so far only runs a one-stop shuttle service to the closest Metro station that is actually integrated with the rest of Moscow Metro. The isolation of the outer districts is a large, negative part of the Moscow psyche, and it’s not surprising that this is driving away the globetrotting financial elite this project was meant to attract.

The project is managed by architectural practice No.6, which is a constituent part of the large Moscow based practice Mosproject-2, which is itself a public corporation headed up by Mikhail Vasilyevich Posokhin, who is apparently the “People’s Architect of Russia.” Despite all this state involvement, the project has still managed to become bogged down in bureaucratic infighting - each lot is managed and developed individually, which has led to developers competing for occupants by slashing rates.

Much has been written about the way modern financial districts and towers that inhabit them can be unwelcoming, forbidding or even hostile by design, but the skyscrapers of Moskva-City seem even less friendly than usual. The site - a former stone quarry, chosen out of necessity as the only place in the city center where a new district could be plausibly constructed - is isolated both physically and visually, leaving the cluster a stark anomaly on the city skyline. Even the names seem more imposing than optimistic now: Imperia, City of Capitals, Steel Peak.

The Mercury City Tower, so far the tallest completed building on the site, is officially “a strong reference to Russian constructivism, [which] gives the tower a strong vertical thrust similar to the one found in New York's Chrysler building.” It would be easy to criticize the Mercury City Tower for picking ‘inspirations’ that are so totally opposed to each other - The Chrysler building the defining emblem of American pre-crash confidence and Constructivism created with the express purpose (especially architecturally) of extending the Bolshevik revolution into a social revolution - but the way they smash those two inspirations together is almost beautifully ironic.

Even though the High Level Hostel is less an asset to a financial district than it is a PR problem, it’s been a huge success since opening in September, already ranked 27th out of 766 hostels in Moscow by TripAdvisor. According to the management agency for Moskva-City, 58% of the new occupant signings this year have been non-financial, including a number of small to medium size businesses. Other areas of office space have been occupied by a restaurant and a culinary school, while another space has been redeveloped into a 6,000 seat theater.

While Moskva-City is failing to be a financial district that could take on the world, it’s inadvertently becoming a humanized space catering to the very groups that the Russian economic miracle left behind. Taking advantage of rents lower than the rest of Moscow, the world class facilities and the sheer desperation of the developers, the humanization of Moskva-City could well create the world’s first high-rise bohemia.

Of course, these are not spaces designed for a community, or even for people: these are spaces designed for money, and there’s little scope for changing something that seems so baked into the design of Moskva-City. The High Level Hostel is trading off of the irony of being a hostel in a banking tower, but it’s perfectly possible that at some point people will no longer find this joke funny (especially in a building that seems hostile to the very idea of humor). The isolation of Moskva, even though it allowed this community to spring up in the first place, is just as detrimental to a humanized district as it is to a financial one: even bohemians need to move around the city, or the district risks becoming a black-spot instead of a hot-spot.

Moskva-City’s isolation won’t last forever. The end of construction will open the roads up to traffic, and plans to properly integrate the spur lines of the Metro in this area into the wider system are well under way. The integration of the district will inevitably push up rents, and the Russian economy will eventually boom once again. When that happens, Moskva-City is prime territory to be reconquered by the giants of international finance, and it seems unlikely that the municipal or national governments would want to step in to protect this accidental district. For now, though, the towers capture perfectly this moment of Russia’s schizophrenic understanding of its place in the world.