"The Art of Seeing. It is essential to an architect to know how to see: I mean, to see in such a way that the vision is not overpowered by rational analysis." - Luis Barragán

One of Mexico's greatest architects, Luis Ramiro Barragán Morfín (March 9, 1902 – November 22, 1988) revolutionized modern architecture in the country with his use of bright colors reminiscent of the traditional architecture of Mexico, and with works such as his Casa Barragán, the Chapel of the Capuchinas, the Torres de Satélite, "Los Clubes" (Cuadra San Cristobal and Fuente de los Amantes), and the Casa Gilardi, among many others.

Barragán was born in Guadalajara, graduating as a civil engineer and architect. Two years later in 1925, he started on a journey of two years in Europe, where he was impressed by the beauty of the gardens of the cities he visited and the strong influence of Mediterranean and Muslim culture, and above all of the International Exposition of Modern Industrial and Decorative Arts. It was on this trip where his interest in landscape architecture began.

It seems important to me that spaces are not aggressive. I always used low forms and permanently worked with right angles. At all times in my work, I had in mind the horizontal and vertical planes and angles of intersection. This explains the frequent use of the cube in my architecture.

The atmosphere of the gardens marked what would be his architectural work, integrating straight and solid walls and courtyards open to the sky. With a career of over 30 built works, his combination of lively block colors and serene gardens earned him the Pritzker Prize in 1980, the Jalisco Award in 1985; finally, a year before his death Barragán received Mexico's National Architecture Award.

In recent years, the discussion around Barragán's work has been rekindled thanks to the bizarre circumstances surrounding his archive. In 1995, the archive was purchased by Rolf Fehlbaum, Chairman of the furniture company Vitra, as an engagement gift for his fiancé Federica Zanco. Since then, the archive has been largely off-limits to researchers as Zanco has attempted to organize and catalog the archive, but many have been angered by the lack of access. The situation came to a head in 2016, when artist Jill Magid presented Zanco with a diamond engagement ring made from the ashes of Luis Barragán himself, in the hope of persuading Zanco to provide researchers more access to her original engagement gift.

Are Luis Barragán's Ashes More Important Than His Life's Work? 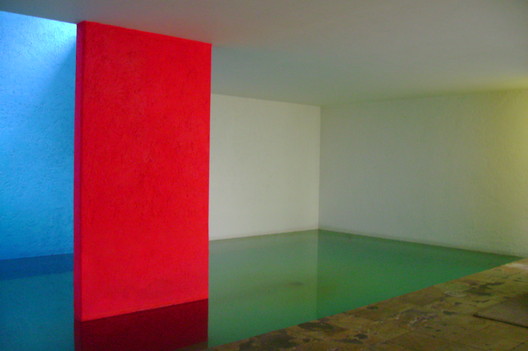