“See the future, create the future,” this is the motto of Dubai’s newly unveiled “Museum of the Future.” The metallic oblong-structure, planned for a corner lot in Dubai’s central financial district next to the Emirates Towers on Sheikh Zayed Road, is said to become “an incubator for ideas and real designs, a driver for innovation and a global destination for inventors and entrepreneurs.”

"The world is entering a new era of accelerated knowledge and great technological revolutions,” tweeted United Arab Emirates prime minister Sheikh Mohammed Bin Rashid Al Maktoum. "We aim to lead in that era, not to follow and lag behind. The Museum of the Future is the first step of many to come, marking the beginning of great achievements."

Holograms, robotics and 3-D printing will play a crucial role in the structure’s realization. Learn more and watch a video fly-through the building after the break. 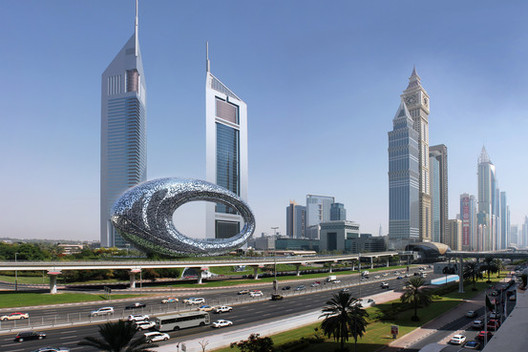 The $136 million museum, as Sheikh Mohammed describes, will feature “innovation labs and permanent exhibit for future inventions” as well as offer “advanced courses and specialized workshops” so it may become “a destination for the best and brightest inventors and entrepreneurs.”

Inscriptions from Sheikh Mohammed's Arabic poetry appears to be etched into the facade, while a massive hologram is shown to fill the structure’s oval-shaped void. Part of the building's structure will be 3-D printed, however no further details have been released.

Museum of the Future is expected to be complete in 2017.