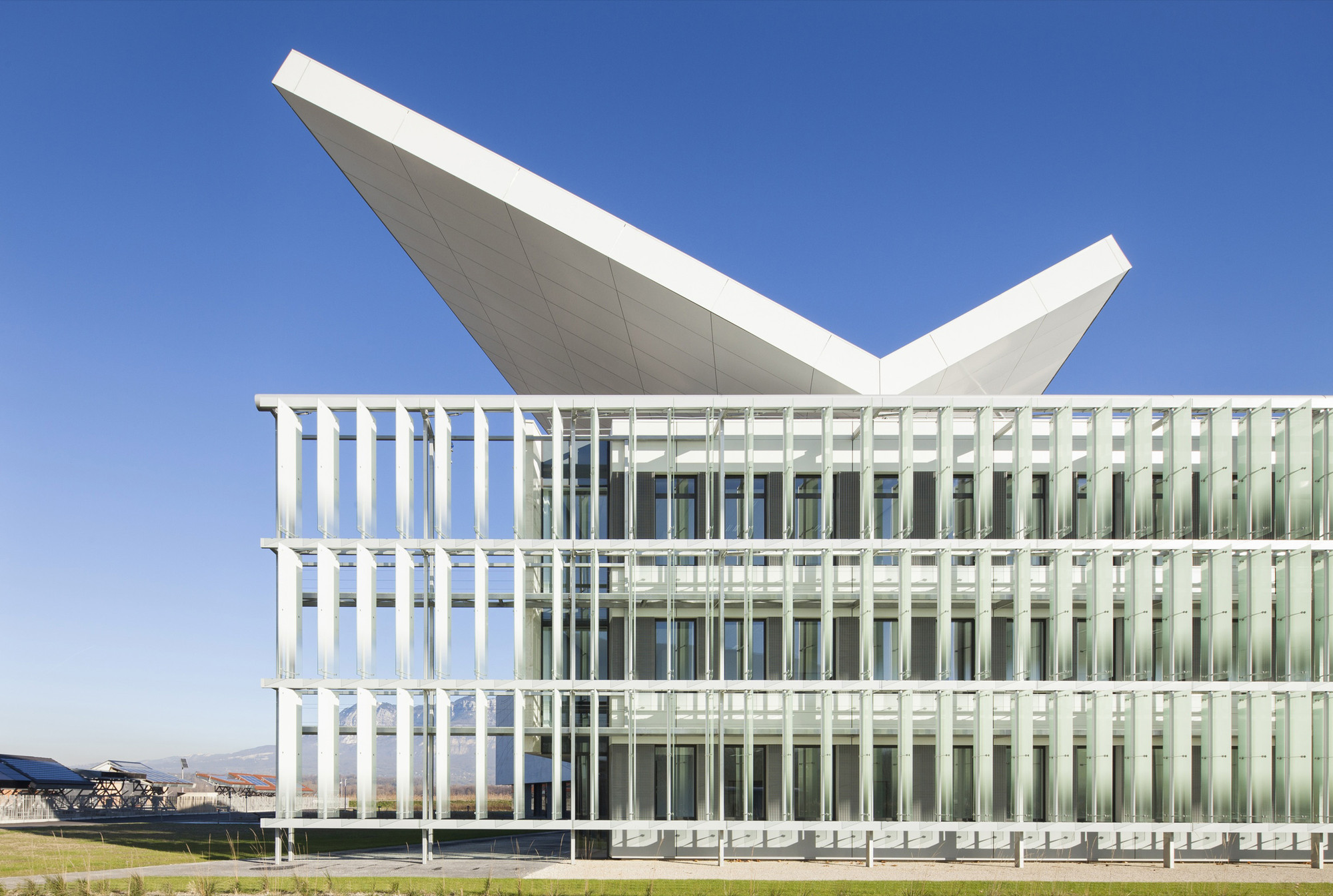 Text description provided by the architects. Located at the southern end of the Savoie Technolac science and technology park in the city of Chambéry, HELIOS is home to the head offices of the National Solar Energy Institute (INES) whose aim is to promote the development of solar energy. Delivered in December 2013, the building houses the institute’s laboratories, the directors’ offices, as well as the administrative services and training department, covering an area of 7,500 sq.m. The building, which is home to all the divisions working to promote and develop solar energy, showcases the design and implementation of these new concepts and techniques. The energy requirements listed in the 2007 call for tender were used as the driving force behind the project.

The €20 million investment needed for such a large-scale project (covering an area of more than 7,500 sq.m.) was funded mainly the General Council of Savoie which put forward €16.6 million. A further €3.4 million was provided jointly by Rhône-Alpes region and the French government.

The architectural firms of Michel Rémon and Frédéric Nicolas worked together to incorporate the specific aspects of the project into the design. In particular these included:

• the functional and technical aspects,

• the bioclimatic, thermal and energy aspects,

• the architectural and urban aspects.

In addition to the existing functional requirements, there was the need for a compact build, linked to a desire to limit heat loss from the building’s envelope. The building is designed as a continuous ring to minimise angles on the building’s façade. This compact horizontal and vertical design provides users with proximity between the various work areas, resulting in a friendly environment in which to conduct research. The indoor area, designed as an atrium, creates a unique atmosphere in terms of light, spatiality, and ambiance. This indoor landscape is an additional space for users to enjoy. The atrium is the heart of the project, and acts both as a living area and provider of energy.

From an architectural, urban and landscape point of view, the shape of the building is well suited to the urban landscape of the science and technology park. It takes into account the local geography, the urban environment, the ground, and the horizon. The various façades are designed in accordance with the surroundings. The avenue façade highlights the sheer scale of the building, while the northern façade is distinguishable from the forecourt by its use of light to illuminate the atrium.

From a bioclimatic and energy point of view, the building was positioned in line with the path of the sun, both throughout the day and throughout the seasons. It opens towards the north allowing the breeze to regulate the temperature in the atrium. Tilted at a 30° angle, the large wing of the thermal sensors faces directly southward. The underside allows the northern breeze in.

The glass roof of the atrium is designed on the same north- south axis, with a slight 10° difference. While the building’s position is designed taking its position on the ground into account, its roof maximises the use of the sun and the wind. This combination is what generates the building’s complexity, the vibrations of its envelope, its symbolism and poetry in line with the scale of the surrounding mountainous landscape. The building incorporates both urban and natural elements into its design.

The building is home to highly technical research and includes several laboratories and areas with high internal thermal loads requiring appropriate ventilation and air conditioning. The challenge was to provide a building that does not use refrigerant fluid or fossil fuels, and does not emit CO2. To do so, the architects took the basic energy requirements – annual consumption below 27 kWh per sq.m, and at least 40% of energy provided by solar power – and used them as the driving force behind the project rather than as a constraint.

They developed a cross-disciplinary and contextual approach that combines the urban and functional requirements with the climatic factors (in particular, the direction of the sun), giving the building its dynamic strength. As such, the large roof structure that supports the sensors and the glass covering the central atrium are positioned at a 27-degree angle from the rest of the building so that they remain facing directly southward. The building itself fulfils the requirements of energy consumption and comfort through the use of seasonal strategies (winter, summer and the seasons in between) backed by dynamic thermal simulations.

The compact design of the building reduces heat loss and improves the overall heating efficiency of the building. The walls are hyper-insulated and the thermal bridges are insulated from the outside.

The façades were each designed differently in order to filter the outside atmosphere, which is usually uncontrollable and often lacking in comfort. The solar protection of the bay windows (which offer natural light and warmth) reduce the need for active cooling and heating systems. Finally, the building has a high level of thermal inertia (ranging from 775 to 926 kJ per sq.m.), spread between the floor and the façades, thereby fulfilling the flexibility requirements and absorbing high temperatures in the summer months. The creation of the central atrium, which gives the building a moderate temperature and allows it to breathe, optimises the use of natural light, reduces heat loss and promotes natural ventilation.

Heat is produced by 280 sq.m. of solar sensors which cover around 40% of heating needs, as well as a wood pellet burner. The (radiator type) hydraulic distribution and heat emission systems are designed with a variable flow rate and are capable of low temperatures (and a basic maximum temperature of 45 °C) in order to reduce loss of heat distribution and emission, and to maximise the potential heat recovery and contribution from solar heating. In summer, the building temperature is controlled with natural cooling and special night-time ventilation. The exceptionally unidirectional wind rose enabled the designers to come up with a night-time cooling strategy using natural ventilation.

Water management was given special attention by the designers. The systems they came up with include water pressure regulators and reducing valves, dual toilet flushing systems, timer taps, leak detectors, and limited soil sealing. A solar power generator is located on the southern section of the roof and is connected to the building’s internal network for in-house consumption (3KWc installed). 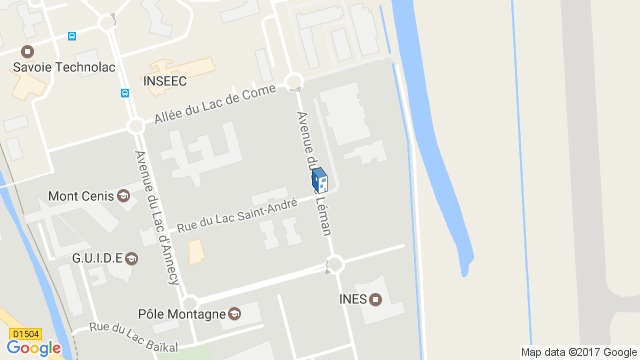 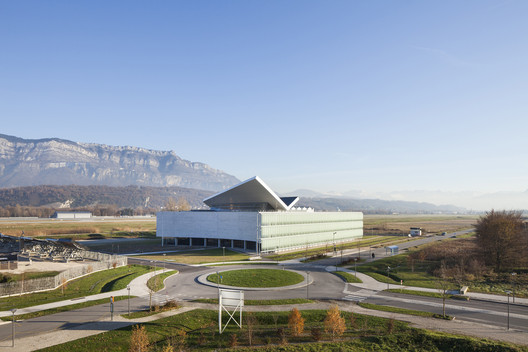 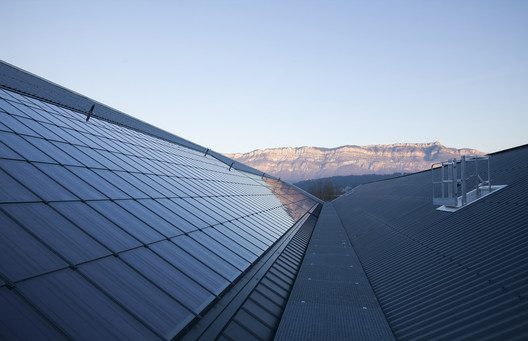 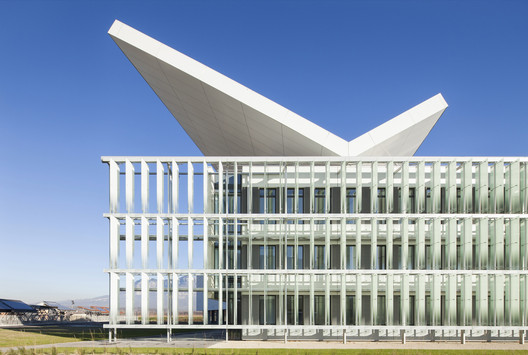