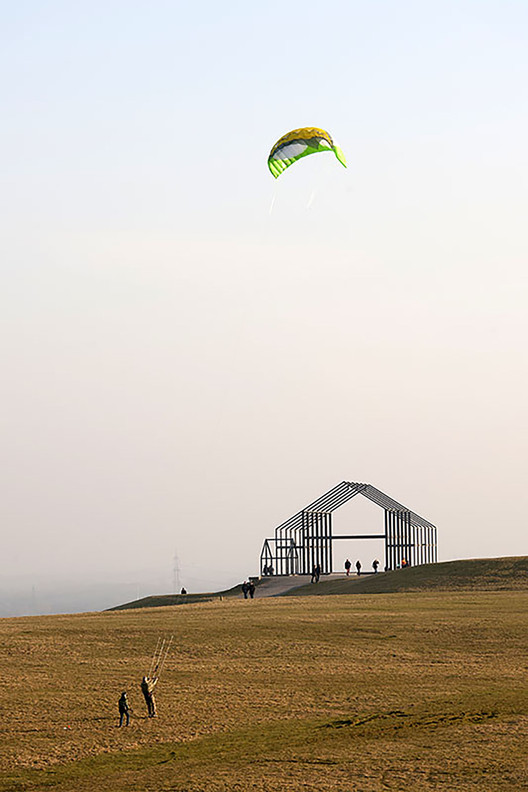 Text description provided by the architects. Steel sculpture on a coal slag heap alongside the A57 motorway. The hall is 16 metres long, 14 wide and 10 high. It is a landmark, a place of tranquillity and a historical reference. It is also the main building of the Open-Air University, an educational programme by Observatorium.

Design what is there

Emptiness and silence are hard to design. Where available, Observatorium incorporates these characteristics into the design. There are three ways to do it: do nothing, protect them, and make them visible.

Emptiness and silence can be hard to design, and when these qualities are present, the design must aim to protect them. It is important to realize how much mystery and how much perfection a non-designed space possesses. For an incipient recreational facility, for a district which is subject to major economic developments and, especially, for a region where huge power stations mingle with historic farmhouses, the incomplete building is a symbol of change and optimism.

Observatorium's Hallenhaus frames the splendid panorama and gives the bare plateau a distinct identity. Despite the openness of the structure, the sculpture feels like an interior with picture windows. It exerts a concentrated force on many visitors. The subtle blend of sanctity and profanity that every large barn possesses is all the more conspicuous here due to the Acropolis-like setting.

In Berlin, preparations for Observatorium's Autorenwerkstatt exhibition were interrupted by an unannounced visit by Marie Cathleen Haff, a member of the Dutch Embassy staff. She asked for information and took some of Observatorium's slides with her to illustrate a lecture on contemporary art in the Netherlands. She later heard about the design for Observatorium Nieuw Terbregge, and included an article about it in an embassy publication on contemporary Dutch landscape architecture. She was also responsible for putting Observatorium in touch with Thies Schröder, an organizer of symposiums and an editor of publications about landscape architecture.

Schröder invited Observatorium to take part in a panel debate in Potsdam. Even before the start of the debate, Andre Dekker and Prof. Hinnerk Wehberg fell into an animated discussion. The professor ended the day by suggesting to Observatorium: "How about collaborating on a competition entry?" One year later, the newcomers to the discipline of art in the public space found themselves working as a team together with WES & Partner, a large landscape architecture firm from Hamburg. And, a year after that, they won a commission for a huge landscape remodelling project in the Ruhr redevelopment region.

Halde Norddeutschland is an 80 metre high plateau of 100 hectares in area. This relic of coal mining industry has been designated as a node in a network of sports and recreational facilities in the Niederrhein landscape for the multi-million population of the Ruhr region. Closure of the coal mines caused considerable unemployment in Niederrhein, situated between the Ruhr and the Dutch border. The urban planner Thomas Sieverts, known for coining the term Zwischenstadt (which refers to a sprawling, incoherent style of development which is neither town nor country), drew up a plan to promote leisure development in the area: Landschaftspark Niederrhein.

Halde Norddeutschland is a centrally located attraction within this plan. It is a parkland area suitable for walking, cycling, paragliding, equestrian sport and much else. It is also intended to attract investors in recreational amenities. The core aims of the project were threefold: integration of the slag heap into the landscape, development of the heap into a recreational facility (which would generate new jobs) and creation of a landmark.

WES & Partner and Observatorium entered the design competition and were so impressed by the landscape potential of the slag heap, that they chose Kein Remmidemmi ("cut the noise") as a motto for their design. The heap must not be turned into a plinth for the leisure industry, but into a place for contemplation. If building had to take place there, then it ought to be something for monks and seekers after tranquillity. Instead of using the elevation to build toboggan runs and restaurants, the designers visualized a monastery with a central courtyard. WES & Partner found a monastic community whose members were amenable to relocation, and pulled out all the stops to convince the jury of the importance of peace, quiet and wellness. They marked the vanished river courses around the plateau with large circles of trees, and designed a Himmelsleiter (Jacob's Ladder) monument.

Observatorium designed a landmark for the location. The design won the first prize, but then it had to be adapted quickly to the reality of a declining economy. Provisionally, funds were available only for the landmark, a car park and the Jacob's Ladder. Hallenhaus The idea for the landmark was born when the artists read Silent Spaces, a book about the history of barn building by the photographer Malcolm Kirk. One particular photo attracted their interest – the reassembly of the Deertz Barn on a hilltop in upstate New York. The space created by the wooden skeleton of the barn reminded them of the spatial sensation of a temple or cathedral. Pioneering Dutch and German immigrants to the USA had between them developed a new type of barn which blended their two traditions.

The resulting "Dutch barn" was based on the los hoes, a Saxon farmhouse type with an unpartitioned interior which also occurs in the east of the Netherlands, and the Hallenhaus (hall house) from Lower Saxony in Germany, characterized by division into a central hall and two side bays. The hall house is a variant of an ancient architectural type which developed in the course of history into a practical building for agriculture, industry and residence, and was also used for ecclesiastical purposes. The hall house typically had three uses: grain storage, sheltering livestock and housing for the farming family.

A Dutch barn in Germany

The Hallenhaus sculpture consists of steel trusses and can be completely disassembled. The component elements, each of which consists of twelve lightweight beams, can be unscrewed without any danger that the remainder will collapse. Two sections were extracted from the overall structure and placed alongside the Hallenhaus, which is actually just a big construction kit. The structure rests on a concrete plinth which provides seating space all around.

Large as the Hallenhaus appears to someone standing in its interior, it seems little more than a pencil sketch when viewed from below. It tells passing motorists on the A57 motorway that, after 50 years of being terra incognita, the huge mound is now accessible and is a place from which you can look back at the mundane world whenever you feel like standing outside it. The Hallenhaus can also be regarded as a structure that frames emptiness and expansiveness. Despite its overall size, it succeeds in underlining the design team's wish to keep the plateau as empty as possible.

Observatorium received more and more invitations from universities and other higher education institutes. Quite often, following a lecture or workshop, students would rush to their computers to seek reference images and existing solutions. Jacob Voorthuis, an assistant professor in architecture theory at Eindhoven University of Technology, gave Observatorium a free hand in arranging a workshop course. They decided to create an "open-air university", a virtual institution which would encompass all Observatorium's educational activities.

It would take the students outdoors and address as much paradox as possible: reality awareness versus amazement, and free design versus communal consciousness. The Hallenhaus and the slag heap were declared the Open-Air University. Is it possible to combine culture and education with a recreational site? The students paid visits to the pioneering landscape, and were assigned the following task: to take up residence on the plateau and make an ideal house, bearing in mind that the settlement is on public ground and that the panorama from the top of the plateau is a valuable asset.

Two suggestions were offered for consideration: don't just take from the plateau but also give to the plateau and incorporate a division between public and private into your building. Freedom of establishment on the recreation site yielded some intriguingly paradoxical designs: a cemetery with a caretaker's dwelling, a public library with upper floor dwelling on a public road, and a villa with a swimming pool that doubles as a gatehouse. Later on, workshops and exhibitions were held in collaboration with Wuppertal University and the Gerrit Rietveld Academie, Amsterdam. 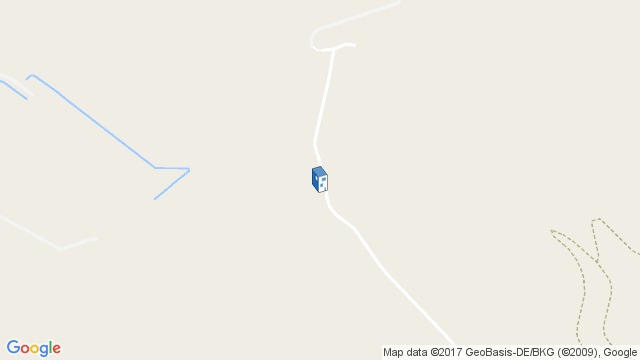