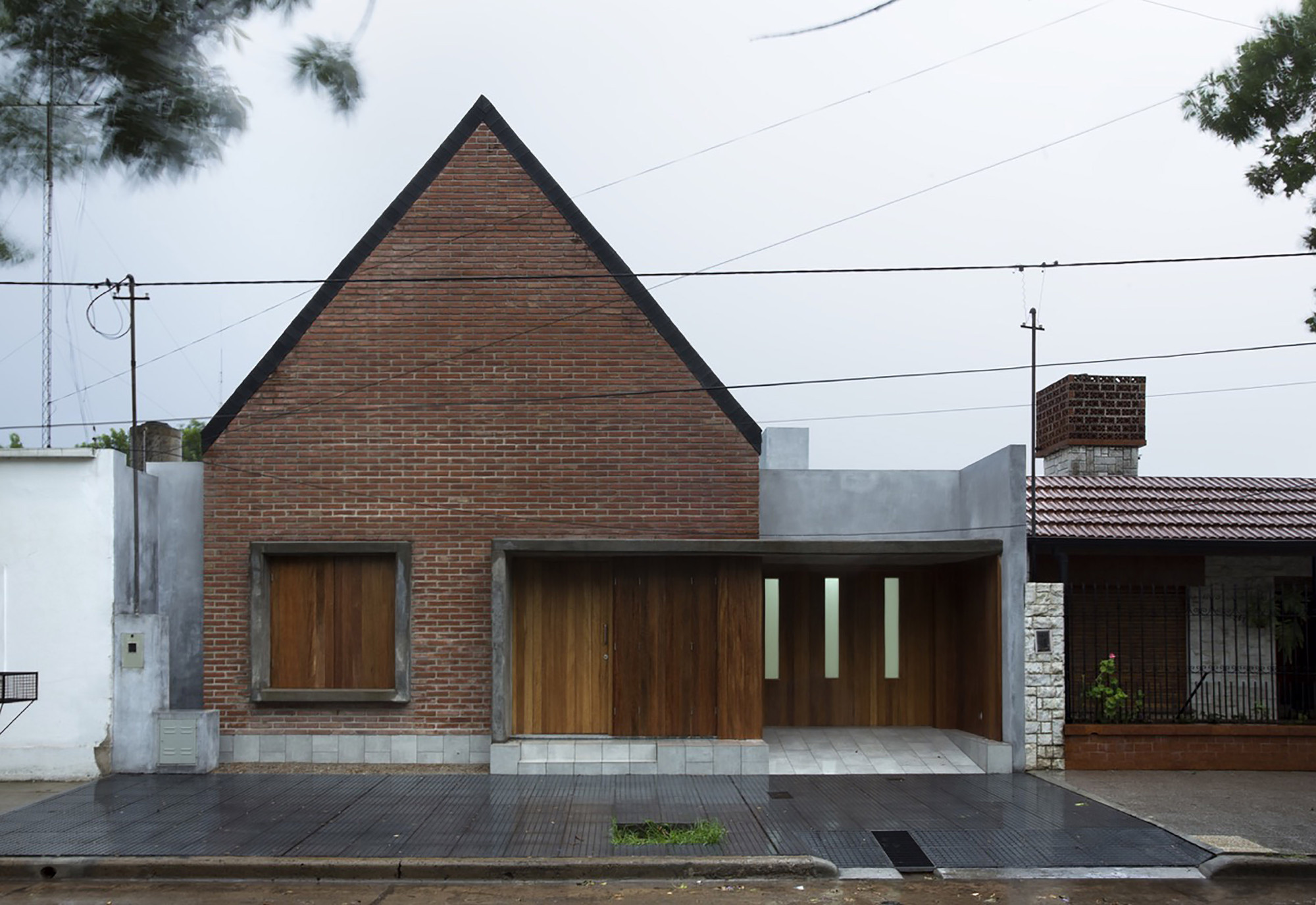 Text description provided by the architects. The project is located in the Argentina Pampa, a flat territory, in a city where the checkerboard order and uniformity that was planned is disrupted by the diversity of the buildings.

The house addresses the reform and expansion of a prefabricated home, Californian style, with pitched roof, and between party walls. The three ideas were:

a_ To take advantage of part of the existing house

b_ To keep the layout and circulation (functional criteria)

The project arises from preserving the footprint of the house, replacing the weak walls by other capable of supporting a second floor that arises from stretching up the pitched roof, creating a living space, with flexible uses and integrated to the house.

The formal result of this operation is the archetypal house. An abstract volume shaped as a vertical rectangle whose upper half is cut into two slanted planes. The volume is released from the party walls and is brought to the front to emphasize its geometry, bringing the facade to the sidewalk and receding the side walls, which close the party walls and take the height of the neighbors.

The house is built in an environment of low houses. The second floor causes a peak in the urban facade and due to its height and geometry it contrasts with the context.

This contrast is also repeated in the same project. While the exterior is perceived with a rugged character due to the imperfections of the exposed concrete and brick, the interior is perceived smooth, materialized with pure and refined lines of painted white plaster and the warmth of wood.

The ground floor is defined preserving the program, circulation, access and relationships of spaces, similar to the original house so that those who re-inhabit it recognize their home, making only small changes to better redistribute the surface and find that each room has natural light and ventilation.

The upper level is more free, undivided and integrated with the ground floor through a double height with the stairs and a bridge to exit to the terrace.

The exterior walls are built very thick, so they give depth and accentuate the openings, while niches are generated to place built-in closets. The windows piercing the volume have a square matrix, and on their width a person can sit and read, drink, or look out. They are a clear and decisive element.

The design of the house arises from the desire to respond to the constraints posed by the project, and both formal and functional decisions have been taken to respond to such constraints. The house will always contrast with its context, but its inhabitants will continue to recognize it in each step.