All
Projects
Products
Events
Competitions
Save
Light Matters: Le Corbusier and the Trinity of Light
Share
Or
Copy

Light has been linked with divinity and holiness in many different religions. In Christianity the Bible speaks of God who “is light” or Christ as “the light of the world”. Even if the divine light and visible light are not the same, visible light appears as the most similar to the heavenly and thereby links both spheres. Each epoch has formed a new language of light: The glow of the Romanesque apse, the golden shimmer of Byzantine mosaics or the luminous walls of Gothic stained glass. As an artist as well as an architect, Le Corbusier expressed an exceptional sensitivity for the interaction of colours and light in his sacred buildings. His position as an outspoken agnostic seems very ambivalent in combination with his desire to open the soul to poetic realms.

Studying Le Corbusier's sacred buildings for more than four decades has led to a deep fascination for Henry Plummer regarding the transformative power of light: “Instead of serving as a tool of religious persuasion, as it generally has in the past, light has become a quiet force to visually resist and elude, erode and outshine, the Church´s mandate. Light eats away and weakens institutional discipline, while exerting its own dazzling powers to draw attention out to the sky and its commonplace marvels – in effect using light to consecrate the natural universe”.

The main characteristic of the Chapel of Notre Dame du Haut at Ronchamp (1950-55) comes, for Plummer, from the continuous circle of solar events. The dawning sun illuminates the alcove of the side chapel and turns the red-painted void even redder. For Plummer this reddish morning light is a clear analogy to human birth. Later, sun floods the tall slot between the east and south walls, continuous with the rays of light through the deep cavities of the south wall. The small horizontal crack of ten centimetres lifts the roof from the wall and creates a harsh contrast to the glow of the vertical brise-soleil at the southeast corner. The cycle culminates finally in a warm glow from an opening in another side chapel at sunset.

The light orchestration at La Tourette is more complex and widely dispersed in comparison to Ronchamp, remarks Plummer. The Monastery of Sainte Marie de la Tourette at Éveux-sur-l’Arbresle (1953-60), with its rectilinear geometry, embodies a clear counterpoint to the poetic forms of Ronchamp and Firminy. Due to the fact that all corridors have an open side facing one of the four cardinal directions, the believers encounter diverse light experiences. Additionally, the corridors are distinguished with different window arrangements. The irregular rhythm of light and shadow appears like a musical composition, notes Plummer when he observes the corridor to the atrium: “Unlike the repetitive rhythms of windows and columns in traditional churches, these fluent rhythms are aperiodic, based upon intervals of light and transparency that gradually compress and expand in waves. The lovingly cadenced beats have the intonation and flow of music – not orchestral music, but chant-like sounds, whose tones help to draw people further into a contemplative state.”

The highlight of the light choreography in La Tourette's church begins with the sunset. A crack atop the west wall draws warm lines along the side walls. The north wall connects the two golden lines and with the falling sun the line slowly moves upward. The dramatic atmosphere increases till the moment when the golden light hits the slight upward tilted roof plane and grazes over the tactile ceiling of prefabricated slabs. This effect changes with the seasons – ranging form a small triangle in winter to a large rectangle in summer when the sun reaches its maximum power.

The scenography at the church of Saint-Pierre at Firminy (1960-2006) is arranged in three acts. The small stellar windows on the east façade generate dots of light on the floor which later mysteriously turn into waves of light. These waves gently rise and fall with the course of the sun. They create an astonishing pattern over all three walls facing the altar. Polycarbonate cylinders with concentric grooves holding the glue cause these impressive wave effects. The luminous pattern appeared unexpectedly for the client when the cylinders were mounted into the concrete wall. Plummer points out, that Le Corbusier could not have envisioned this phenomenon - particularly as the actual construction of the building wasn't carried out until decades after his death - but it is known that he delighted in, and often encouraged, accidents of construction, especially when they enhanced the character of the building.

Around noon the waves of light disappear and sunlight from two angled tubes in the roof strikes down into the darkness with sharply defined beams. On overcast days, two soft luminous veils emerge on the walls. With the approach of the sunset a golden light shoots into the church and hits the altar wall. A rectilinear light cannon projects the intense warm sunlight onto the interior wall while a cool sky blue falls softly through the stellar windows. Here the cosmic scenes of day and night appear mysteriously together.

Le Corbusier’s light techniques emerge as a multifaceted language to consecrate his sacred buildings. His dynamic layers of light transcend the static building volumes - a cosmic cycle that changes with the course of the day, year and with a clear or overcast sky. His structural elements range from tiny stellar openings to large tubes, but even small interventions are used to generate remarkable light patterns that reflect cosmic power. Le Corbusier expressed his consciousness of the cosmic power of light in his personal synthesis of maxims in the beginning of “The Poem of the Right Angle” (Le poème de l’angle droit, 1955, translated to English by Henry Plummer):

The sun master of our lives
far off indifferent
He is the visitor – an overlord
he enters our house
In setting he says good evening
to this mossy earth (oh trees)
to these puddles everywhere
(oh seas) and to our lofty
wrinkles (Andes, Alps and
Himalayas). And the lamps
are lit up.
Punctual machine turning
since time immemorial
awakens every instant of the
twenty-four hours the gradation
the nuance the imperceptible
almost providing
a measure. Yet brutally
he breaks it twice –
night and day – these two phases
rule our destiny:
A sun rises
a sun sets
a sun rises anew 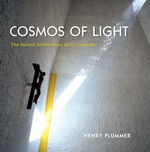 Light matters, a monthly column on light and space, is written by Thomas Schielke. Based in Germany, he is fascinated by architectural lighting and works for the lighting company and academy DIAL. He has published numerous articles and co-authored the book “Light Perspectives.” For more information check www.arclighting.de or follow him @arcspaces