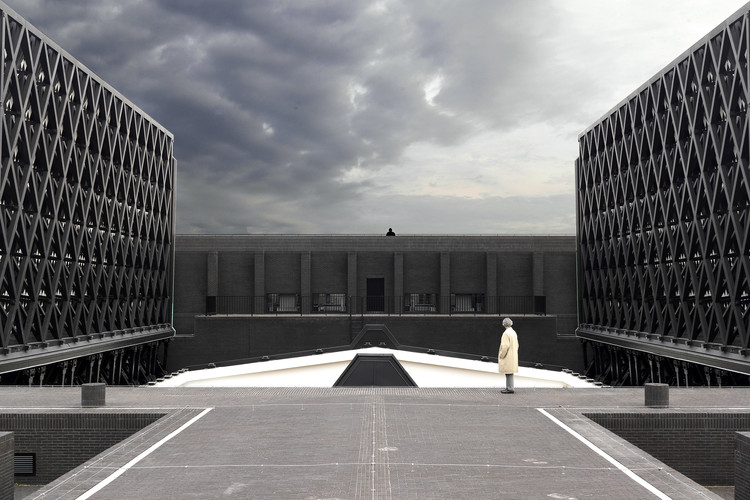 A-Historically: the Baltic city had already known at the beginning of the seventeenth century the wooden building of the Elizabethan Theatre. After about four centuries builds the new theatre on the same place, but in an urban and landscape context completely different, restarting from their archaeological traces found of that far away presence.

B- Politically: in 2004, there was an international competiton for the design of the new Elizabethan Theatre. As if the new theatre had to represent on the stage of Gdansk of the reversal of the political horizon.

The theatre building is divided formally and functionally into three main parts:

the walkway around the outer edges, the theatre itself, the administrative area.

The outer edges are public passageways leading around the whole complex. This new pedestrian urban platform lies six metres above the entrance level. The height offers a new viewpoint of the historic and modern city with its contrasts and compositional counterpoints. Functionally, the edges ensure escape ways from the theatre, and pedestrian links with all the levels of the complex, including that of the basement at five metres below level ground.

On the outside, the theatre’s silhouette is characterised by three general aspects: volumes, masonry ribs, and an openable roof.

From the volume’s profile two very distinct parts emerge. The first belongs to the Elizabethan theatre, and sets the high of the building to 12.00m. The second belongs to the 18.00m high scenic tower. Technical, systems related and symbolic requirements make it the highest panoramic point. When the theatre roof is open, the view from the tower includes the interior of the theatre.

Masonry ribs in the outer walls characterise the volumes of the theatre and scenic tower. On the outside, they indicate the rhythm of the modular indoor structure. They are needed to absorb the pressure that the open “wings” of the roof exert on the walls below in order to contrast the force of northerly winds.

Openable roof. It comes from typological and symbolic needs. With its wings opened straight up, the edges reach a height of 24 metres, concluding the vertical progression of levels (6, 12, 18, 24m). In plan, the whole assumes the figure of a diapason with the main axis oriented east-west. The scenic tower transversely divides the theatre area from the administrative one. Its central position restricts the pathways of the outer pedestrian edges. Situated within the perimeter of the diapason (3.6 metres thick) are all the horizontal and vertical walkways. This figuratively autonomous part is set back from the outer edges precisely in order to express the spatial hierarchy between the different formal systems.

In contrast to the gravity and compactness of the outer walls, the interiors of the building are in light wood of two types, one for the Elizabethan theatre, and one for the suspended volume above the foyer. For the former, the typological module of 2.8 x 2.8 x 2.8 metres is taken from the one found during archaeological excavations of the site. In plan, there are six modules on the two long sides and five on the one short side, making a C-shaped figure. All in all, there are 51 modules for about 600 spectators. Wooden columns (25 x 25 centimetres) contain an internal steel structure and are positioned in accordance with the modular pattern of the galleries.

The Elizabethan and Italian stages are fully mechanised to meet the theatre’s varying configuration needs. The stage movement technology is located in the base below the floor slab. The stages are mobile, almost in response to the wings of the roof. In the foyer volume, a suspended box offsets the external masses. A large double height room overlooks the different types of voids that distinguish and envelop the entry spaces, from the museum area in the basement to the galleries of the theatre itself. When the wings open, the sun rays can extend until the basement.

It contains all secondary activities of the theatre. Offices, surveillance, restaurant, dressing rooms, etc. A two floors volume, with a roof terrace at the same level with the outer edges from which it is possible to access the square roof open to the entire city. Another unexpected place for representations. The third "stage".

The fourth "stage": the one that looks to the sky of Gdansk, the sky of Shakespeare, the inner sky of each of us. 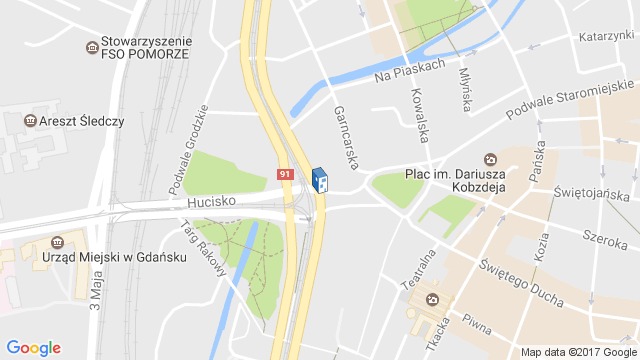 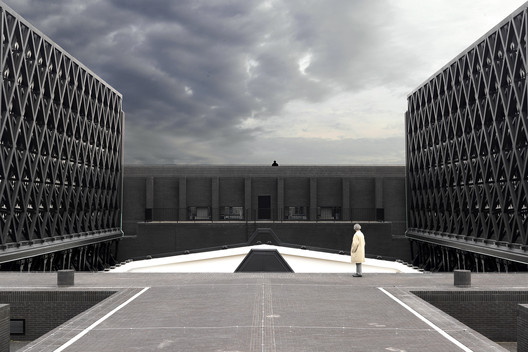