The Museum of Fine Arts, Houston (MFAH) has released plans for an ambitious $450 million expansion that will transform it into one of the largest art campuses in the US. The 14-acre masterplan will include three new buildings - one by Texas-based Lake|Flato Architects and two others by museum aficionado Steven Holl Architects - connected by a pedestrianized landscape of reflecting pools and gardens.

The first scheduled to break ground (this year) is the Steven Holl-designed, 80,000-square-foot new home for the Glassell School of Art. The L-shaped, pre-cast concrete structure will, as MFAH describes, pride itself as an extension of the campus landscape, featuring a stepped amphitheater that leads up to a walkable, trellised roof garden. 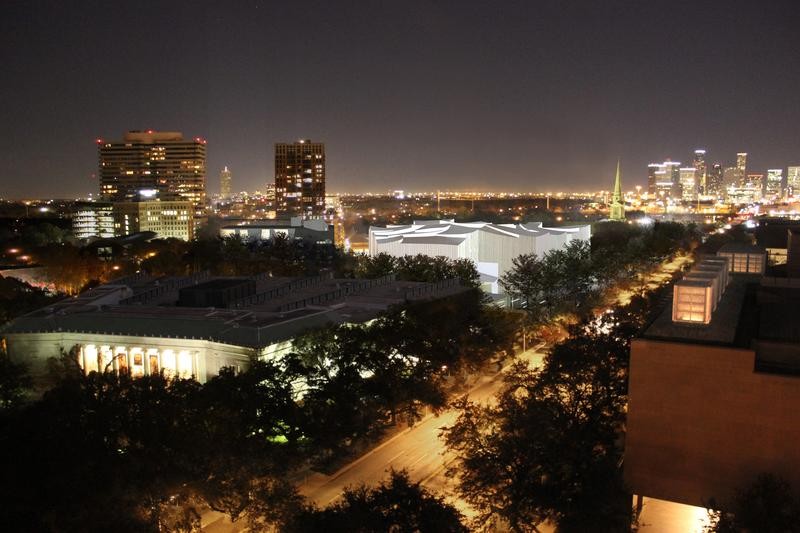 Soon after Glassell, Lake|Flato Architects will begin construction on the Sarah Campbell Blaffer Foundation Center for Conservation. Both, the conservation center and School of Art are expected to be complete by 2017.

The expansion’s third and final structure to be constructed is the Nancy and Rich Kinder Building, also designed by Steven Holl Architects. A “complimentary contrast to the Ludwig Mies van der Rohe-designed Caroline Wiess Law Building (1958/74) and stone facade of Rafael Moneo’s Audrey Jones Beck Building (2000), the 164,000-square-foot exhibition building will be entirely dedicated to 20th- and 21st-century art.

At the ground level, seven vertical gardens will punctuate the building's largely translucent facade, while two floors of gallery space centers around a three-level atrium - all housed beneath the structure’s “luminous canopy” that deliberately references the “billowing clouds” of Texas’ “big sky.” A 202-seat Lynn and Oscar Wyatt Theater, restaurant, café, and meeting rooms will also be included within the building.

The entire expansion is slated for completion by 2019.