If you were a Greek tourist in the 1st century BCE you would likely have had something in your hand that would be quite familiar here in the 21st century. A guide book. The most popular guide book of the Hellenic world listed seven wonders of the world that should be visited by any Greek traveler.

Of those seven wonders, six no longer exist. The Colossus of Rhodes, the Lighthouse of Alexandria, and the Mausoleum at Halicarnassus were lost to natural causes, the Temple of Artemis and Statue of Zues destroyed by human hands, and no one knows what happened to the Hanging Gardens. The remaining wonder is the Great Pyramid of Giza. This colossal Egyptian structure is so grand a work that even today, 4,500 years after its construction, it is still considered by some to be the most impressive civil engineering project in history, beating out feats like the Panama Canal, the Hoover Dam, and the Golden Gate Bridge.

The pyramid isn’t just an ancient wonder. Just as the Great Pyramid has managed to survive into modern times, so has our love affair with the simple but powerful angled shape. Modern architects and engineers continue to build pyramids. These modern pyramids may not be stone tombs to ancient pharaohs, but are no less stunning for all that. Read on after the break for six examples. 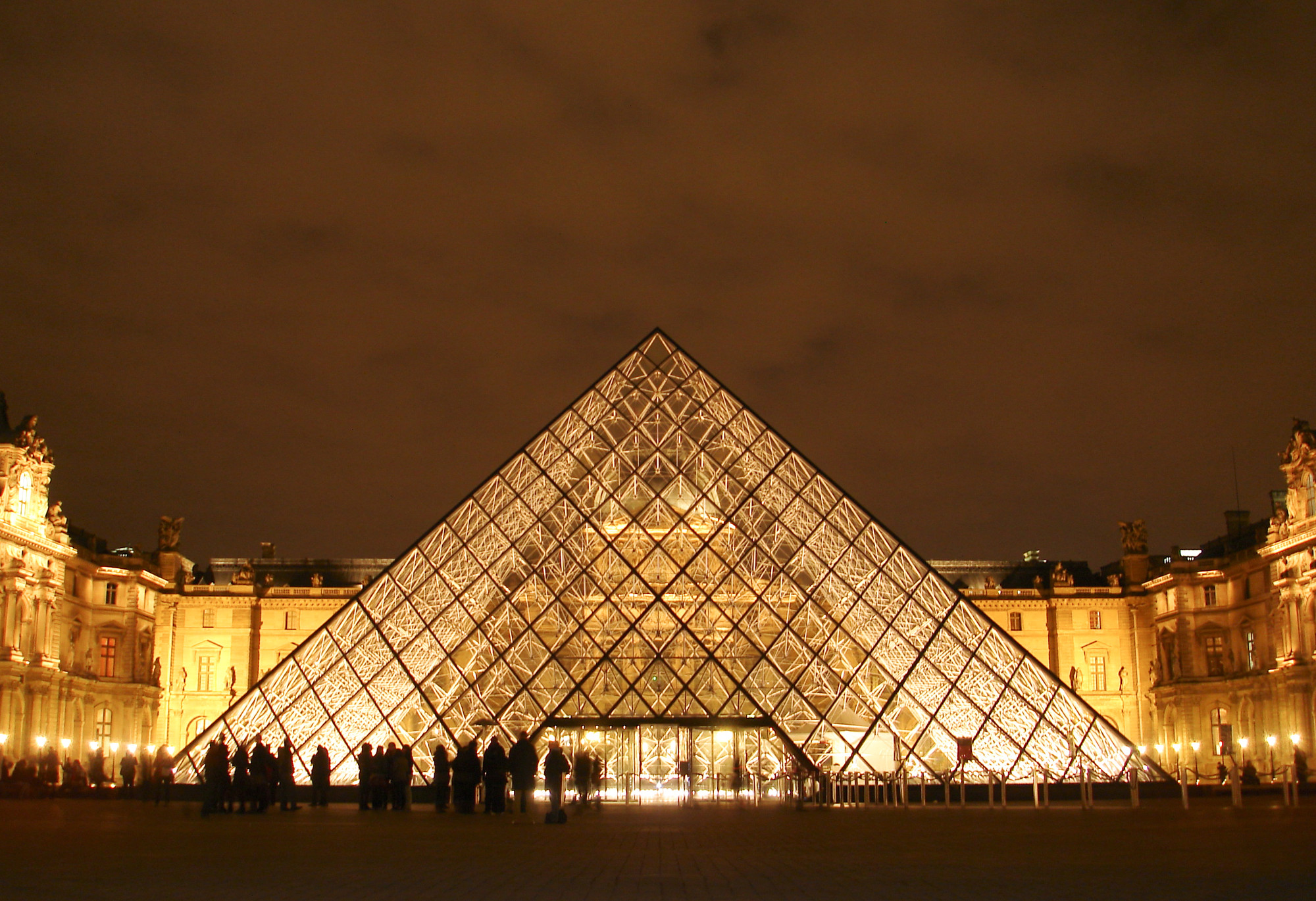 Mexican architect Juan Carlos Ramos hasn’t actually built his latest project yet, but it’s turning heads anyway, and earns its place in this list. Ramos’ Pyramid House is a comfy three-story home which incorporates pristine white surfaces with the clean geometry. Glass windows interrupt the smooth surfaces of the pyramidal sides, elevating this simplistic shape to become a live-in sculpture.

This structure, if built, will boast two bedrooms, a library, studio, bathroom with pool, and a one-car garage. One slope of the pyramid is completely encased in glass, allowing an unimpeded view for anyone in the kitchen, living and dining room, second floor balcony, and third story library. This home is airy, well lit, and will happily fit a small family of 3-4 people.

Ramos designed the house for a competition that was focused on simple geometry. Inspired by the landscape of his native state of Michoacán, Mexico, he rejected the functionalist insistence on vertical walls in favor of the more spiritual shape of the mountains and ancient temples of the Mayans. “The pyramid house was created with the intention of improving the experience of living in a house as a reflection of the human being through the beauty of the architecture,” he says.

The Nima Sand Museum in Japan is not one pyramid, it’s six. The tallest was designed as a home for a particularly unusual tourist attraction, the world’s largest hourglass. This fully functional sand timer is no three minute timer, but measures the length of one full year, having to be flipped at midnight, December 31st/January 1st every year. The pyramid over it stands 69 feet (21 meters) high with a 56 foot (17 meter) base.

Architect Shin Takamatsu is rumored to have designed the free standing glass structure to be visible from the site of his mother’s grave. What is not a rumor is the fact that the pyramids of Egypt were a direct inspiration for the design: “I envisaged symbolizing as architecture the overwhelming presence of that harmonious scene of larger and smaller pyramids,” he explains.

The remaining five glass pyramids were all designed for an equally unusual purpose. Nima is a beachside resort town with “singing sand”. When walked on, dunes made of this peculiar sand elicit squeaks and music-like tones. The pyramids contain art exhibits made using sand from Nima’s dunes. It is appropriate that a museum for sand would be designed with glass, originally a silica-sand based product.

The Bolz Conservatory is one of the gems of Wisconsin’s Olbrich Botanical Gardens. Designed by Stuart Gallaher, this pyramid is made of glass panels and rises to a 50 foot (15 meter) high peak. It cost $4.6 million to build and opened in November 1991. Inside this jewel of a greenhouse, a lively stream drops down a 20 foot (6 meter) high waterfall before flowing among the nearly 500 different species of plants on display. The glass paneling and computerized control allows the interior to remain between 65 and 90 degrees F even during the cold Madison winters. Spray nozzles built into the structure maintain the humidity at a minimum of 60%. Among the riotous colors and smells of tropical flowers visitors can see free flying canaries, doves, and quail who serve as a natural insecticide, while the stream hosts goldfish and Japanese koi that can reach three feet long.

All of this means that the Bolz Conservatory is more than just a pyramid structure; it is a crystal temple built to enshrine nature in all of its beauty and grace.

The Louvre is famed for its world class collection of artworks from throughout history. An international tourist attraction that draws in nearly 10 million visitors a year, it also hosts three glass pyramids in the courtyard.

Commissioned by President François Mitterrand, it was designed by famed architect I. M. Pei. The tallest of the three pyramids stands 71 feet (21.6 meters) tall and has a width at the base of 115 feet (35 meters). 673 glass panes enclose the structure, held together by a steel frame, similar to the designs in Nima and Olbrich. The structure cost 75 million francs and opened in 1989.

At the time the pyramid was a controversial work. Its very modern design stood in stark contrast to the traditional look of the Louvre itself, leading some to air accusations of a gross mismatch of styles. The design has won over many fans, however, citing it as being a perfect encapsulation of the Louvre itself, creating a blend of the old and the new just as the artworks inside blend the art of all human history.

Gibbs built the exterior out of corrugated aluminum and hung it on a free standing framework made of 18,000 steel tubes. 160,000 bolts hold it together, allowing an open interior that covers nearly three acres. This open space can contain three basketball courts and four half-courts, or nine volleyball courts at any given time, as well as hosting a fitness center and classroom space. For large games, Gibbs included a cantilever system that lowers the seating into place using hydraulics capable of moving eighty-one tons.

The ancient Greeks were great lovers of athletics, and so these founders of the Olympics would doubtless include the Walter Pyramid in any modern tourist’s guidebook right alongside the original, and far less spacious, pyramid in Giza.

The Historical and Architectural Complex of the Kazan Kremlin

Slightly larger than the Walter Pyramid, the Culture and Entertainment Complex and Monument located in the Kazan Kremlin, in the heartland of Russia, tops out at just over 100 feet (30 meters) tall. Architects Gulsine and Victor Tokarev designed it with a glass facade, allowing visitors to enjoy the view of Kazan’s Kremlin, a 500 year old World Heritage Site, and the beautiful Qolşärif Mosque.

Inside, visitors can enjoy two restaurants, six bars, a bowling alley, gym, disco, café, or catch a cultural activity in the 1,100 seat concert hall at the top of the pyramid. The opening of the $44 million structure in 2002 was significant enough that then President Boris Yeltsin showed up. The pyramid design for this building earned the Tokarevs several awards, including the Russian Academy of Fine Arts silver medal and the honorary title of “Architect of the Russian Federation.”

The Palace of Peace and Reconciliation

The Palace of Peace and Reconciliation in Astana, Kazakhstan is the largest pyramid on this list, worthy of a pharaoh. 203 feet (62 meters) tall, it contains 250,000 square feet (23,000 square meters) of space. It was designed by London based Foster + Partners as a site to host the Congress of Leaders of World and Traditional Religions. Construction took two years and cost $85 million.

Foster + Partners chose their design specifically to reflect the character of Kazakhstan itself. The glass encased peak is built of stained glass windows that start in a deep blue tone and rise upward to a golden yellow crescendo, reflecting the colors of the Kazakh flag. Under this glass enclosure sit the representatives of eighteen world religions, a fitting reflection of Kazakhstan’s own religiously diverse population.

Beneath this glowing monument, concrete and steel encase a number of cultural treasures. These include the Museum of National History, the Research Center of World Religions, and the Library of Spiritual Religious Literature. Additional space is provided to host conferences and exhibitions, and centers around a 1,300 seat opera hall.

The pyramid has been with us as one of our oldest structural shapes. Long viewed as an emblem of Old Egypt, and traveling through time as the sturdiest (and only surviving) engineering wonder of the ancient world, this structure has leaped through time and space to take its place as a modern structure found in many nations and continents. If these six architectural works are anything to go by, the pyramid is here to stay.