Save
Why Putin Likes Columns: 21st Century Russia Through the Lens of Architecture
Share
Or
Copy

In August 1932, Stalin, holidaying in Sochi, sent a memo containing his thoughts on the entries for the competition to design the Palace of the Soviets, the never-to-be-built monument to Lenin and center of government. In this memo he selected his preferred design, the colossal wedding cake of a tower topped with a 260-foot (79-meter) high statue of Lenin, designed by Boris Iofan. Just over 80 years later, Sochi again hosted the architectural whims of a powerful Russian leader for the 2014 Sochi Winter Olympics. An oversimplification? Probably. But it’s got nice symmetry to it. 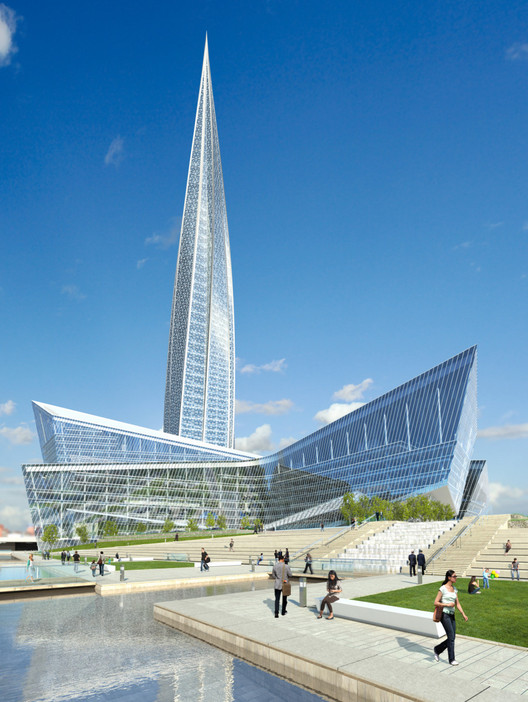 Architecture has always been the best way for ideologies to leave their stamp, and Russia is one of the best places in the world to observe this. The past two centuries have seen Russia transition between not just forms of government (Tsarist autocracy to short-lived Republic, then to the Soviet system and then back to Republic), but also the tone of government, which is just as (if not more) important in influencing the architectural legacy of that period. The Russian Revival styles of the 1880s are unthinkable under the more westernising monarchs of only 30 years earlier, and likewise the grandeur of Stalinist styles made little sense in the Khrushchev thaw.

In fact, according to Sergei Medvedev, this can be formalised into 22 neat periods of Russian culture [1], alternating between what he calls ‘vertical’ culture and ‘horizontal’ culture. The ‘horizontal’ periods are times of relative liberalism, and are characterised by architectural styles that emphasize the horizontal: the rigid lines of neo-classicism, the geometrical shapes of constructivism, and so on. This horizontal aspect of architecture doesn't preclude tall buildings so much as it emphasises spaciousness and the human aspect of architecture; the glass and openness of constructivism. ‘Vertical’ eras, meanwhile, are more repressive, and value grand, vertical architecture; the Gothic and Neo-Byzantine influences of the mid 19th century and of course, Stalinism; the ultimate in verticality.

This is, of course, probably not the most valuable framework through which to properly analyse or understand Russian culture, but it does require an understanding that space is understood in a very different way in Russia. For example, these aspects of architecture could well be extended into a social desire for a more equal society – a horizontal society – or a greater importance placed on the value of hierarchies and stability in their vertical culture.

Looking at the planned Palace of the Soviets, everything about it is designed to draw the eye upwards; the long colonnades have had their pedimented roofs stripped away and replaced with steps that mimic the form of the building, a ziggurat of pillars culminating in an exultant statue of Lenin gesturing upwards. As per Medvedev, this exercise in verticality resembles nothing so much as the Cathedral of Christ the Saviour it replaced, finished in 1883 as the tallest Orthodox Church in the world. Both of these buildings are strongly vertical, not just in design but also philosophy; the hierarchical Russian Orthodox Church of the late 19th Century was a state church that stood in contrast to popular non-conformist spirituality, and the Palace of the Soviets was planned to house not just the representatives of Soviet Russia, but also the organs of government; quite literally the people subordinated to hierarchical government.

It's not as ridiculous as it may sound to suggest a link between these two buildings – Marxist hostility to religion is well-known thanks to the popularity of Marx's 'opiate of the masses' quote, but early Soviet culture is full of this idea of co-opting religion, rather than destroying it entirely. Communist stars were lifted into the place of crosses on churches, for example, and Sergei Eisenstein, the famous revolutionary filmmaker, went so far as to make a film where the communists looting a church are shot in explicitly religious poses, with their heads replacing those of the saints in the now empty icon frames. The message from this is clear enough: the people are the new saints. This is a distinctly anti-hierarchical message, of course, and it's little surprise that this film was quickly suppressed by authorities in the 'vertical' culture of the late 1930s - nor is it surprising that the idea of people as the new saints was itself replaced by portraits of Lenin and Stalin hung in the style of religious icons.

Looking at contemporary Russian architecture and urban design, then, can feel very familiar. The towering Palace of the Soviets was, of course, never built – the foundations eventually became a public swimming pool under Khrushchev (a concept which is distinctly 'horizontal' in design and purpose) but this too has been replaced with a near-direct reconstruction of the Cathedral of Christ the Saviour, consecrated in 2000 and quickly used to canonise the last Tsar, Nicholas II, and his family. Not only does this indicate a trend back towards vertical architecture and culture, it lends weight to the argument of some scholars, for example Sergey Selyanov [2], who have advanced the idea that the Russian consciousness is based on a religious mission and a unique place in the world, which sometimes falls prey to the temptation of those in power to create an imperial state: Peter the Great and the European Russia of the 18th and early 19th centuries incorporated the Orthodox Church, which was considered the last remaining 'true' Church after the fall of the Byzantine Orthodox Church and the state; and the Soviet Union at first co-opted faith and then attempted to transcend it entirely in favour of a belief in a bright new socialist future. The faith of the people transfers from the national mission to faith in the state. This ties in nicely with the idea of repressive and liberal architecture, and it fits too with events in Russia whilst Putin has been in power.

With diplomatic crises in the Middle East and Eastern Europe and sanctions driving a wedge between the West and Russia, and recent laws enacted for the preservation of “Traditional Family Values” as well as the dramatic improvement in relations between the Russian Orthodox Church and the Kremlin (with 23,000 Churches being reconstructed under Putin's watch) events seem to indicate that Putin could well be attempting to resurrect Russia as a unique cultural identity with a national mission. As a result, we have Sochi’s revival architecture, using the pastel hues of Peterine Baroque and Empire style roofs as a visual statement of that mission. In parallel, we have the supertall skyscrapers in the Moscow International Business Centre and elsewhere in developed Russia, drawing the eye up their facades and pointing towards the sky. This is of course taking Medvedev's idea to extreme heights, but as part of other trends it could indicate a refocusing on the grand and imposing vertical culture, as well as playing a part in the wider debate around public space in modern developments. On top of this, rapid development has attracted criticism for remaking the face of Moscow. This is not the first time that attempts have been made to remake Moscow, and in itself this is not necessarily a bad thing; many cities have been totally reconstructed. But it does speak of a renewed sense of national self, as well as strong central authority.

The replacement of liberal constructivism - all glass walls and transparency, broken down barriers and open spaces - with Stalinism wasn’t pure ideology; frankly many of the constructivist buildings weren’t very well designed for what they were, but it did herald a turn in the direction of Russia. Is there a similar turn observable in Russian architecture now?