Chile may soon be home to the only Antoni Gaudí-designed building located outside of Spain. At a recent press conference, Chilean President Michelle Bachelet confirmed government funding for the construction of the Gaudí Cultural and Spiritual Center in the city of Rancagua, which will include a chapel designed by the Catalán architect.

The project originated in 1922 through a series of letters exchanged between Gaudí and Chilean Franciscan Friar Angélico Aranda, who asked Gaudí to design a chapel for Chile. “I wish to implement an original work, very original, and I thought of you,” wrote Aranda to Gaudí, who by then was immersed in constructing his masterpiece, La Sagrada Familia. Since 1996, Chile’s Corporación Gaudí de Triana has been working to make the design resulting from this conversation a reality.

Learn more about this project after the break. 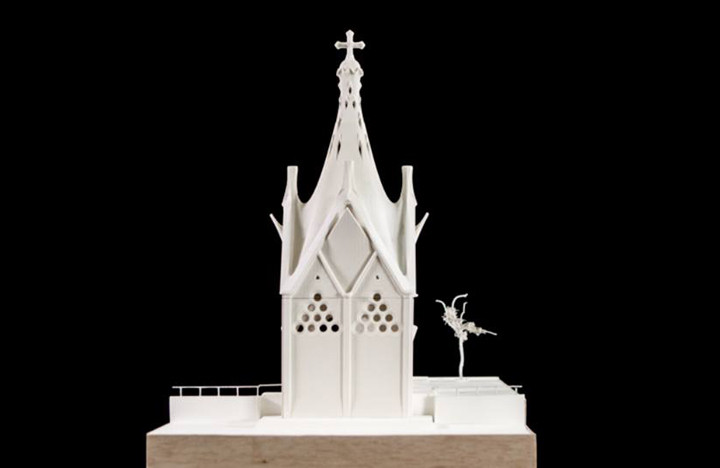 Aranda had met Gaudí in Barcelona in 1909, and years later would write the architect asking him to design a chapel “as only you know how to do,” specifically a “porziuncola” or “place of forgiveness” dedicated to Saint Mary of the Angels.

“This project would serve as a spiritual fellowship between Spain and America,” Gaudí responded, just four years before his death. Gaudí offered Aranda the design of a chapel originally planned for the back section of the Sagrada Familia’s apse.

According to Christian Matzner, the architect now in charge of the project in Chile, Gaudí's design dates back to 1915 and was inspired by Spanish architect Luis Bonifacio’s work inside the Girona cathedral in Spain.

In one of his letters Gaudí included a croquis of the chapel’s original location in the Sagrada Familia, writing:

“I’m interested in some preliminary notes, like: location and site conditions: if the place where it is going to be located […] is an open area or if it will be located next to other buildings, and in that case what they are like. […] Another interesting note would be to know the intensity of the prevailing winds and if there are frequent cyclones.”

The current project is 1,250m2 overall, including both the porziuncola and the underground spaces. The chapel will stretch 30 meters above its 10 square meter base, and inside, the chapel will have a central altar and a subterranean crypt where the remains of Aranda will rest.

With regards to the design, Matzner told press that it would form a “hyperboloid and symbolically represent the Assumption of the Virgin, where she rests in her bed and the angels, located on top of the pediment, shelter her during the ascension.”

With a budget of more than $7 million, the Gaudí Cultural and Spirtual Center will be 10,858m2, including the chapel, a cultural center, an arts schools, a cafeteria and a contemplation space open to all religions. Work on the project is expected to begin during the second half of 2015, with the project’s inauguration planned for 2017.