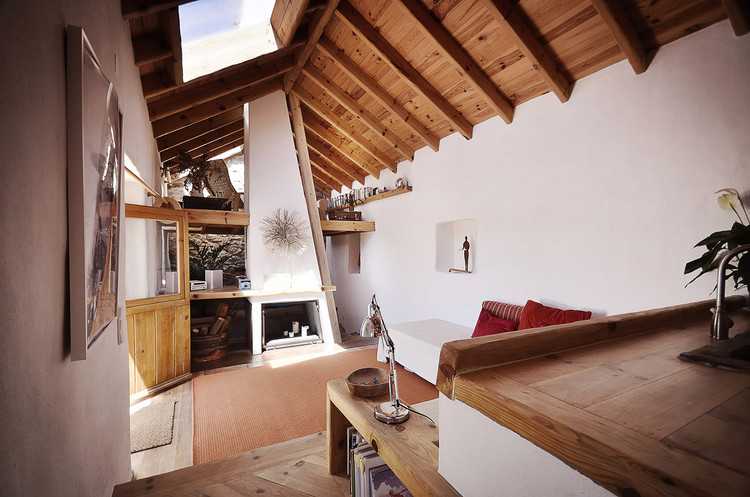 Text description provided by the architects. The Calling

In the heart of the, south and Atlantic facing, village of Malveira da Serra, in the base of Sintra’s hillside, was where the Artist/Architect Pedro Quintela developed this project.

In 2008, following countless visits to the site, that awakened a profound calling in the Architect. He decided to ask a neighbour who owned property. The name and the nearby place where the owners lived were revealed by a neighbour. That same day, the architect went to referred village. In one of its streets, he only came across one person, who, surprisingly, was precisely the person he was seeking!

The Architect demonstrated his interest in the ruin, he explained the type of interventions he took upon himself and proposed purchasing, the, until then named, "pile of rocks", the former owners were perplexed by his enthusiasm.

The cleaning phase was crucial for the development of the site. The Architect was always present and followed every step of his team of five workers. The process of meticulously cleaning the ruin, gave the architect, not only, the chance to be acquainted with it more intimately, through the revelation of every nook and cranny, but also the opportunity to discover past relics, that he reintroduced with a new life in the new house. Despite being entirely enthused in the site’s reminiscing elements, only the original stone walls prevailed.

The Architect’s unique way of being in the profession, based on the belief that the success of his built work depends on his utmost availability to personally presence the site’s development in-loco, leads him to move to a neighbouring house. Living in the site’s vicinity (as he did until the works concluded) enables the Architect to integrate and become familiar with the villager’s modus vivendi, and in addition to creating, what he considers, key conditions for nourishing site transformation, that allows detailed harmony to reign as a whole.

In order to respect and preserve the identity of the original construction, the ruin’s regeneration, not only used local materials, such as pine and granite from Sintra, but furthermore reused the site’s materials ubiquitously. As if rebuilding a puzzle, the Architect used existing materials and used them in new-found purposes in new places.

Works spanned during two years, initially with a workforce of five. As finer detailing required higher demand, attention and skillfulness, the number of collaborators was reduced. Working simply with two workers enabled the establishment of an exceptionally special understanding, which instilled discipline and pride in the creation process.

The architect’s work method is, as he assures us, intuitive. His real clients are the sites themselves. It is with them that he spends most of his time, “hearing them”, carefully. They “speak softly” to him and tell him how they want to be rebuilt. The Architect takes on the role of “spokesman”, thus assumes as core onus knowing how to “listen” and to create in the unique place, what it may, or not, request. If “communication” is established, he moves to practice, by means of sketches, cardboard models and the fundamental and ongoing dialogue with his collaborators, considered vital to guarantee the work fluidity and minimize the scope errors.

Though his holistic concept, the Architect worked disorganized energies, using, assimilating and arranging them to form a specific structucture with identity, creating beauty, truth and value. The Architect firmly believes in Architecture as an evolution process (as occurs in nature), which is interconnected in three phases: Adaptation (immediate responses of the place); Transformation (reflection) and Crystallization (Creation). He believes that, only going through this process, can he consider the work to be authentic, thus respecting "The Spirit of the Place."

In the particular case of this intervention, one may say that the once small, confused and very fragmented “hug shaped house” open its arms to transform itself into the flowing, large, bright, yet cosy space, where everything is sensed to belong...exactly where it is!