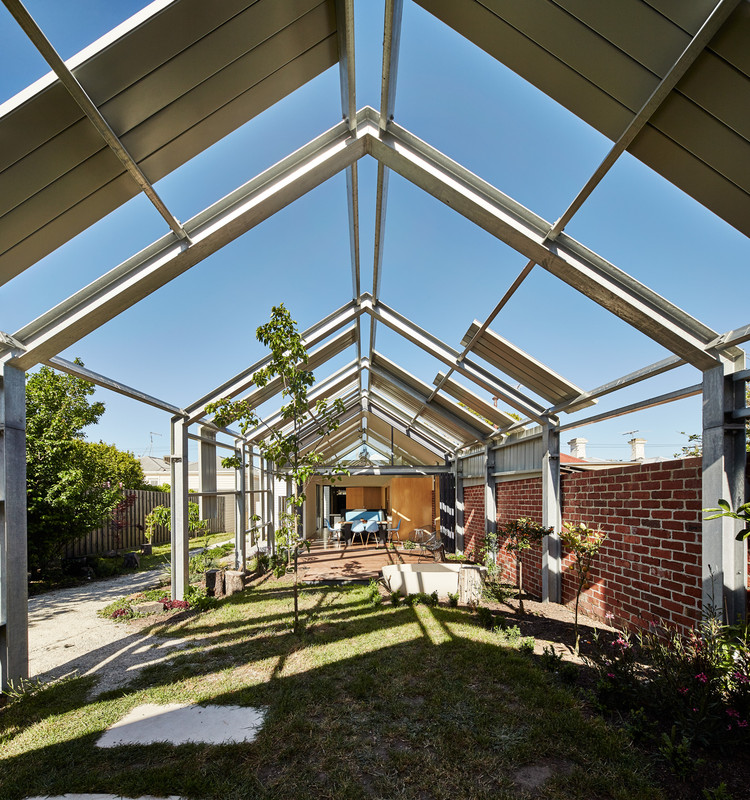 Text description provided by the architects. What?

Cut Paw Paw is a renovation and extension to a double fronted weatherboard home in Seddon, Victoria, Australia.

Cut Paw Paw is the name of the parish in which the house presides, and a name that theowners liked very much. It’s a weird name, hence we like it too.

Construction sites are fascinating and often very beautiful. When wandering the street and stumbling upon an anonymous house in construction we all get excited by the possibilities. We all imagine what the finished building could be like. The site holds so much promise when there is nothing more than a timber or steel frame. It is a jungle gym, a relic, and a skeleton full of play and imagination. Often it is when a building is at its most beautiful.

All too soon the excitement, the imagination and the potential comes crashing down as the reality of the finished building becomes apparent. When the anonymous house is roofed, clad and finished it is often a disappointment as the banality of the McMansion emerges. The beautiful skeleton that held such potential and required such imagination has been buried beneath the ordinary, the obvious and the banal. The home will not again be interesting until it eventually begins to crumble and decay.

Cut Paw Paw is a structure that is deliberately incomplete. Derek and Michelle, the owners, asked that the house be “ridiculously inside-out”. To accomplish this we not only employed tested and successful ideas such as sliding walls, bifold doors and decks, we also left the building incomplete. The central space, between the dining area and the studio, is an unclad frame within and surrounded by garden. It is both inside and outside. It is both a new building and an old ruin. It is both garden and home.

Like all of our building, sustainability is at the core of Cut Paw Paw. Rather than simply extruding the existing structure we have run the new form along the southern boundary so that it is soaked in sunlight. The openings and windows have been designed to optimise passive solar gain, thereby drastically reducing demands on mechanical heating and cooling. All windows are double glazed. White roofs drastically reduce urban heat sink and demands on air conditioning. We have a pond on the face of the larges north facing opening. While providing a home for fish and plants, the pond also serve as a mechanism to passively cool the house through natural evaporative cooling. Water tanks and solar panels have their place as they do on all of our projects. High performance insulation is everywhere, even in the walls of the original house.