During this year’s World Architecture Festival (WAF) held in Singapore, we had the chance to talk with keynote speaker Moshe Safdie. Standing inside the Marina Bay Sands, a massive mixed-use project by Safdie Architects and an example of the firm’s ongoing research on density, Safdie talked to us about Asia's urban environment and the challenges of working there. As the world's growth is happening in dense areas, this subject is utterly important, and Safdie has proven that these kind of mega-urbanism projects can be functionally integrated into the city. “Working in Asia at the intensity and scale that we do has been a paradigm shift for our practice because much of our work in the United States and Israel and elsewhere in recent years has been focused on institutions - on libraries, museums, airports - here we are involved with urban place, mixed-use mostly, extremely dense, working for the private sector, and having to reconcile the market forces with the architectural environmental demands, which is no mean task,” he said. 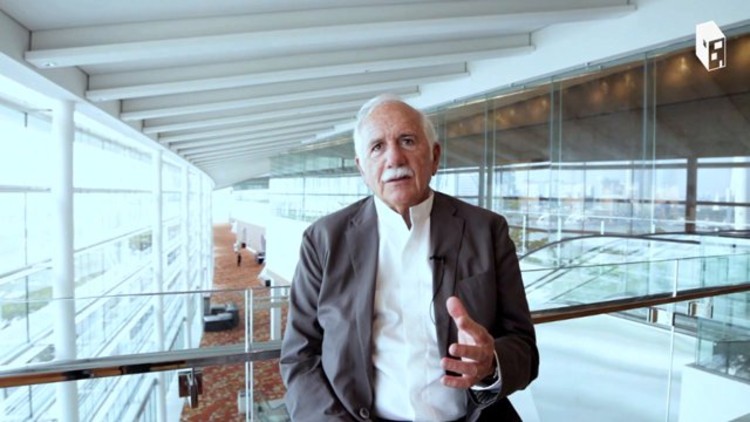 Safdie also told us about the genesis of Habitat 67 and the research his studio’s research fellowship program has conducted on how to take “the ideas of Habitat forward to this period.” The studio’s research has produced a series of theoretical “protype typologies” that have since been applied to several of Safdie Architects’ projects across Asia, including the Sky Habitat in Singapore.

A continuation of his master’s thesis in architecture at McGill University, Safdie explains that the idea for Habitat 67 originated when he was selected through a program by the Canadian government to attend a trip to “look at housing on the North American continent” in 1959. “I discovered public housing highrise buildings that nobody wanted to live in, that were the center of violence and unhappiness… So I thought for my thesis I would try and reinvent the apartment building,” Safdie explains.

Watch the full interview with Safdie to learn more about his research on density, Habitat 67 and the role of architects in society, and make sure you check out our past coverage below.

TED Talk: How to Reinvent the Apartment Building / Moshe Safdie