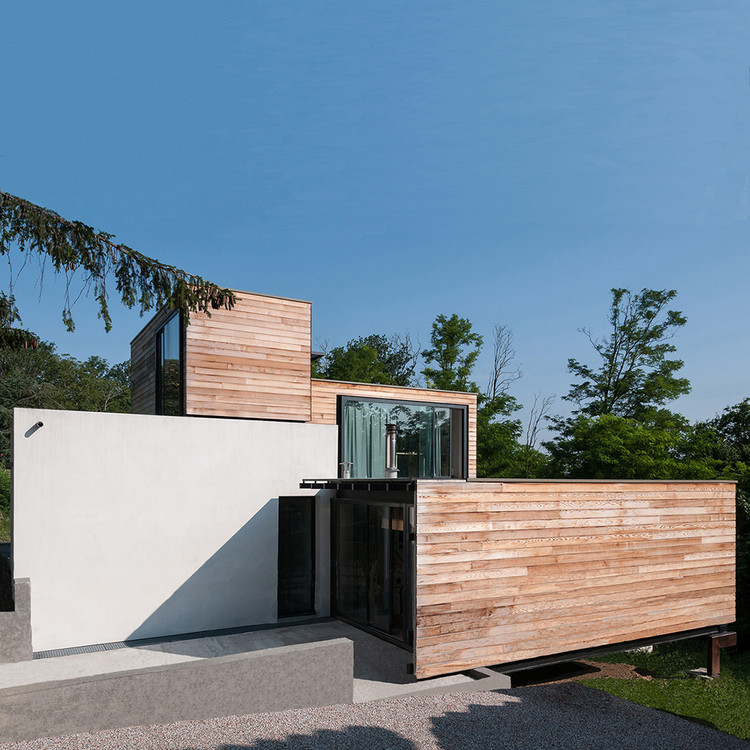 Text description provided by the architects. A couple and their child choose a sloping plot of land on which to build their house and raise their family. Their wishes stimulate two ways of living and guide three worlds: the parents’, the child’s, and a third shared one.

There is an initial desire to be buried underground expressing the attraction of living in the secret of a subterranean base, Pegasus (referring to a US Comic of the 1980s). There is always a seething quality of underground life, a whole social life which runs through the world. The earth here encompasses the individual and describes an immersion in an incalculable mass.

The other desire displays a suspension of the flesh in the sky. Air and light become the agents of a continuous event: something is in transition, a delicate atmosphere fills the motionless body, the souls drifts in a melancholy way without  changing with the matter. The idea of disappearance appears in the perception of these two desires inscribed on their bodies: disappearance in matter and disappearance of matter in order to go on living come what may.

These two desires express a novel power play: one issues from a force pushing towards the depths when an opposite vertical force seeks to occupy the atmosphere. Architecture takes these libidinal collisions as its object.

By occupying chaos with an initial temporal draft, the first connections are created at the same time as the special features defined organs as yet un-formed (functional intentions).If the organs determine the connections, the connection brings on nature and organic form.

In this way, we start to get close to making organic, Frank Lloyd Wright architecture: genetic growth determined by distinctive features.

White volumes of brickwork emerge from the earth. Buried organs (living rooms) are contorted in the economy of the masonry.  In the bowels of the earth, the rooms are lengthened and become contorted. Stairways will negotiate the slightest topographical ups and downs to link everything together, while the organs slipping between the masses cling on to these distributive innards. This organic whole is thoroughly watertight, sufficient unto itself, but ready to support other things. The downward thrust of the organs means that they have to be pierced to look for that light which suspends darkness. At the same time, the ears bathe in an acoustic magma, an environment in which intensities of sound and timbre’d colours become blurred. The second organic set is placed on the submerged part and against the white saliences above ground. Its composition is subordinate: the international dimension of the shipping container recycled as a dwelling unit follows a logic of stacking determined by its particular structure: the eight structural corners govern the combination of inhabitable units.Self-supporting, the containers are set on the subterranean base; indestructible, they are broken up to obtain large openings, and the presence of matter fades. This effect of disappearance is increased by dissociating different layers of skins which form the envelope: the steel structure of the containers, then the wooden cladding, then the suspended frames of the black wooden structures appear by letting each one co-exist. If using containers expresses an ecological wish, this recycling becomes a poetic recycling: the use of the container goes beyond its physical and functional properties to give a particular perceptive consistency.The envelope and the matter lose their consistency, and bodies float indefinitely in the same way.

The Pegasus House functions like an interface between earth and sky with its two organic ensembles. They brush against one another and with each shift from one arrangement to the other, distinctive physical features are displayed, and atmospheres follow one another on the basis of their connections. By accident, a new unpredictable thing happens between the two systems: a diagonal. It punctuates events based on a synthetic method of decision: a loop of circulation is imposed, and organizes the house’s different rooms. This diagonal, the “musicality” of the  Pegasus House, is a force line which influences the different arrangements and their frequencies based on the contingent forces that it encounters. This common denominator has no form, just a distributive and rhythmic function, a sort of functional ubiquity. Stairway for one, corridor for the other, sometimes becoming a room crossed.

There is a kind of urgency to live in this house. Pegasus House with its unequal degrees of permeability to the outside experiments with this form of living urgency: in the fleeting instant of what happens, imperceptible developments are tried out based on variable speeds and rhythms; the softest encounters the hardest, the slowest the most nervous. In the oblivion of the new, in search of abstract impressions suspended in the hollow of the body, Pegasus House becomes the occurrence of a multiple “taking place”, that of the event duplicating the great policy of the sign with its meaning.