Adolf Loos (December 10, 1870 – August 23, 1933) was one of the most influential European architects of the late 19th century and is often noted for his literary discourse that foreshadowed the foundations of the entire modernist movement. As an architect, his influence is primarily limited to major works in what is now Austria and the Czech Republic, but as a writer he had a major impact on the development of 20th century architecture, producing a series of controversial essays that elaborated on his own architectural style by decrying ornament and a range of social ills. Adolf Loos’s minimalist attitudes are reflected in the works of Le Corbusier, Mies van der Rohe, and many other modernists and led to a fundamental shift in the way architects perceived ornamentation.

Born in Brünn in the Austro-Hungarian Empire (now Brno, Czech Republic) in 1870, Loos studied at the Royal and Imperial State Technical College in Reichenberg (now Liberec) until he left school to serve in the army for two years. Following this, he attended the College of Technology in Dresden and later moved to the United States for three years where he worked as a mason, a floor-layer, and a dish-washer. Eventually, Loos obtained a job working with architect Karl Mayreder in Vienna before establishing his own practice in 1897.

Through his writings, Loos desired to establish an intelligent method for designing buildings supported by pragmatic reasoning. His opposition to ornament extended to anything that could not be justified for its rational function. As a result, his buildings were often composed of pure forms and were justified by their economic practicality and utilitarian qualities. His theories on ornamentation were most succinctly revealed in an essay entitled Ornament and Crime in which he states “The urge to ornament oneself and everything within reach is the ancestor of pictorial art. It is the baby talk of painting... the evolution of culture marches with the elimination of ornament from useful objects.” Throughout the essay, he explored the notion that ornament results in the undue obsolescence of everyday objects, decrying the use of laborers and therefore financial capital for producing decorative details in contemporary buildings, and ultimately concluding that ornament was a sign of degeneracy.

His writings and architectural works sparked widespread furore, as they stood in sharp contrast to traditional Viennese design and more recent styles following the Vienna Secession and the Wiener Werkstätte. In writing a comparison between one of his most notable works and Josef Hoffman’s Apollo Candle Factory Shop, Loos alludes to the timeless qualities of architecture devoid of ornamentation: “The Cafe Museum, however, designed according to my principles and opened on the same date as the candle shop, will not become unusable until the glue no longer holds the furnishings together.”

Other notable buildings by Loos include his 1910 Goldman & Salatsch Building, overlooking Michaelerplatz, Vienna, as well as numerous private residences such as the Villa Müller in Prague. Many of his works, although controversial, revealed the roots of the modernist movement through their clean white walls and pure forms. Le Corbusier himself considered Loos’ Ornament and Crime "an Homeric cleansing" of architecture, revealing the magnitude of his impact on modernist ideology.

Check out the links below to find read some of Adolf Loos' writings and to find out more about the unrealized design that could have changed the course of architecture history:

In what was arguably the first highly-publicized architecture competition of modern times... Loos presaged a life for architecture after modernism. 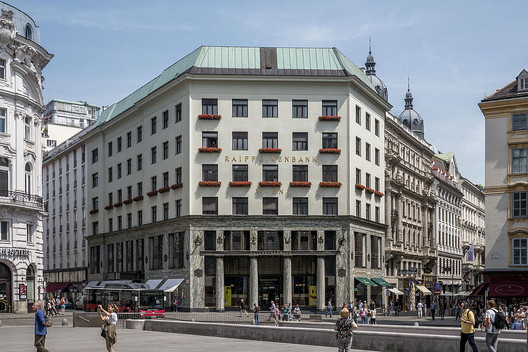