"We designed this concept for Singapore," says SPARK Director Stephen Pimbley, "but there is the potential for it to be applied in any location that would support the growth of leafy green vegetables on building facades and rooftops." He continues, "We are keen to see this project materialise at some point in the future. The concept is a realizable solution to real and pressing problems faced by many of the world’s growing cities."

Read on to learn more about the concept. 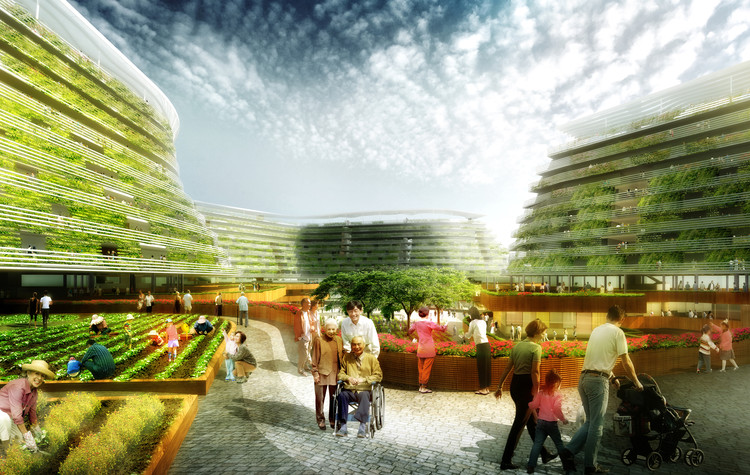 From the architect: The Problem with Aging

The Problem with Food Security

Singapore is one of just seven fully urbanized places – a city state without a hinterland. In the 1960s, 20,000 farms still occupied about a quarter of Singapore’s land area and produced vegetables, fruits, rubber, tobacco, spices and orchids. Pigs and poultry were reared. Farmers have since made way for infrastructure projects, housing and industry.

The Singapore Government’s Agri-food and Veterinary Authority (AVA) has in place strategies for the diversification of food sources and (given the lack of space for traditional farmland) the boosting of the local production of leafy vegetables, fish and eggs through intensive agricultural technology.

The Living Situation of Singapore's Seniors

Chronic diseases are common among older Singaporeans, but they are fit and mobile. The most common medical conditions reported by seniors aged 55+ are high blood pressure and cholesterol, diabetes and arthritis. Outpatient treatment is common.

The Singapore Government's Strategy for an Aging Population

Singapore’s Ministerial Committee on Aging (MCA) was established in 2007 to coordinate the Government’s response to an aging population. It has a vision of "Successful Aging," to be achieved through the enhancement of participation, health and security for seniors. Its four key thrusts are:

Home Farm adapts a simple aquaponic system inspired by that which has been successfully used in Singapore by rooftop farming initiative ComCrop using off-the-shelf components. At Home Farm, aquaponics have been adapted for use on the building façade. Soil-based farming is proposed for linear planting beds at the highest levels, as well as the rooftops of facilities buildings.

Jobs for seniors at Home Farm could include planting, harvesting, sorting, packing, tours, sales on site, delivery, cleaning, and so on. Possibilities for the remuneration of Home Farm’s resident workers could include: payment of salary, offsetting rental or utilities bills, offsetting healthcare costs at the on-site clinic, or free produce.

Home Farm is imagined as a private rather than public entity, but one that is within the reach of seniors who encounter financial stress. The architecture has been conceived for economic construction using simple materials and modular parts. The concept offers multi-dimensional benefits related to economics, food security and quality, social engagement, health, sustainability, place making, and healthcare provision.