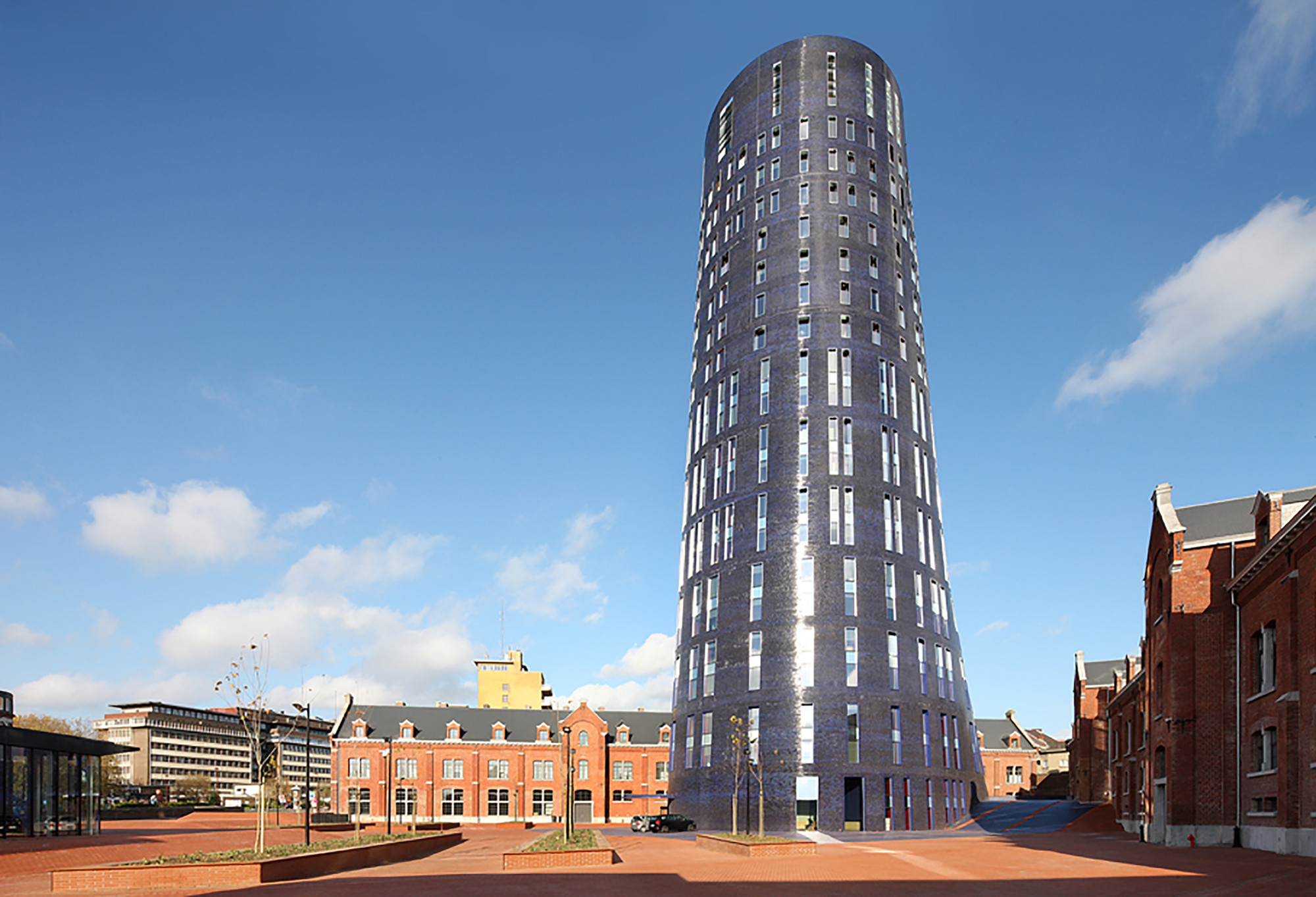 It is both strange and somehow stimulating to combine a police headquarters and a dance company on the same site. Urban districts move, cities change, we are in an era of transformation. In Charleroi we have built a new police headquarters and extended the Charleroi Danses buildings. These transformations were an opportunity to create a new urban space that can be reached from the street and that we wanted to be active and bustling. This is why a large brasserie was created at its heart, a place where users of the site and its neighbours can meet.

The Charleroi police headquarters has been installed in a blue tower building which is a reminder of the dark blue colours of the police force. The idea was to create a city scale landmark which is not too high, as a sort of dialogue with the City Hal belfry, and as a message stating that the police force services are open to all at all times. We installed the lobby in the extension to Charleroi Danses, it is a large red nomad tent that reminds of the lightness of dancers. Its vast terrace visible from the public area also underlines the permanence of this internationally reputed institution. The unexpected combination of the new Charleroi police headquarters, of Charleroi Danses, of a brasserie and a public square should create new urban poetry in the upper city.

A Complex and Historical Site

The main feature of the site is a large number of 19th century buildings : the Defeld cavalry barracks until now occupied by the gendarmerie, and its old cavalry training ring used by Charleroi Danses, the Choreography Centre for the Fédération Wallonie-Bruxelles. The programme included the rehabilitation of the old gendarmerie barracks, the grouping together and merger of the police force and the gendarmerie, as well as the extension of Charleroi Danses. An additional programme was added to this : the creation of exhibition rooms for the Charleroi Fine Arts Museum.

The Ateliers Jean Nouvel and MDW architecture project was chosen in 2011 as the result of an international competition. Its goal is to create a public and agreeable image of the police while giving the city a new urban landmark. The basis of the work led to keeping and restoring the two wings of the old cavalry barracks and building a vertical building on the site that was freed. This building merges into the urban landscape of the upper city and creates a dialogue with the City Hall belfry, becoming a new symbol on the city skyline. This verticality made it possible to create a wide public square open to the city.

The users of the Police headquarters, of Charleroi Danses and visitors to the museum will increase the surprising diversity of the area in their comings and goings; they will cross each others’ paths in the new public square and eat in the new brasserie which is the place where the Police and Dance encounter each other.

Two of the old cavalry buildings, representing over two thirds of the existing buildings, have been kept and renovated to a low energy standard. The existing space has not been significantly changed, the refurbishment of these zones therefore highlights and preserves such spaces as the generous layout or the high ceilings. To the North (D wing) and the East (E wing) of the site the two long buildings built in typical regional brick architecture house part of the police offices. Associated services (cafeteria, event area) and the Fine Arts Museum exhibition rooms are located in the wider areas of the old stables that have been preserved on the ground floor.

Since the renovation of these two buildings was not sufficient to meet the requirements of the programme a third building was imagined : A 75 metre high cylindrical, elliptical tower, a new urban landmark echoing the Charleroi City Hall belfry. The tower, of which the shape is intended to be welcoming, is encased in blue brick, a reminder of the colours of the police force. Composed of a reinforced concrete structure and a wood facade covered in brick, it meets the criteria for a passive building as defined by the authorities.

From the tower lobby, which is the only way in through its large volumes, staff and visitors walk to the different departments using a « link tunnel» architecture connecting the three buildings. Access to the car parks, the detention centre and the logistics centre is via the ramp at the rear of the site in rue Spinois. In the new tower the design is as flexible as possible, allowing to modulate the space depending on needs and changes over time : each level can easily switch uses in order to favour relations between different police departments.

There is a three level underground car park beneath the tower, but also the detention area, the archives and other storage areas. To the rear of the ground floor a debriefing room has been installed and on the first floor there is an auditorium for lectures and conferences. The third level is reserved for premises that require a technical service floor : dispatching, It services, crisis centre. It is occupied night and day and is the true heart of the building. The highest level houses a prestige meeting room with a panoramic view over the city.

In the old parts the qualities of the existing areas have been preserved : very wide corridors with offices arranged along only one side. The offices are modular within the existing load bearing wall structures.

Cloakrooms have been installed on two levels in the cavalry barracks E wing. The cafeteria is in D wing and occupies a generous area in one of the two old stables.

The new architecture creates a new geography with its heart marked by a large public square directly accessed from Boulevard Mayence. The North and East sides are composed of the old buildings, the street runs along the West side and Charleroi Danses is on the South side. Behind the two renovated buildings a space between the buildings and the beautiful brick surrounding wall has been created. This space is used for vehicle access, deliveries and access to the car parks to the rear of the site and frees up the public square from the constraints of the old parade ground.

This freely accessible new square is an area which each and everyone can appropriate. Only police cars and bicycles are allowed to cross it in order to provide a maximum of freedom for pedestrians. All can come here attracted by its many functions, from the brasserie at the heart of the square to the Fine Arts Museum exhibition rooms in one of the renovated wings which will shortly be installed by the City. This new square is paved in red brick, criss-crossed with blue bricks around the tower in order to connect the new Police headquarters to the historical buildings.

The old cavalry training ring called « Les Écuries » houses the Choreography centre for the Fédération Wallonie-Bruxelles Charleroi Danses. This space is inhabited by a « village » atmosphere created by a succession of small brick buildings linked by interior paths. The human dimension and the « village » atmosphere that encourages conviviality have been kept and strengthened by new small buildings similar to the existing ones and spread along the inner pathways. The extension of Charleroi Danses includes the design of an atrium providing easier access and a new and even more convivial lobby, there are three levels of dance studios and housing for the resident artists. The main entrance, which is flanked by two large bays and designed by Lhoas and Lhoas brothers the renowned Belgian architects, has been kept and maintained on the Boulevard Mayence. This space is now visible from the street and has street level access topped by an atrium that can also be seen from the street. At the reception area a staircase and elevators lead to the overhanging level that houses the access to the Charleroi Danses hall and offices as well as to the upper lobby level.

The large dance studio has been kept to a size close to that of the existing stage. It is behind a brick wall that runs along the street to the place de la police and benefits from natural daylight through a large bay of east facing windows. It has access from reception, the atrium and from the boxes-cloakrooms. A new access to the show theatre has been created at the upper balcony level : it allows the public to discover the entire space at a glance. A small and light metal construction with 2.80 metre high windows, the lobby sits like a nomad tent on the terrace formed by the slab of the big dance studio. It is covered by a fabric on which the Charleroi Danses logo has been printed like a modern signal. The terrace is open on three sides : the street, the « village » and the square. It thus plays on the ambiguity of the closeness of the police and the dancers. The mobile bar can be installed in the lobby or on the terrace.

The two small dance studios have been built on the rear part of the site in a separate building that is nevertheless a part of the « village ». It has a twin sloping roof. Natural light pours in through large bays of windows in its facades. It is all covered by a micro-perforated fabric on which a photomontage of shows produced by Charleroi Danses has been printed to remind of the creative function of this area. The cloakrooms, which have been installed in the basement, connect the ground floor « large studio » to the basement « small studios » by a direct staircase. Recent buildings were demolished along the surrounding wall, between the police lot and the existing older building that houses the prop workshop. Independent and protected housing for resident artists has been created in this cleared area. It has been built along the same lines as the existing buildings: a small brick and glass building.

At the meeting point between the Police and Dance entities, a new brasserie will be installed in the extension to the surrounding wall. Its ceiling, which will be visible from the street, will be a modern and poetical photomontage on the theme of encounters. This friendly place will allow spectators and the many users of the neighbouring buildings - offices, civil services, schools, etc. - to take their meals and bring new life to the area. 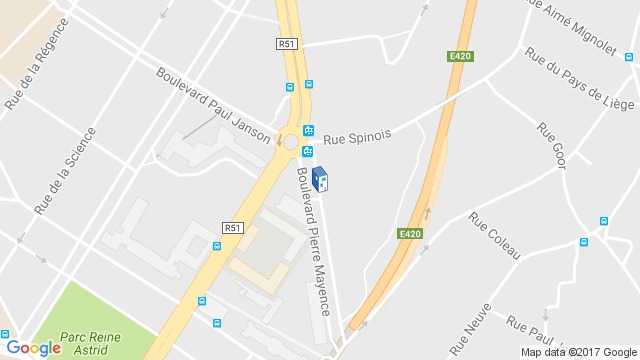 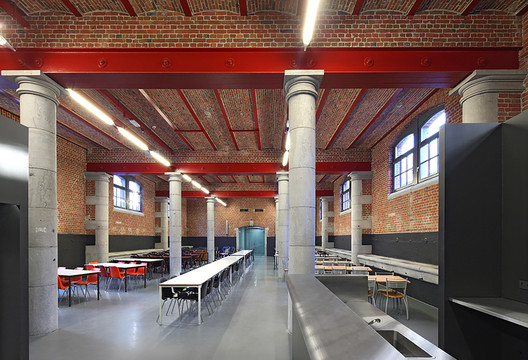 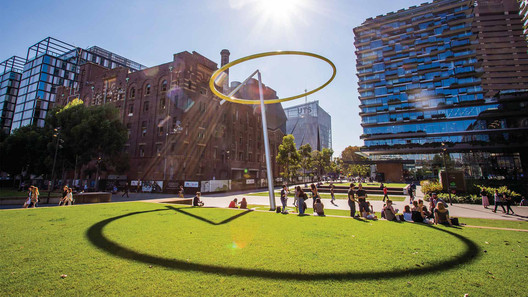