Olympic host cities around the world are increasingly facing issues of post-event sustainability, with many stadiums and arenas falling into disuse and dilapidation mere months after the games. The soaring costs associated with constructing Olympic facilities have plagued organizers for decades, resulting in an all-time low number of bids from host cities for the 2022 Winter Olympics, according to the International Olympic Committee. Yaohua Wang is a recent architecture graduate of the Harvard University Graduate School of Design and a native of China - where facilities constructed for the 2008 Beijing Olympics are slowly being converted to new post-Olympic uses, typified by the transformation of the Watercube into the city's newest waterpark. Wang's thesis project, Salvaged Stadium, delves into the afterlife of Olympic facilities, providing a solution for arena reuse with potential for application worldwide. 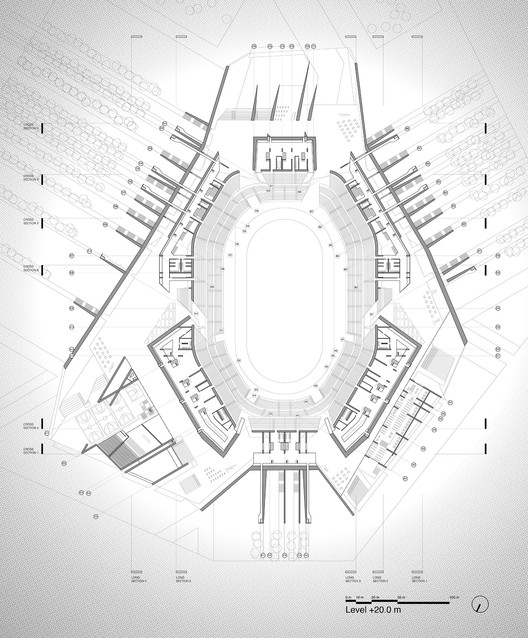 Salvaged Stadium answers a programmatic question facing post-Olympic cities around the world: what can be done with the facilities when the games are done? Based on his understanding of Chinese infrastructural issues, Wang developed a stadium that could be converted into a school for migrant workers upon the completion of the games. In Wang's design, the stadium remains functional while the underbelly of the stadium is gutted to eliminate practice fields, spectator halls and food vendors in favour of classrooms, flexible learning spaces, and student commons. The reuse capitalizes on vast unused spaces while retaining the original function of the stadium, providing longevity to the facility while solving a long term need for education of China's growing migrant worker population.

The decision to transform the underside of the stadium into educational spaces was crucial to the design of the structure. "I don’t think I’m proposing a model of reuse, but rather an allegory. It’s an allegory about how could architects use architecture as a tool to ground their “utopian” vision, instead of having a vision then wait for some other agencies to rescue," said Wang. He began by identifying under-utilized spaces with potential for development: "Spatially, the Olympic Stadium is basically a bowl surrounded by circulation levels stacked like pancakes," he said. This stacked open plan allows for easy conversion of public spaces into educational components, satisfying the programs for a school and major athletic facility simultaneously.

According to Wang, the most ineffective use of stadium space is the practice field which is often adjacent to or across the street from the main complex, adding significant square footage to the building's property. In Chinese cities, space is at an ever-increasing premium, leading Wang to incorporate a semi-permanent practice field into its ground level concourse that would be removed after the Olympic games. Removal of the practice field carves out new space to be used by the school while retaining the function of the stadium's central arena.

A desire to cure "architectural latency" - first developed in his undergraduate project at SCIarc - drove Wang to develop the modified stadium which provided a solution to migrant workers: "because they are not registered as permanent residents, they are outsiders of the government's education system," says Wang. National stadiums rely on government funding to operate, yet remain empty a majority of the time. Wang's program highlights cost efficiencies found by blending government funded programs in education and athletics into the same facility, capitalizing on inevitable spatial crossover created by placing both institutions under the same roof. The school's unique model is designed to appeal to Chinese officials struggling with the necessity to build athletic facilities while neglecting rural and urban populations of migrant workers' children.

Salvaged Stadium was designed with the potential to be emulated around the world, solving space shortages while addressing social issues in countries with dense urban populations. This idea stems from Wang's belief that an architect should operate holistically, healing the city through design. "There is an old Chinese phrase 'to be the fish on someone's chopping block.' It is used to describe a passive situation you found yourself in. Unfortunately, in front of the people with real power, architects are often in this kind of situation. Be aware of your situation, and then find a way to make a comeback," says Wang. Salvaged Stadium is Wang's urban comeback, breathing new life into the tired Olympic stadium and creating a space capable of uniting communities for sport and education.