Save
Mario Palanti: Architect of Rome's Skyscraper That Never Was
Share
Or
Copy

Adam Nathaniel Furman, architect and winner of this year's Blueprint Award for Design Innovation, is currently undertaking his tenure as the recipient of the 2014/15 Rome Prize for Architecture at the British School at Rome. His ongoing project, entitled The Roman Singularity, seeks to explore and celebrate Rome as "the contemporary city par-excellence" - "an urban version of the internet, a place where the analogical-whole history of society, architecture, politics, literature and art coalesce into a space so intense and delimited that they collapse under the enormity of their own mass into a singularity of human endeavour."

In this short essay inspired by the work of Dietrich C Neumann, an architectural historian at Brown University (Providence, RI USA), Furman examines what would have been "the tallest building in the world [...] housing Italy’s new Parliament, lecture halls, meeting rooms, a hotel, library, enormous sports facilities, lighthouse, clock, astronomical observatory, telegraph and telephone stations, [reflecting] sunlight off its acres and acres of white Carrara marble." In the shadow of Italian Fascism, Mario Palanti saw an opportunity to transform the skyline of the Italian capital by pandering to the egotistical ambitions of a dictator. Ultimately the extent of his vision was matched only by his failure.

This text is based on the story of Mario Palanti and the Mole Littoria, uncovered in Dietrich C Neumann's essay “A Skyscraper for Mussolini,” in issue 68 of the AA Files. [1]

Dictators attract conceited architects. It is an affinity as basic as that between a baby and its mother’s teat.

The architects must however engage in elaborate mating rituals, and overcome numerous rivals, before they may couple with their man. A dictator must be expertly serenaded. One’s genius must be skilfully strutted. Visionary designs, grand ideas, glorious urban transformations must be paraded in competitions, pamphlets, publications, exhibitions.

Sycophantic descriptions are appended to utopian renderings. Unsolicited projects are designed and presented as votive offerings to the greatness of the tyrant’s might and ideology.

“When the fatherland called its children, I came to serve – From Argentina.”

Mario Palanti, a successful architect practicing in Buenos Aires, author of the two tallest buildings in the Southern Americas, an Italian expatriate, a dreamer and prolific producer of impossibly megalomaniacal schemes, a superhumanly confident character, spotted in Benito Mussonlini someone who could lift his phantasms off the page and onto the skyline.

In Rome. In the Eternal City. Not Buenos Aires, not Montevideo. No more would he slave over masterpieces in places no one would appreciate them but philistine farming magnates, vulgar copper mine owners, and the uncultured, teeming masses heaving off the boats into the empty new continent. He would take his rightful place beside Hadrian, Bramante and Bernini.

Arriving in Italy before him, with an Argentinian Greyhound as a gift to the dictator, was his proposed design for L’Eternale, a 330metre high, 70,000sqm skyscraper of epic proportions mooted for the centre of Rome, a tower which was to “Eternalise for the centuries the work of the fascist government in the Eternal City.”

The tallest building in the world, but one not at the service of commerce but of the citizen and the state, housing Italy’s new Parliament, lecture halls, meeting rooms, a hotel, library, enormous sports facilities, lighthouse, clock, astronomical observatory, telegraph and telephone stations. The blinding penumbra of the reflected sunlight off its acres and acres of white Carrara marble would be visible for miles out into the Lazian countryside.

A form of cancerous, stage-set eclecticism congealed around the mighty armature of the American skyscraper typology. Or as a Palanti fan put it more generously, his works “surpass futurism, assimilate Indian art, Europeanise the east, aestheticize the American and regulate the Grotesque.”

Neumann explains that Palanti did not know Rome well. He liked the idea of Rome, not the actual city itself with its tiny congested streets. He wasn’t too concerned with practical issues. He suggested the building be built somewhere between Palazzo Chigi, the seat of government, and the Tiber: one of the most densely populated urban areas in Europe. His tower would take up roughly half the district.

Mussolini loved the puppy gifted him by the architect. He went, puppy in tow, to an exhibition of the designs in the Salone della Vittoria at the Palazzo Chigi. Mussolini was impressed, it caught his imagination. It looked American, but bigger, much bigger. It was much taller than St Peter’s. It had more marble than the Vittoriano.

He signed the guestbook, “Per la Mole Littoria, Alala!”. The great man had christened the baby.

The Dictator and the conceited architect had coupled and the father had chosen the baby’s name.

“The President stayed for a long time in order to familiarise himself with all the details of the building and he discussed their technical, artistic and financial aspects, finally expressing his full approval.”

The New York Times ran the “Mole Littoria” as their front page story soon after the exhibition. It was an international sensation. Palanti became a talking point from London to Los Angeles. He rode the wave of fascination with Mussolini’s Italy, with its projection of can-do dynamism. He became a lightning rod for criticism of the regime’s hubris. Adolf Platz in the Deutsche Bauzeitung called it a “deadly sin, against which the world’s Christianity should revolt.” Stadtebau Magazine decried Rome’s “Rape”, the LA Times that it would be “chafing Rome”.

Italians were less theatrical, but according to Neumann the disdain beneath their careful and systematic criticisms was palpable. Death by a thousand reasonable objections. Where could it in actual fact realistically be built? Would it not strain the city’s infrastructure too much? How could something like it be financed? Is its mishmash of styles not out of keeping with the spirit of the era?

Marcello Piacentini, soon to become the regime’s preferred architect and planner, declared “The same sky into which Milan Cathedral reaches or Michelangelo’s dome at St Peter’s, cannot be shared with a skyscraper.” The conclusion: “no skyscrapers anywhere in Italy”.

The international headlines continued, but in Italy the debate had moved on. Palanti’s skyscraper looked like the answer to a question nobody was asking. Cremonesi told Mussolini - who was still keen on the idea - that the proposal would create “very harmful … aesthetic problems for the city,” suggesting the architect might try to achieve his goals with a different building.

The Dictator’s gaze drifted. It wasn’t important enough to push for. The experts were telling him otherwise anyway. He had other difficulties to attend to.

After the endorsement, after his international fame, the last thing Palanti had expected was a deathly wall of silence.

He returned to Italy. He redesigned the tower in several versions of descending height, 300m, 145m, 130m & 80m. Spreading his bets. Better a stump than nothing. He had another exhibition at the Salone Vittoria. Mussolini attended and politely complimented the new project. Like any delusional who will not read implicit signs of rejection, Palanti took this luke-warm nod as full re-endorsement. He published another glossy, expensive book for the new designs.

He returned to Buenos Aires to be greeted by Le Corbusier calling his recently completed Uruguayan tower an “unbearable hodgepodge … a monstrous copulation of American and Italian pastry … with delicatessen as ornament and fat dripping from its edges … a ‘public calamity’,” that was at the same time “very funny.”

Things were slipping through his fingers. Becoming desperate for his Italian dream he returned once again, this time entering the competition for a Palazzo Littorio opposite the Bailica of Maxentius.

He stole two prize racehorses that belonged to his wife and gifted them to Mussolini. They were returned.

He did not win. His designs were ridiculed, says Dietrich Neumann, as “Carnivalesque Cake” and “Shark-like South American snobbery.”

Palanti had missed his moment but his delusions only grew, precluding his acknowledgement of failure. He had a special relationship with the Dictator, Mussolini understood his genius even if no one else did. He gave up his lucrative but glory-less Argentine career, he moved permanently to Italy to chase prestige. He left his rich wife. He published more books, designed more grandiose projects. He proposed amongst other things a Torre Littorio in Milan based on the letter M.

Despite his increasingly pathetic efforts Palanti only ever completed one project in Italy, a symbolically appropriate tomb in the Cimitero Monumentale di Milano. Palanti and his tomb.

According to Neumann, no newspaper, international or Italian, would ever publish him again. He never again received so much as a word from the Dictator. He never built again. The coupling of the architect and the tyrant had in the end been sterile, mostly unrequited, and had driven the lover mad.

The architect half-lived for another thirty years in a small flat in Milan, broke, alone, silently surveying the rise of and burgeoning fame of other men in his generation, men he once looked down upon from the height of his Mole Littoria.

Surrounded by piles of his various visionary towers, and ancient articles on his once “recklessly extravagant and ingeniously eccentric” imaginary projects that had been discussed from Tokyo to Montreal, Palanti eventually died, another forgotten victim of the maddening allure that Rome exerts on men, dictators and architects alike, with the irresistible challenge it poses to each successive generation: to make your mark if you dare, to equal or surpass the impossible greatness of its past, if you can.

References:
[1] Dietrich C Neumann, “A Skyscraper for Mussolini”, AA Files 68 p.141-153
You can also learn more about Mario Palanti and his ill-fated plan for Rome by watching Dietrich Neumann's 2010 Silberberg Lecture at NYU. See in particular the computer animation and renderings by Henry Harding (Brown '12) at 19:18 ff.

Follow Furman's blog on The Roman Singularity here (until March 2015). You can see a selection of Furman's latest capriccios as part of the project below, or browse the ever expanding collection here.

This essay was amended on November 16th to more thoroughly attribute its source. 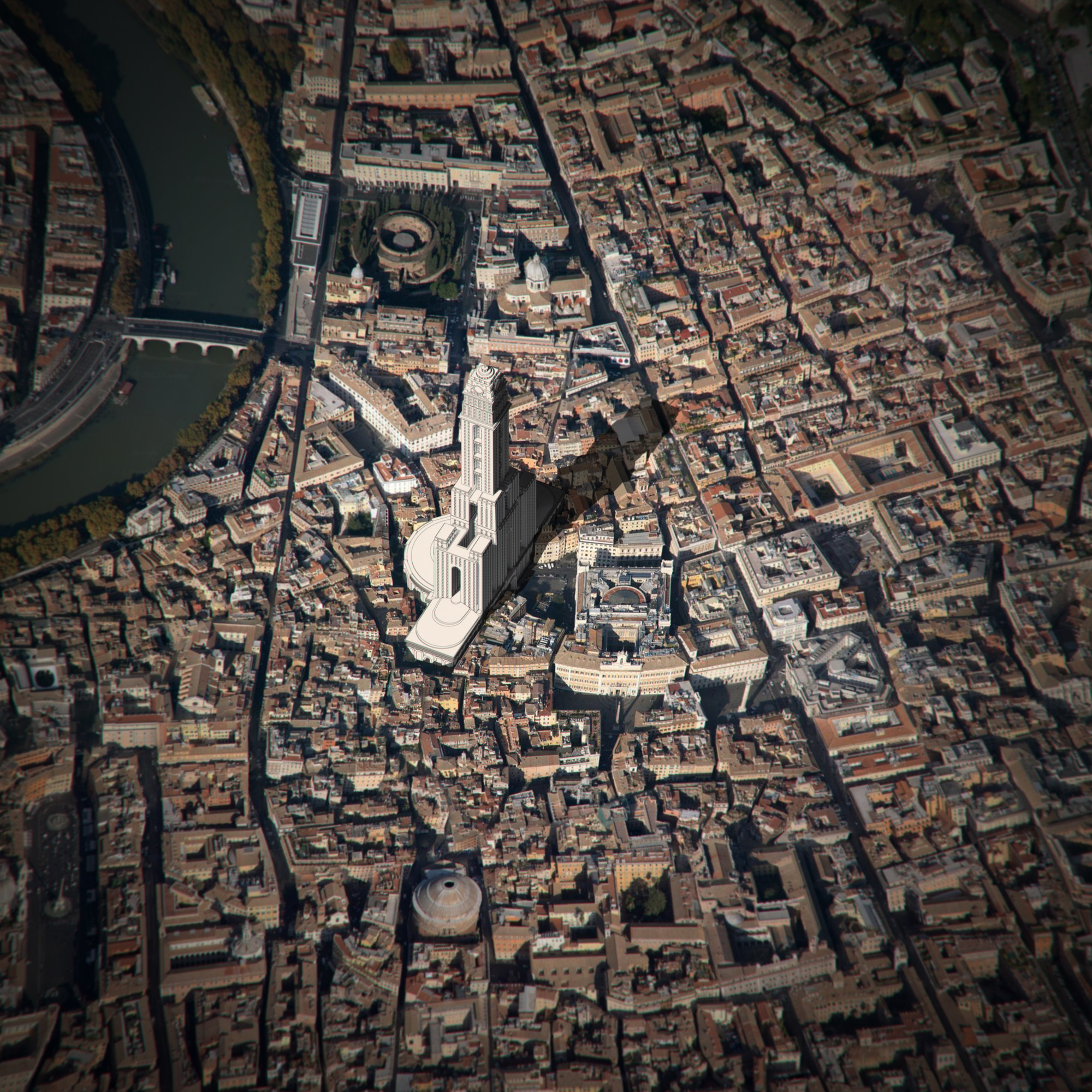 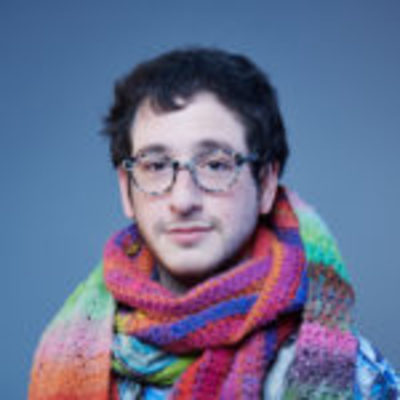