WikiHouse, the open-source platform for designing and sharing house designs that anyone can be manufacture and assemble in days with no construction skills, has unveiled 'WikiHouse 4.0' their first ever two-storey design at this year's London Design Festival. Built by a team of volunteers and costing less than £50,000, the new prototype on display at The Building Centre also demonstrates the possibilities of other open source systems, with the code for the electrics, ventilation system and sensors all available on open-source platforms.

More on WikiHouse 4.0 after the break 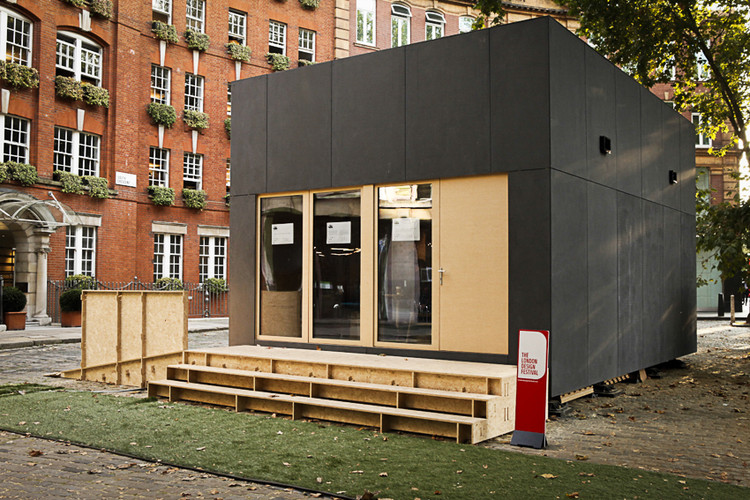 The prototype aims to educate visitors to the London Design Festival about how the WikiHouse works, with the interior layers of the building being exposed in places to show how the CNC-manufactured timber structure fits together, and how it becomes air-tight and waterproof through the use of Tyvek waterproofing and Equitone fibre cement cladding. The building also invites people to explore the rooftop terrace, the first time that a WikiHouse construction has incorporated a second storey.

Alastair Parvin, the co-founder of WikiHouse, said "What we are trying to do with this installation is to spark people’s imagination about how technology can now enable almost anyone to afford their own custom-built house without the need for conventional construction skills.

"We don’t believe that WikiHouse is the only solution to the current housing crisis, but we do want to host a disruptive debate and challenge landowners, urban planners and policy makers to think differently about the barriers - such as land or building costs."

Among the open source technologies used in the prototype is Open MVHR, an open-source heat recovery unit developed by Arup and built using 3D printed components and aluminium sheet from beer cans. The electrical components in the prototype are all low-voltage "plug-and-play" components, allowing easy and safe installation and adaptation. These electrical systems are also adjustable with a browser-based control system that works through the building's wifi.

"A digital world is emerging where people can connect with anyone around the globe through a simple click," said Nina Tabink, a Senior Structural Engineer at Arup, who also collaborated on the installation. "Arup believes in the potential of digital fabrication and open source technology and how this will provide an alternative collaborative way of working, bringing increased efficiencies. WikiHouse has proven to be a perfect partner to explore these new technologies."

WikiHouse 4.0 is on display at The Building Centre until September 26th.