Peter Smithson (18 September 1923 – 3 March 2003), the acclaimed British architect often associated with New Brutalism, would have turned 91 today. He attended the school of architecture in Newcastle, but left to serve in the war in India and Burma. After returning to complete his degree in 1948, he enrolled in the Royal Academy architecture school. In 1950 he set up his own practice with his wife Alison, and the two went on to become some of the most influential British architects of the mid-20th century. 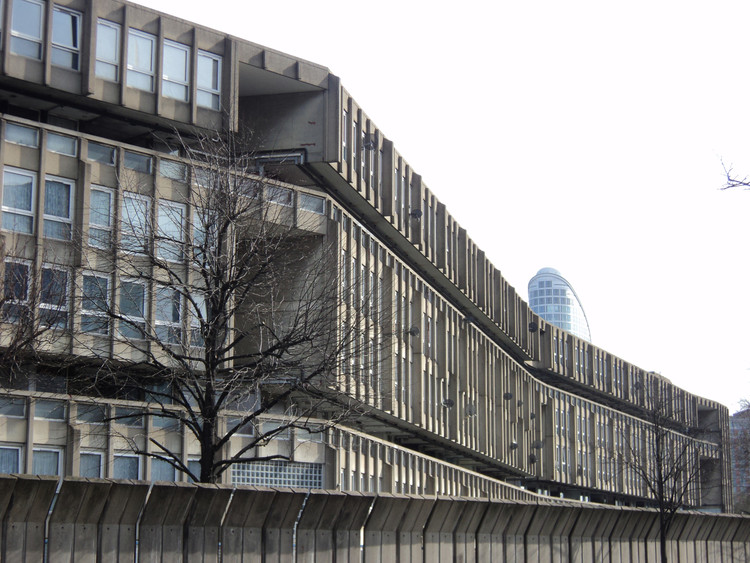 Together they completed numerous projects including the Economist Building and the Robin Hood Gardens housing complex, and even contributed to the British pop art movement. Their project for the Hunstanton School, with its high modernist language and rough finishes, brought them to the forefront of post-war British architecture.

Although at times subjected to harsh attacks, their unique style defined a new approach to modernist architecture by utilizing mass-produced and pre-fabricated materials. In 1955, design theorist Reyner Banham hailed them as pioneers of “the new brutalism” referencing both their ascetic style and Peter’s college nickname “Brutus.”

Smithson and his wife were important figures in the cultural scene of 1950s London and curated numerous art exhibitions alongside their work in architecture. Peter Smithson’s dedication to his personal convictions sometimes led to intense criticism, but he will be remembered for his bold contributions to modern British architecture throughout the 20th century.

Story via Design Museum and The Guardian