Already one of the most remarkable examples of China’s urban growth in the last 30 years, Shenzhen will soon also host a bustling new financial district. The Shenzhen Bay Super City Masterplan aims to create a new city center with top headquarter offices for global corporations and related venues for international conferences, exhibitions, and cultural programs. KAMJZ Architects has recently revealed their competition entry with a plan that proposes a more sustainable city center through the design of a radical new typology for office towers. Read on after the break to learn more about the proposed masterplan. 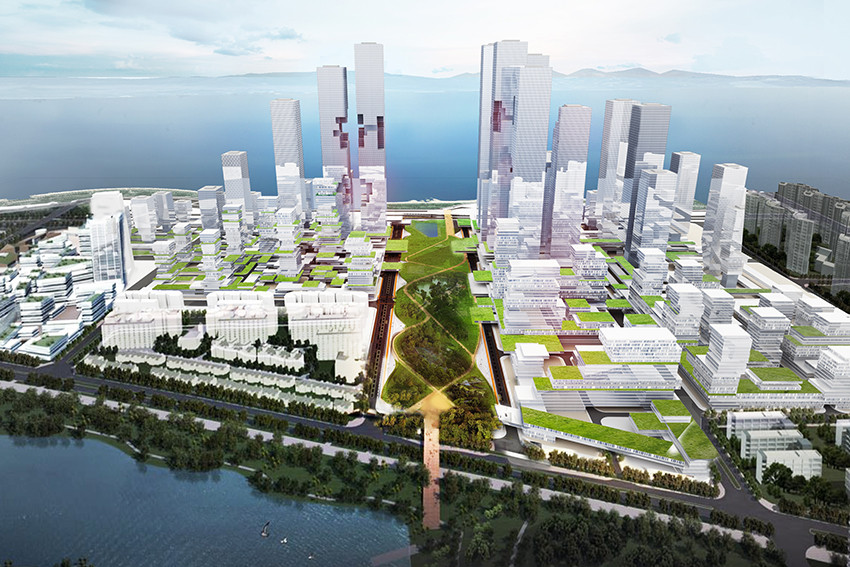 As Chinese cities expand, new transportation networks and urban city centers must be designed to deal with the environmental consequences that come with dramatic population growth. The Shenzhen Bay Ring area will become the most prominent urban center in the region and KAMJZ Architects have proposed a masterplan that prioritizes urban life and sustainability over the traditional model of soaring skyscrapers. Their proposal does not aim to create yet another symbolic icon for the city, but rather, hopes to draw attention to views of Shenzhen’s unique landscape and deliver a pedestrian friendly infrastructure for the entire Shenzhen City area.

The office towers that are being built in cities across the globe come with many downsides and often lack the necessary features to make them economically and environmentally sustainable. Because Shenzhen was built on reclaimed land that was once water, tall and slender towers require deeper and more expensive foundations and piling. In addition, elevators and stairwells take up large portions of the usable square footage on each floor. These towers also result in a less vibrant street life as space on the ground floor is often taken up by large lobbies and exit ramps. This plan attempts to alleviate many of the issues with conventional office towers through the use of elevated walkways, ramps for bicyclists, and public green spaces integrated in the design of the towers themselves.

The plan focuses on creating maximum usable space in the towers for people rather than competing for the title of the tallest building in the skyline. An identifiable feature in the design is the terraced form and the creation of outdoor balconies at various heights in the buildings. Outdoor terraces would provide space for retail shops and pedestrian spaces, while potentially spreading out across Shenzhen Super City. These terraces are a key component in the masterplan to allow for rainwater harvesting, solar energy, and green spaces. As these terraces are elevated from the street level, they provide shade for the spaces below and act as large public gardens.