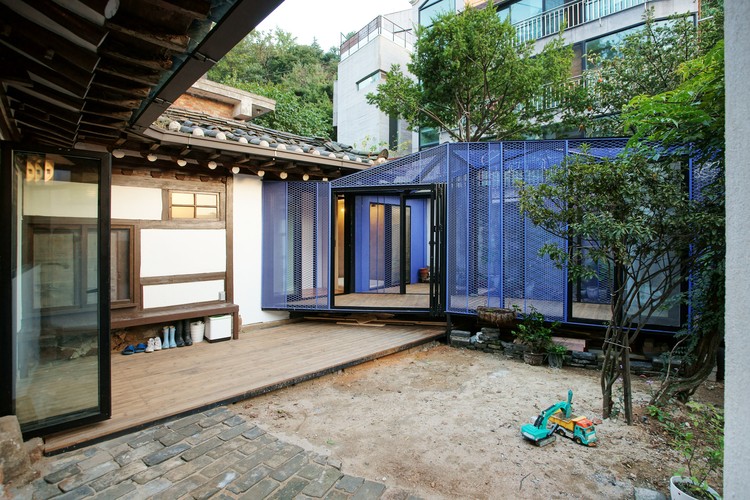 Text description provided by the architects. Buam-dong is an old neighborhood that used to be covered in plum trees. It is located at the foot of Mount Bukak. One home maintained Korea ‘s traditional urban housing style from the 1960s onward, and the clients, drawn to the style, bought it from the old couple who had owned it.

The house comprised four large spaces. The close to fifty-year-old traditional Korean edifice, a storeroom added later, and two yards created by the house and storeroom. We created a flow of space linking these four separate spaces so that we could re-define the function and purpose of each space.

The first space we dealt with was the traditional house. The condition was very bad, especially its structure. The pillars supporting the roof were rotten, the walls were visibly tilted, and the roof had partially collapsed here and there, with some of rafters actually broken. Sadly, it seemed the house had run its course.

However, the clients were adamant. They wanted to keep the old house and its old fixtures as much as possible, even if such decision might cause various discomforts in physical terms.

To achieve this, reinforcement of the structure was desperately needed along with replacement of the pillars to stand the tilted house upright once more. We strengthened the structure with new beams, eliminating the rotten pillars and old beams, and put the house back into an upright position, lifting the whole house. The broken rafters were replaced, and the leaking roof tiles repaired. Finally, the stuffy interior of the house was changed into a tall space by lowering the floor height. For the storeroom, The structure was reinforced and insulation and heating were added to create a suitable living space.

Lastly, to complete the new house, a bridging space was added. This linked the traditional house with the yards, the storeroom turned into a new building. A small yard leading out from the new building divides the yards and defines their use.

The house comprises four distinctive spaces: a traditional Korean house that underwent major cosmetic surgery, a blue bridge, a storeroom turned into a new building, and a back yard. Each space creates a feeling distinct from the others, such that it seems like different houses are all in one place, but at the same time, these spaces with different features continue to create diverse imagery in abundance within the flow line linking the whole house. This is a special gift that can only be manifest when an old house is respected and what lies within is maintained harmoniously.