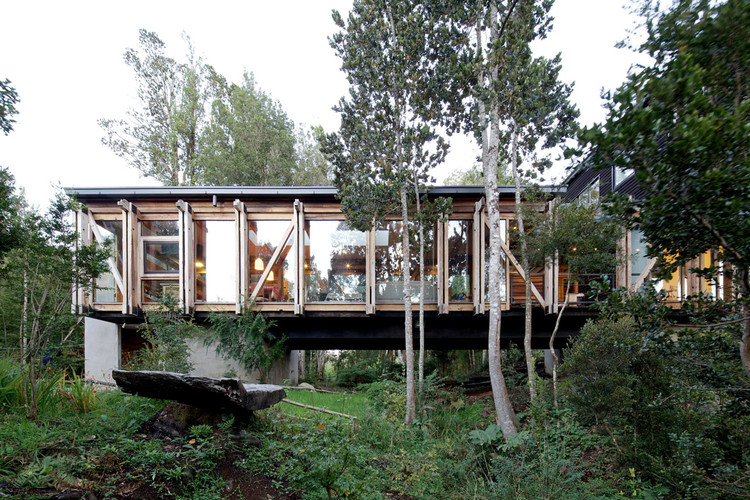 Text description provided by the architects. The project is located in an area ​​100 x 50 meters, located in a forest of Ulmos, Melis Myrtles and other native species. It is crossed longitudinally by a stream, modeling the topography of the soil.

The stream and its path through the land, generate the general idea of the project.

To cross the stream like a bridge, rescuing the light and transparent language that allows the project to be inserted into the forest without dramatically altering the major components of the environment.

The impact on the forest and the stream is minimal.

In the search for the site, we chose an area clear of large trees, where the basin generates a level difference of 2.5 between the two sides. This allowed us to differentiate the supports (two concrete blocks), one as a foundation near the natural ground level (south edge) and the other as a support base on the north side.

The base contains the main access, made of a vestibule that leads to a staircase up to the main level.

This volume is structured on two concrete blocks, on which three steel beams with a 12 meter span are anchored and supported. Above them is a frame of beams and double wood columns. Among the columns, double glazed windows use as center or frame the same existing structure.

This allows to minimize the elements and maximize the views.

The total length of the main volume and can be seen walking through a glazed corridor between the two accesses, through the exposed structure of columns and diagonals that ends in a secondary access. This allows a continuous path between both sides of the stream.

Inside it is the public program of the house, the hallways, kitchen, dining-living room are integrated, and at the end of the common areas is a covered terrace.

Conversely, another volume with the bedrooms and more private spaces of the house rests on the main volume. Thus, its language is more opaque and largely closed to the South. The height reached with respect to the ground level allows a clear and distant view through the treetops.

Among the important initial requirements was to use sustainable native woods. The general structure; beams and exposed columns as well as floors, ceilings, doors and frames are made of Laurel demolition wood (rescued from the demolition of former villas that are abandoned over time due to the decline in family size and high maintenance costs).

The other materials used were: 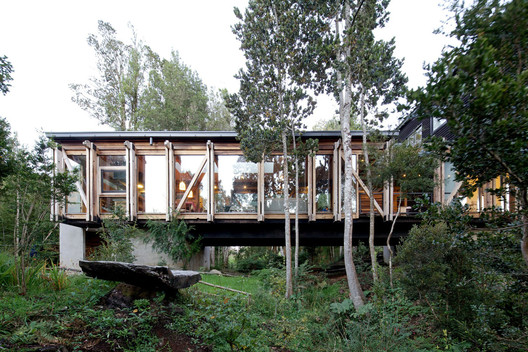