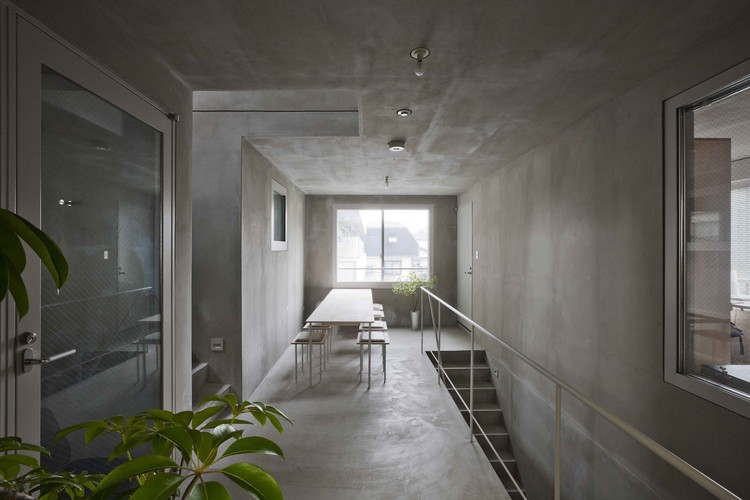 Text description provided by the architects. Place in common space It is a housing complex in five story and 13 households that builts like overcrowding the small factory and the house in surroundings. In the situation in which the site was almost enclosed in the building, it was thought that it had not only relies on the surrounding for the dwelling environment but also it made it . A common space plays the role here. The lighting, ventilation ,and view, and the element requested outside is usually taken in construction, and shared with each unit.

A common part is related around according to the number of stories and the direction the accumulated unit that continues from ground to the roof through the stairs and the open ceiling, and choosing the omission on the roof of the road and the near unoccupied land and the neighboring house. The wind comes off through an upper and lower floor, and the light of the sun enters from various directions through a day . Externals are composed of an window that doesn't distinguish an unit and a common space . A common space in each floor is a place like the interior attached to each unit by a little expanding or more width than a usual passage ,and as a similar scale to the unit.

As for a common space, it thought even about the detail as the same interior as the unit so that the other side of the room window might make depth with a continuous feeling as another whereabouts . The aluminium sash of ready-made goods turns a wooden frame to all sides in flat as the wall for how from the reason for the weather flashing like the outside to see it, and erases the detail as the aluminium sash. Moreover, because a usual intercom gives the impression of the place like the hall, the plate of the same specification as the indoor switch is used .

The table, the bench, and the shelf designed for exclusive use according to the characteristic and the usage of the place are put on the interior. Time is piled by the book and planting's being put by the living person, and being used in daily life. It wishes a common space not only the tenant but also to tie to the person to person, and the environment to person exceeding the role even if the ambient surrounding changes by rebuilding.