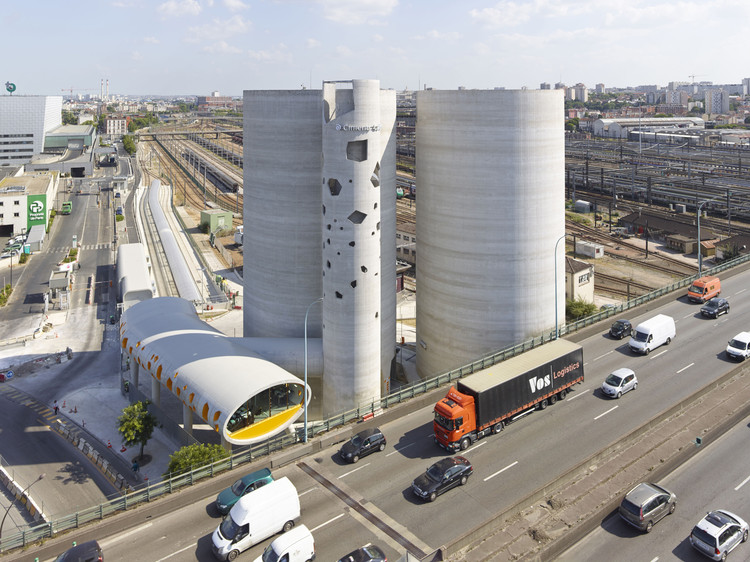 The project is located 5 meters away from Paris eastern ring road, at the end of Zac Rive Gauche’s large development district. Urban studies conducted by Ateliers LION since 2000, as well as new Urban regulation (PLU) updated in 2010, have made room for a new Bruneseau Nord neighborhood. This project is characterized by high rise buildings and mixed programs where architecture and infrastructure meet. To allow for this new development, the city of Paris has asked Ciments Calcia to give up their existing distribution center located near the Seine, and offered a new site closer to the existing rails out of Austerlitz station. Semapa undertook the building of this new project for Ciments Calcia.

The project, which transforms an industrial facility into an urban sculpture, is to be considered as the first step of a process to transform the new Bruneseau Nord site.

3 conditions were called for to make this building possible:

• the urban and political vision to extend the city to the East with a pedestrian link from Paris to Ivry. The existing centre was linked to the rail network via a single rail line that cut diagonally through the neighborhood. The new building obviously needed to be moved to allow for this new large development.

• the desire to develop this forgotten industrial area, despite the difficulties linked to the many existing networks and technical issues or urban rules, as well as the decision to maintain this industrial activity within the city’s new fabric.

• the presence of a contractor such as Vinci TPI, specialized in civil engineering structures was needed to raise the main silos and gave us a rare chance to design buildings with unusual tools and resources, usually reserved for large infrastructure design.

«This project is the first step to develop Paris’s new Eastern district. The initial question for us clearly was to insert the project in the coming urban project and bring in «bold design» to the industrial plant. The project was long to design at first, due to high stakes and its noticeable location along Paris’ ring road - Europe’s busiest freeway with an average 300.000 vehicles a day. The initial 50 meter high silos project was rejected during the building approval phase - despite urban planning and new regulations allowing for high rises, and we were asked to redesign a 37 m high project to fit Paris’s usual maximum height. This implied new major constraints. The silos had to be widened to 20m to allow for the same volume of cement, making the site almost too small to hold the program.

At this stage in june 2011, we had one weekend to design a whole new project and be ready for a last chance meeting, attended by every authority involved with the project. These constraints called for a bold and clear project.

By that time, it was obvious that Calcia - who would be running the center - would prefer materials that promote their people’s skills and business of making and selling cement, to erect wonderful buildings around the city.

Our answer was what it is now: first, the main silos had to be inserted in the one and only position that allowed for all existing flux and networks to work. Then the quality control center , because it had to rest on ground, was slided underneath the “peripherique”. The office building was set right on the property limit and high on pilars for trucks to come in below. The whole program could then be linked together by a vertical cylinder housing a stair and lift. The project had become quite simple: the whole program, including offices and quality control center, was inserted in 5 different indiviual silos, all made of concrete, rising from the ground surfaced with concrete too».

The Scale of the Building

One is now instantaneously overwhelmed by the mass of the project. Although it uses common technical language and fittings, the building has been transformed into a unique work space, dedicated to the material it contains: the silos, the stair tour, the offices, the test center and the ground too, are all made from concrete. The material reveals much of its plastic potential. Not one element that stands out. The project is a whole, it is alive, a sort of abstraction of bodies rising from the ground and attracting each other into one unique place.

Many techniques used for construction

The project relies on many different uses of concrete. The main silos and the vertical tower were cast in slipform, a robust method to do this. The platform, rose by 2,5 cm per hour which took 3 weeks, day and night, in February, and 2 weeks in June 2013 to get to the top of each of the 37m silos, with an average of 15 workers constantly on deck.

The shells for the horizontal silos were prefabricated, then trucked-in, lifted, rolled and fitted in no more than 24 hours for each entity.

For the office and quality control center, the light at either end of the ‘silos’ was not enough for all work spaces. The opening on the shells had to be big enough to bring in light but small enough to keep the mass and the surface. The polygonal shape chosen for these openings was imagined as a form of abstraction of two different ideas: the shape of the stones that are used in making the concrete as one, or a mineral fragment or a broken rock as another.

The making of the fixed polygonal aluminum windows was complex. The first issue was the geometry of the polygon meeting with the cylindrical shell - that was sorted with the offices 3D tools. The second, more complex issue, was that to do with current regulations that require really sophisticated de- sign for waterproofing and drainage. We called-in Arcora, our usual facade engineers, to help us design these and make them fit current standards.

The vertical lift/stair tower is the most visible piece of the building, that acts as a signal by rising only 5 meters from the ring road. The design for the openings is similar but they were fitted with a simple inox mesh. We wanted the openings to widen up and lighten up as the tower rises, in contrast to the main silos in the background.

Special attention was required for the main fence. It was agreed that the center should be perceivable from the street. Our system allows for visual porosity on the industrial activity, without imposing the heavy trucks onto the new quarter. Our proposal allows for the site to be seen, or hidden, depending on the angle from which one looks.

«Considering the new urban project, it was obvious that our existing plant had to be moved if we wanted to keep our activity running in Bruneseau, says Jerome Lestringant, general manager for Ciments Calcia’s distribution centers in France. The catchment area of our existing center in Tolbiac was quite concentrated and dense: around 80% of our clients are within 30 km around the site. We obviously wanted to stay near them»

Stay as close as possible to the City

«The key quality for the existing plant in Tolbiac rests in its strategic position at the heart of the city. While 100% of the cement comes upstream by train, the last few kilometers made downstream by truck by our clients, is usually done in the opposite direction from main urban traffic directions. Moving the plant away from this position would have increase truck movements by15 000 a year, in the direction identival to the already oversaturated general traffic.»

«Our aim was to create a sustainable project, says M. Lestringant. We wanted to maintain the rail delivery, and to keep the possibility to supply our cement via the nearby Seine. That was another incentive to stay close to our old site. The city of Paris heard our arguments and approved our plans. They rightly considered that our proposal fitted with their vision of preserving mixed uses in the new Bruneseau district.»

A piece of art

A work of art, imagined by Laurent Grasso is currently being tested. It will give yet another dimension to this already atypical urban project. 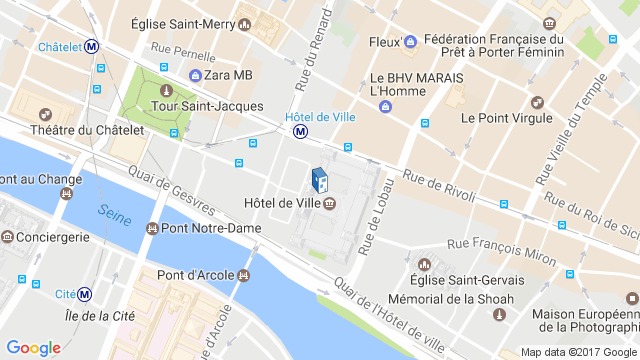 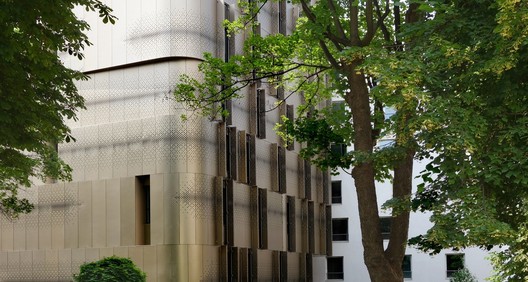 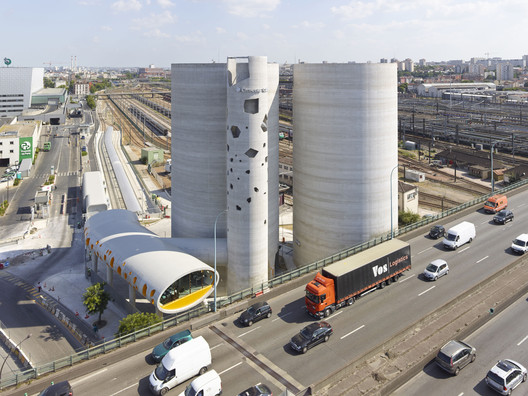