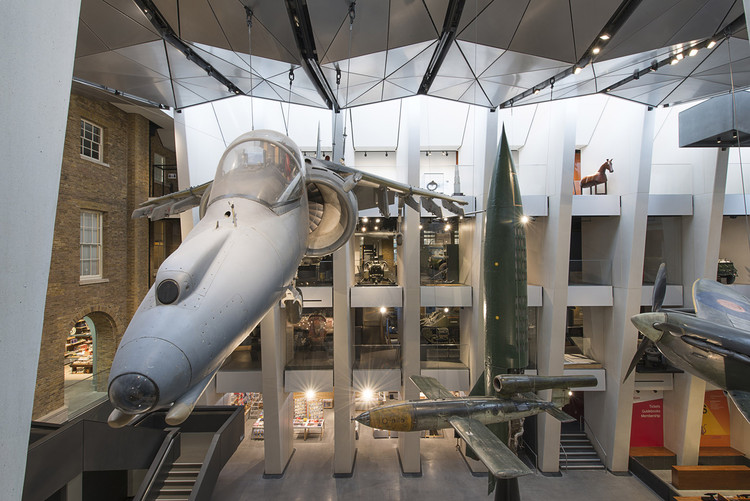 Text description provided by the architects. As part of the commemoration of the centenary of the First World War, impressive new galleries centred on a new atrium have been unveiled today at the Imperial War Museum. These new public spaces represent the first phase of a long-term redevelopment project, which will improve access and circulation through the Museum, open the interiors to daylight and views, and create new connections with the surrounding park.

The heart of the building is a generous new atrium, which provides a dramatic space in which to view the largest objects from the Museum’s collection. The relationship between these exhibits and the surrounding galleries has been completely redefined – the Harrier jet, Spitfire, V2 rocket and other iconic objects are suspended to correspond with the gallery displays on each of the floors for the first time. Viewed from the upper levels, the aircraft are framed by a series of large-scale concrete fins. These fins line the atrium and widen as they rise to provide structural support for the aircraft, extended gallery floors and barrel vaulted roof. Terraces between the fins open up visual connections vertically and across the central space, and a new gallery floor suspended beneath the dome of the roof protects the exhibits from direct sunlight.

The galleries have been completely reconfigured, with a new chronological arrangement designed to be more intuitive. The new First World War Galleries, with interiors by Casson Mann, are located at ground level, and the top floor of the building will eventually be dedicated to current conflicts. Vertical circulation has also been redesigned to make the connections between floors more visible – a new cantilevered stair forms the backdrop to the atrium.

Rather than encroaching on the exhibition space, the café and shop have now been relocated to the new, lower entrance level at ground floor. The previously sealed ground floor windows along the western façade have been opened up to allow views into the museum, as well as views of the park from the atrium. The café can now be used outside of the Museum’s opening hours, and its seating extends into the park to create an open air dining area.

The floor of the atrium has been lowered to park level, in anticipation of a future phase of development, in which the approach to the building will be scooped out to create a single, accessible entrance for all below the existing portico stair. The current entrance staircase is temporary and will be removed when the new approach sequence is complete. The planned oval forecourt will create a public plaza, visually balancing the weight of the historic building and emphasising the Imperial War Museum as a contemporary institution, while retaining the integrity of the existing structure.

“Our project for the Imperial War Museum makes an important contribution to our ongoing work in historic buildings. We have peeled away some of the recent additions to celebrate and restore the historic architecture, opening the building up to the park and revealing the gallery levels inside an impressive new hall.”

“It is a privilege to work with the Imperial War Museum to commemorate this important centenary – the process of learning about the collection and working with the Museum’s curators and staff has been fascinating. Today’s events are an important milestone in the long-term regeneration of the building, a project that will transform the experience for visitors and establish a new relationship with the surrounding park, which will benefit both.” 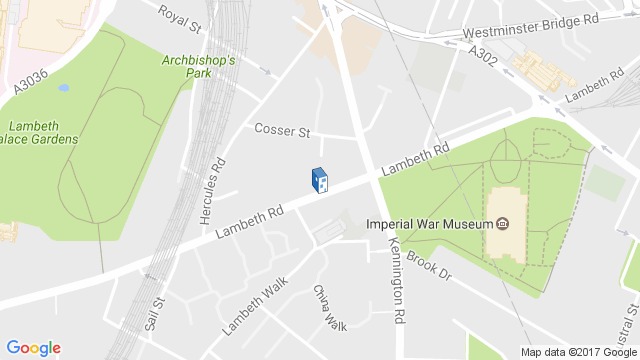