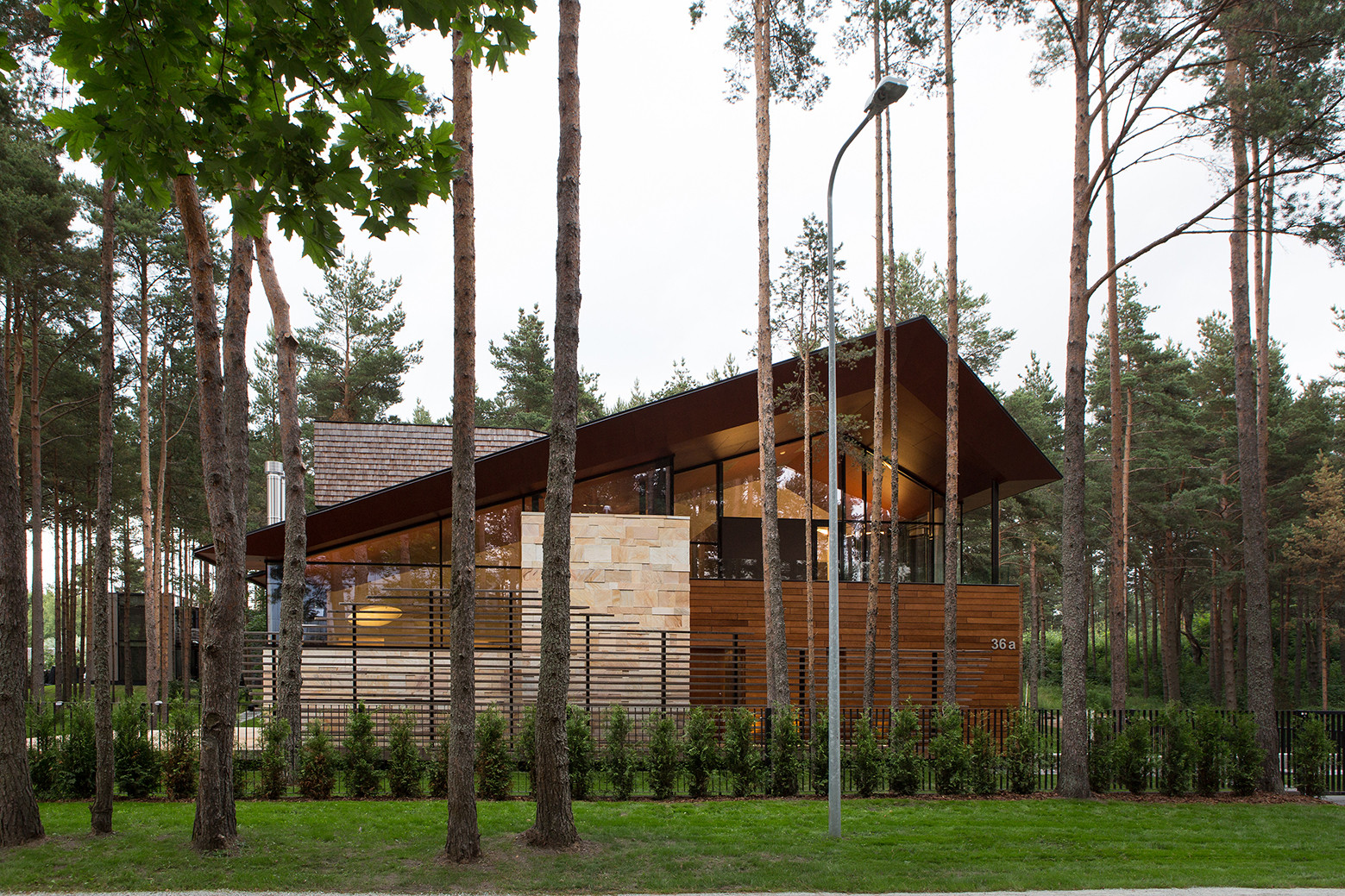 Text description provided by the architects. The plot of land where this private residence was built is located in a city in a private housing development. The district is full of pine trees, so the house feels like it is surrounded by forest.

A minor road runs along the length of the plot.

The building's surroundings played a role in its composition; the presence of the trees and the variation in terrain acted as invisible assistants in the design of the house.

The vicinity of the road made the task a little more complicated, but at the same time it allowed architectural devices to be used which would later enhance the form of the building.

The initial concept for the building was to create a structure formed of two elements with different purposes - a social space (common area) and a private zone.

The common area is located along the road, whilst the private zone was placed at the back of the plot.

These two volumes are completely different, both in their form and in the principles employed for organising space.

The social space is an open, glass structure, with walls only in the sitting areas at a sufficient height to prevent the room being visible from the road.

The private zone was built as a separate block, with windows on its façades. The size and location of the window openings on the surface of the façade are purely functional. The social space is covered by a roof that resembles the wings of a bird in take-off, giving the feeling of open space and a connection with the surrounding landscape.

All the bedrooms are in the private zone, and each bedroom has its own en-suite bathroom.

The master bedroom is in the very centre of the building, under the 'wings' of the roof.

This part of the house is flooded with sunlight and closely linked to the environment.

However, the blinds can also be closed when required.

The kitchen and dining area are in an open-plan space with a soft zone (sofa), and are separated only by a small wall, which does not go down to the floor, thus creating the impression of a unified space.

The same thinking was employed for the finishes - the same material, colour and texture are employed inside and outside, except for the private block, where tranquil, pale tones and paintwork prevail.

The house is set in woodland where there is little sunlight and practically no wind, which placed some constraints on the use of energy-efficient equipment.

We managed to fit the house with an air source heat pump, providing energy for the heating system and for cooling on warm summer days.

All the energy systems and the lighting, automatic gates, blinds and air humidifying system are controlled by KNX.