Update May 20th 2015: Once again uncovered by New York YIMBY, development company Extell has released the first official rendering of 217 West 57th Street, also known as the Nordstrom Tower, as shown above. Below, see our coverage of the first unofficial images from last year.

The designs of the Nordstrom Tower in New York, the world's tallest residential building at 1,775 feet tall, have been revealed to New York YIMBY by an anonymous tipster close to the project. The project at 225 West 57th Street by Adrian Smith + Gordon Gill Architecture will be one foot short of 1 World Trade Center, and with its 1,451 high roof will finally reclaim the title of United States' tallest roof from Chicago's Willis Tower.

More on the Nordstrom Tower after the break

The designs show a building in keeping with New York's traditional 'wedding-cake' type towers, with a series of set-backs as the tower ascends, as well as a cantilever which hangs over the historic Arts Students League building. The facade of the building features a series of steel fins and aluminum louvers to complement the curtain glass facade.

The renders shown here, which are not official renders, were created by Otie O'Daniel and based on the structural designs released to New York YIMBY. The building is currently scheduled for completion in 2018.

Story via Curbed NY and New York YIMBY. This article was first published on July 14th 2014 under the title "Designs Revealed of the Nordstrom Tower, the World's Tallest Residential Building." 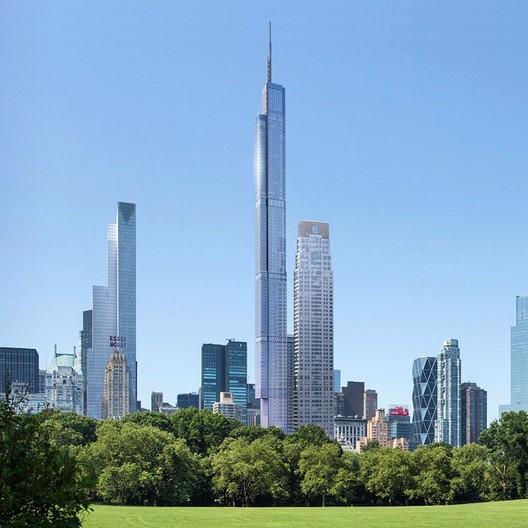