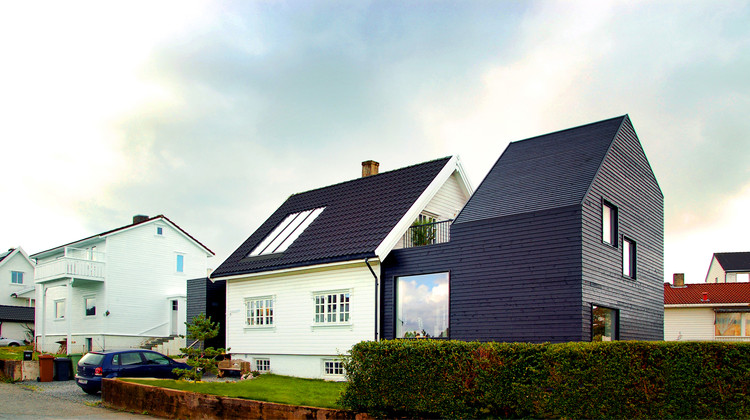 Text description provided by the architects. This extension to a single-family house in Stavanger was made to make room for a growing family in a city which has become increasingly dense over the last decades due to the economic boom related to the area's oil industry. The building authorities accepted extension beyond original restrictions but wanted a modern expression, and found common ground with the architects in letting the existing building be preserved as a clear and city-typical shape. Stavanger has also recently been host to the Norwegian Wood project, part of Stavanger 2008 – European City of Culture, and there is reason to believe that the municipal authorities in Stavanger has achieved a more clear and mature architectural policy through the specific focus which that project gave.

The form concept involved a combination of distancing itself from the main building and yet still letting this stand in the middle as the most important element. Furthermore this is emphasised by following the existing roof slopes, the ridge and the cornice as well as the contrasting color.

The large extension to the north contains two small bedrooms at the top, a living room at ground level, and a combined home-cinema-and-exercise room with a classical skylight flushing down the concrete wall in the basement. The two bedrooms are present as up hung objects in the living room, and are reached by a winding staircase connected at the top by a glass platform-and-stairs leading to the roof terrace.The small extension to the south contains bathroom and main entrance. Between the main body and large extension there is a roof terrace where the dark paint is given the slightest of warm pigment, letting this place be a bit friendlier.