The Middle East has historically been known for many things — sustainability not being one of them. The clash of Western values with the harshness of the local climate can often wedge sustainability between a lot of sand and a hard place. Though there is a broad critique of the unsustainable attributes of the region’s development path, for years there has been a shining exception: Masdar City in the United Arab Emirates, seventeen kilometers east-south-east from the city of Abu Dhabi.

But Masdar City is certainly not without its share of critics. On first approach, the concentrated development, located in the center of six square kilometers of empty space, does little to awe, especially in comparison to the sprawling wave that is Abu Dhabi. Thanks largely to the global financial recession, buildings currently comprise less than 10% of the area committed to the urban experiment. Even today there is a group of onlookers that suggest Masdar City may just be a mirage after all.

However, this broader view is not necessarily synonymous with the bigger picture. 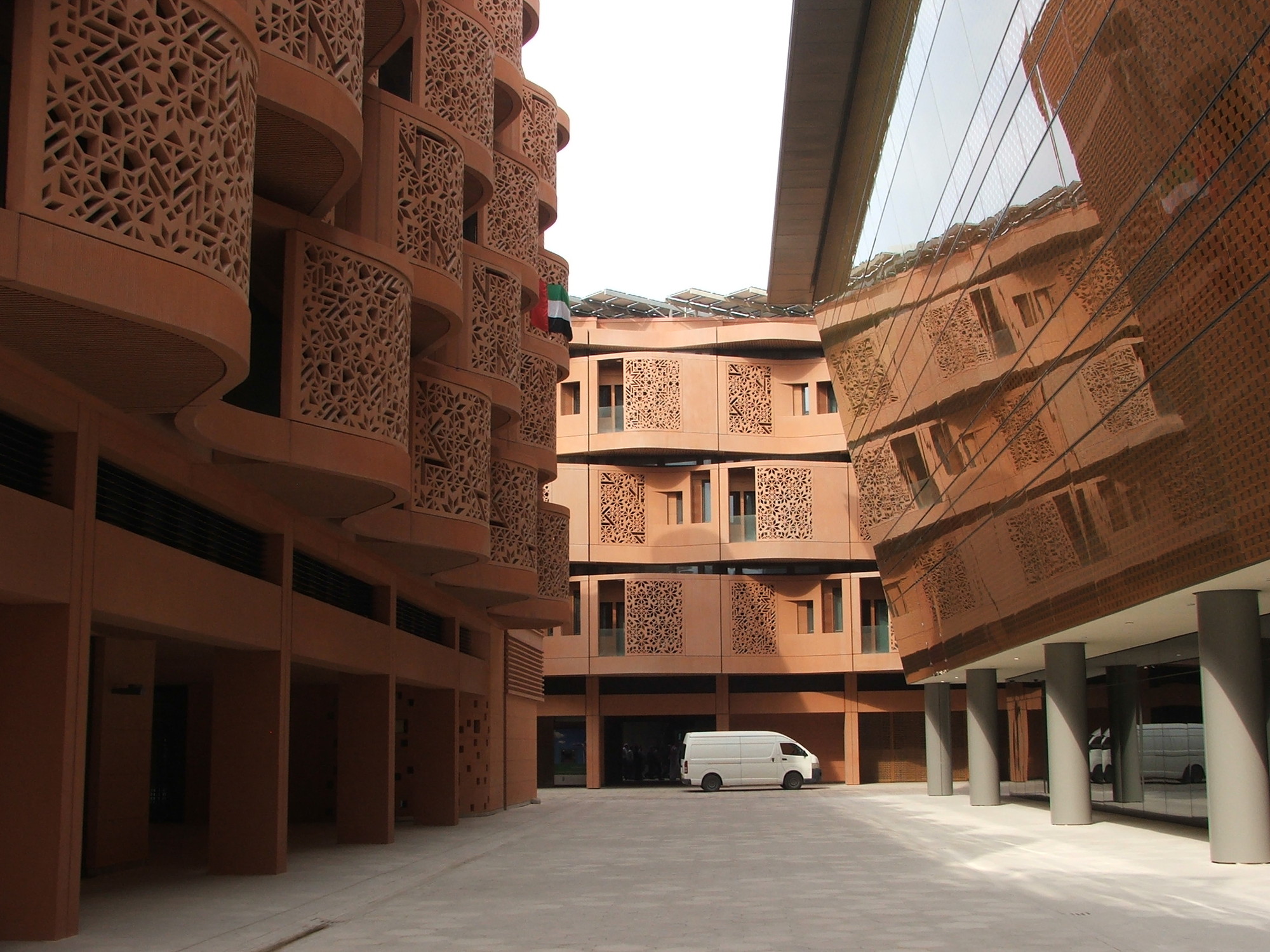 Since its inception, the city's master plan has been shepherded by Foster + Partners, who have also designed all of the buildings to date (except the most recently completed Siemens Building). Nothing in the city appears to have been conceived without thoughtful intention. The face of every building, the end of every street and the layout of every public space is part of a balanced composition. Nothing looks to be out of place or extraneous. One could argue that having a single hand behind the design effort has compromised the opportunity for the random urban event, the unintended residual condition, the undesigned happenstance that so often defines the urban spaces we love. At the same time, what exists now is only a fraction of the city’s intended fabric, anticipated to house 40,000 residents in addition to 50,000 daily commuters.

Walking through the city, Masdar’s City Design Manager, Chris Wan, shows me the various components of each building that work towards creating a sustainable urban environment in one of the world’s least hospitable climates. Some structures are clad in terracotta panels that serve as private balconies, others in delicate metal screens, and some test air-filled reflective wall panels (used to lower the thermal mass of the exterior wall while simultaneously reflecting sunlight away from it). Chris points out that “Like all good sustainable architecture, all these features do more than one thing at the same time.”

The buildings of the existing core top out around 4 or 5 stories above street level. The absence of cars allows the main circulation to be narrower, bringing the added benefit of passive solar shading to the street surface. According to Wan, the streets get only 30-45 minutes of direct sunlight a day in the desert climate, contributing to the fact that temperatures are reportedly 10-15 degrees lower inside Masdar City than Abu Dhabi (a testament to the power that heat islands have in manipulating local climates).

Coupled with the PVs on the tops of many of the buildings themselves, an impressive 10 MW solar facility sits on the edge of the development area, producing more clean power than the city uses on a daily basis. The main axis of the city is rotated to align the grid with the prevailing wind. In the end, Wan suggests that the passive design strategies might contribute most to the city's long term success: “A lot of the savings come from good and simple architecture,” Wan insisted. Things like building orientation, solar shading and materiality go a long way for the heavy lifting without an army of gizmos and doodads.

Functionality is designed into the entirety of the plan throughout its many phases and iterations. When London-based firm Sheppard Robson proposed their design for Siemens' new Middle Eastern Headquarters they elected to lift their building a story off the ground to harness the natural breeze and circulate it through the structure with the help of the Venturi Effect. In the process they also created a shaded, public space at street level with expansive views out over the rest of the site. It all sounds good as a sound bite, but when you stand beneath the building and hold your arms out with the breeze moving over you, there is no denying it actually works. Wan was right when he proudly stated, “You don’t see the masterplan, you feel the masterplan. No drawing can substitute that.”

Despite the fact that the Siemen’s building is the first LEED Platinum building in Abu Dhabi — not a small achievement in the middle of the desert — Wan doesn’t see it as the finish line. Regarding future buildings to come, Wan exclaimed, “Let’s blow LEED Platinum out of the water.”

Still, those that come to the site looking for some technological breakthrough that can’t be found anywhere else in the world may be disappointed. But, the fact is that not only is there no silver bullet, but we don’t need one for progress, lots of progress. Masdar City embodies that reality and therein lies its greatest value. Its physical conception separates it from the countless number of theoretical (well-intentioned) urban models that wait to be constructed.

Masdar City is one of the most impressive and successful proactively sustainable urban spaces yet to be built. City officials hope to have the majority of the work done by the year 2030. However, within its promise for rapid growth may lie the greatest risk to its authenticity: expanding too quickly.

Some people may poke at Masdar for downshifting in response to the world’s financial crisis, but that slowed pace may very well have been a boon to the budding cityscape, allowing more time to study the effects of the city’s incremental growth. While everyone would like to see the city finished, having the project grow too fast could be the quickest route to compromising its values, turning it into more of a theme park than an authentic urban environment. The project will do more for the world of sustainability by being a better home rather than a better Epcot Center; a better place to live rather than a better place to "come and see.” If it continues to slowly and steadily grow and learn, Masdar City will one day become a model for replication — or else quickly become a mere exhibit of good intentions.

With a focus on sustainable design, Tyler Caine AIA LEED AP is an architect currently working at COOKFOX Architects in New York. He writes about the cultural interface of sustainability on his blog Intercon.