In Urban Design for an Urban Century: Shaping More Livable, Equitable, and Resilient Cities (2nd Edition), by Lance Jay Brown, David Dixon, historical trends and practices are used to explain current theories of urbanism. The following excerpt illustrates one such historical trend, detailing exactly how the advent of railroads and skyscrapers following the Industrial Revolution radically changed the urban landscape.

Before the Industrial Revolution, forces such as trade, agriculture, and defense determined the shape of cities in North America and Europe, whether planned or unplanned. How far a person could reasonably walk and the requirements of carts, wagons, and herds of animals heavily influenced the layout and dimensions of city streets regardless of the form the larger city took. Defensive strategy and technology also dictated form, but the resulting walls — and the need to guard them — often imposed smaller footprints than cities might otherwise have produced.

A jumble of uses marked preindustrial cities, where home and workplace were often either combined or located near one another. The inefficiency of walking great distances dictated that most land uses ended up as close neighbors, even in the most rigid of gridiron plans. No matter how noisy or obnoxious, different activities existed cheek by jowl and one atop another. Attempts to organize uses — particularly to banish offensive or disruptive ones from residential areas — rarely succeeded. Yet except for the most jarring juxtapositions—houses next to tanneries, living space over abattoirs, food markets next to fulling mills — preindustrial city dwellers generally accepted these conditions. The mix of residential and commercial uses added to the liveliness, interest, and excitement of a city.

The biggest settlements in the mid-nineteenth-century United States were largely port cities. Back in 1820, the ten largest cities included Boston, New York, Philadelphia, Baltimore, Charleston, New Orleans, and Salem — all major ports. Their populations ranged from more than one hundred thousand in New York to just twelve thousand in Salem. The completion of the Erie Canal in 1825 marked the first instance of an American infrastructure project influencing urban development — an impact in its day as significant as that of the interstate highway system in the twentieth century. By the close of the decade, Albany and Buffalo had both grown into major cities. Sailing ships lined wharves. The prime regulator of building height was the number of stairs a person could reasonably climb, which meant that few buildings rose higher than four stories and church steeples stood as the tallest structures on urban skylines. Noise in the streets came mostly from people, animals, and the wheels of carriages and carts.

The Industrial Revolution redrew this picture. Up to that point, U.S. manufacturers had relied primarily on waterpower and favored water for heavy transport, making rivers and streams preferred sites for operations. After the Civil War, coal and steam power replaced waterpower in industry and railroads dominated shipping. Now factories could locate almost anywhere, as long as they had access to a railroad to deliver coal (for making steam) and to carry away finished goods. But factories also needed labor, and the biggest labor pools were found in mercantile cities, where the markets for goods and the means of cross-oceanic transport were also close at hand. Suddenly, stately urban homes on quiet streets found themselves in the shadows of looming, high-decibel factories that operated around the clock. Huge new rail-marshaling yards came to dominate many neighborhoods and waterfronts.

Lewis Mumford has described the era:

Large-scale factory production transformed the industrial towns into dark hives, busily puffing, clanking and screeching, smoking for twelve and fourteen hours a day, sometimes going around the clock. . . . Extraordinary changes of scale took place in the masses of buildings and the areas they covered: vast structures were erected almost overnight. Men built in haste and had hardly time to repent of their mistakes before they tore down their original structures and built again, just as heedlessly. The newcomers . . . crowded into whatever was offered. It was a period of vast urban improvisation: makeshift hastily piled upon makeshift.

These newcomers represented a vast demographic change wrought by industry. At the beginning of the Industrial Revolution, most Americans lived on farms or in small towns. High factory wages and the opportunities for more varied lifestyles that city life offered gradually depopulated the countryside. The 1920 census showed that for the first time in U.S. history, more people lived in cities than on farms. A flood of immigrants from abroad joined this urban influx, creating crowding and chaos as cities ballooned in size. Between 1870 and 1920, New York City’s population grew more than sixfold; Chicago’s, ninefold. An expanding labor pool attracted more factories, further encouraging overcrowding. As in preindustrial cities, uses remained mixed together, and new housing sprouted up next to new factories. There was, at first, no other choice — people needed to get to work, and only the rich could afford to travel by horse-drawn conveyance.

To the heavens: Skyscrapers

As urban populations ballooned and new businesses crowded into city centers, market pressures mounted to use land more intensively, if only to earn more money for landowners. But it took technological breakthroughs to allow buildings to rise above five or six stories, the number of flights of stairs most people could climb. Because of the climb, in fact, owners generally had to reduce rents for higher floors in order to lease them. In 1852, Elisha Otis invented a safety brake for elevators, removing one limit on building height.

But standard construction technology — masonry walls and wooden columns and beams — still imposed strict limits on how high a building could rise. Each new floor required substantially thicker walls on the floors below to hold the weight it added; particularly on small sites, even a few extra stories demanded so much additional bulk at the base that some lower floors became too tiny to be useful. Inventor James Bogardus pioneered the use of cast iron to fabricate both facade and internal structure in a five-story structure he built in New York in 1848 – 49. For Bogardus, cast iron opened the door to fire resistance and manufactured building parts. But in the process he stumbled on the model for the curtain wall — a structural skeleton that provided strength and stability, with walls essentially hung like curtains from the frame. Bogardus’s first building predated London’s Crystal Palace by two years. In the 1880s, experiments with ways of adding steel framing to structures in both New York and Chicago quickly bore fruit; within a decade, architects and engineers had begun to master the use of internal steel skeletons to support higher buildings without sacrificing the usable space on any floor.

Despite these advances, the first true skyscrapers relied on the tried-and-true technique of masonry bearing walls, using metal only for interior structure. Burnham and Root’s sixteen-story Monadnock Building of 1884 – 92 followed this model in Chicago, but exclusively steel-framed buildings began to appear at about the same time. William Le Baron Jenney’s ten-story Home Insurance Building, built in Chicago in 1885, boasted one of the first skeletons of cast-iron columns and steel beams. Adler and Sullivan soon followed with steel-frame office towers in Chicago, Buffalo, and St. Louis. By 1903, Chicago’s Daniel H. Burnham had completed the twenty-one-story Fuller Building in New York City, which the public quickly redubbed the Flatiron Building because of its iconic triangular plan. All of these buildings followed an architectural model developed in Chicago: a tower structure; a clearly defined base; a straight, vertical shaft that filled the site and rose without interruption; and a distinctive final story to mark the top.

Within five years, the forty-one-story Singer Building, designed by Ernest Flagg, had overtaken the Flatiron Building as the tallest in New York. In 1908, the Metropolitan Life Insurance Company added to its existing building a fifty-two-story tower designed by Napoleon LeBrun, only to see it surpassed in 1913 by the fifty-five-story Woolworth Building designed by Cass Gilbert. The race was on, as captains of the Industrial Revolution and their armies of managers raised lofty new palaces above the laboring city.

Although U.S. cities had rapidly pushed outward, their focus remained their core commercial areas. As land values rose, new technology allowed more density and height, which further increased land values. For millennia, the design and pattern of cities had been horizontal. Now city planners and designers began to think about the vertical, and planned ever-taller buildings that would define streets and public spaces.

Ernest Flagg himself loathed the shadowed streets and stark canyons produced by the burgeoning crop of skyscrapers. Unable to hold back the tide, the Beaux Arts–trained Flagg shifted to reforming skyscraper design. Departing from his own earlier designs, which filled their sites in the same way the Flatiron Building did, Flagg advocated setting back from the property line a tower of ten or more stories so that it would fill only a portion of the building’s footprint. Doing so, he argued, would open all four sides of the tower element to design and view, and that “we should soon have a city of towers instead of a city of dismal ravines.” Flagg’s design for the Singer Building helped introduce this model. He rebuilt an 1896 structure to serve as its base, and the resulting Beaux Arts building rose more than 600 feet above Manhattan. Flagg’s approach, which influenced other towers, including the Woolworth Building, impacted later building regulations strongly.

To the horizons: Suburbs

The first industrial-era American suburbs were leafy enclaves for the rich. In these railroad suburbs, managers and owners traded the squalor of industrializing cities for a quiet, clean, and uncrowded setting. The onset of industrialization helped promote a new, idealized view of the outdoors reflected in the large volume of literature and sentiment on the subject that appeared between 1840 and 1860. Henry David Thoreau wrote Walden during this period, and an increasing flow of books about suburban cottages and landscaping were published in the emerging architectural press. Americans began to yearn for a new Eden in the healthful and wholesome countryside — an idyllic paradise of garden cottages far from the soot and din of the industrial city and, ironically, made possible by the era’s smoky icon, the railroad.

Chapter 2 Decentralization: The Rise and Decline of Industrial Cities 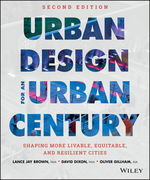