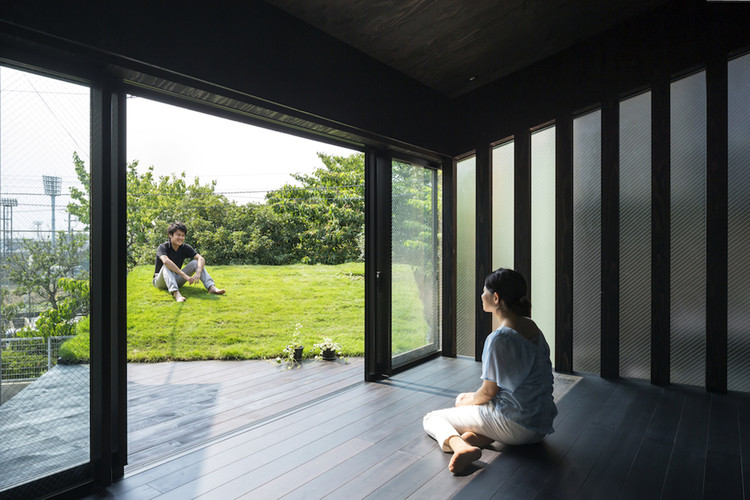 Text description provided by the architects. The site is surrounded by gentle hills, and a green area unfolds in front of the narrow-centered “V” shaped site. We attempted to adjust the distance to cities, as well as that to the natural environment, by utilizing the unique characteristics of the site, and three-dimensionally integrating the green area.

Specifically, the outline of the building was determined to follow the shape of the site. Two floating lawns were planned in a way such that they appear to be continuous with the green area in front. The lawn on the roof of the garage slopes down towards the living room, while directing a line of sight from the interior to trees in the park. Another lawn is made on the roof of the living space. It slopes down towards the street side, creating a rich green scenery along with the surrounding trees.

The floating roofs have a hat-like function that work as air conditioners to absorb solar radiation during summer, and as insulation to maintain the interior thermal environment during winter.

The interior space is a large wooden open space with a hollow core at the center. By manipulating the natural light, the distance to the street and the height difference with the street, the space becomes more private towards the back of the house. The central core directs natural light to the first-floor bathroom and its surroundings, while functioning as access to the roof and as a ventilation pipe. In addition, since it structurally bears a large portion of seismic forces, only 50mm thin pipes were required for pillars to support the garage roof with a floating lawn.

This building, which resembles an urbanized rich, green cave, maintains adequate distance from cities while enabling enjoyment of a fresh relationship with city or natural environments through the horizontal and vertical hollows where light enters.