Throughout her career, social activist and urban writer Jane Jacobs (May 4, 1916 – April 25, 2006) fought against corporate globalization and urged post-war urban planners and developers to remember the importance of community and the human scale. Despite having no formal training, she radically changed urban planning policy through the power of observation and personal experience. Her theories on how design can affect community and creativity continue to hold relevance today—influencing everything from the design of mega-cities to tiny office spaces.

In The Death and Life of Great American Cities (1961), her most well-known publication, Jacobs critiqued the short-sightedness of urban planners in the 1950s and argued that their assumptions about what makes a good city are actually detrimental to the human experience. For example, she contended that the creation of automobile infrastructure results in the unnatural division of pre-existing neighborhoods, creating unsafe environments and thereby severing community connections. In the years leading up to her death, she discussed ways in which communities could recover what they lost as a result of poor foresight in earlier city planning efforts.

Besides her written works, Jacobs is known for her urban activism, in particular her criticisms of New York's masterplanner Robert Moses, who at the time was engaged in a wholesale modernization of the city with car-led infrastructure, slum clearances and Le Corbusier-inspired housing blocks. The feud between these two arch-rivals is dramatic enough that there is now an opera based on the story.

Perhaps the most high-profile part of this battle was Jacobs' campaign to save her own neighborhood of Greenwich Village, which was designated by Moses for slum clearance and a new expressway. After a popular campaign of social activism—which included Jacobs' arrest—Moses' plans were largely abandoned, signaling a victory for Jacobs' ideals, if not exactly a personal victory; following her arrest, she left Greenwich Village and moved to Toronto.

Greenwich village is in many ways an effective case study not just of Jacobs' ideals at the time, but of the results of her theories. Many have criticized her ideas for apparently ignoring—even incubating—the processes of gentrification which in the intervening years have become one of the central challenges for cities. However, others have countered that when she made her arguments, in the era of modernization and suburban expansion, it was inconceivable that preservation of old neighborhoods would eventually lead to an increase in desirability and value.

After her first book, Jacobs broadened her scope and began to look at topics such as economics, morals, and social relations to create an oeuvre that approached a complete theory of what makes a city. Here is a complete list of her publications:

Read more about Jane Jacobs via the ArchDaily articles below: 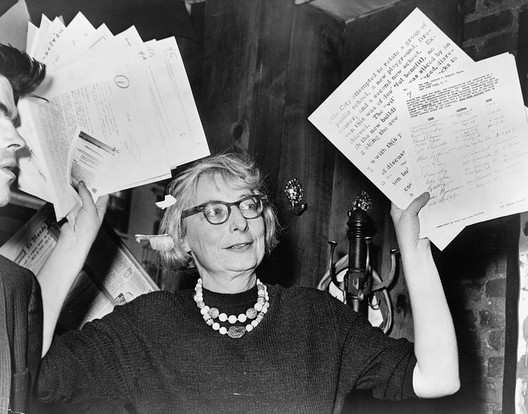